WIMBLEDON, England -- Six years ago, a 19-year-old Swiss prodigy beat Pete Sampras in the fourth round here at Wimbledon. The five-set defeat prevented Sampras from winning his fifth consecutive title at the All England Club and, in retrospect, announced a challenge to his supremacy in men's tennis.

That prodigy was named Roger Federer.

On Sunday, a 21-year-old Spanish prodigy pushed Federer into another contentious five-set match -- his first in a Grand Slam final. Rafael Nadal was attempting to stop Federer from joining Bjorn Borg as the only man to win five straight Wimbledon titles and, not insignificantly, equaling Borg's and Rod Laver's achievement of 11 Grand Slam singles titles.

In a larger context, another seismic shift in the tectonic plates of the game seemed to be in the offing.

Not so fast, Rafa.

Federer called it the biggest occasion of his life, which is saying something. That might explain why he lost his championship composure several times -- at one point swearing to chair umpire Carlos Ramos about the Hawk-Eye electronic line system -- but down 15-40 twice on his serve in the ultimate set, he managed to hold. Then, after Nadal had held serve 22 straight times, Federer broke him in the sixth game. After it was over, he broke down and cried.

"I was almost crying already when I was up 5-2," Federer said. "Then all of a sudden he's got game point and I'm just trying to stay focused. But it's hard … so many things go through your mind." 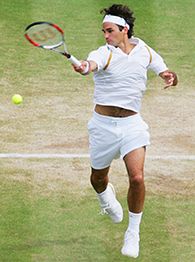 To begin with, perhaps, his place in the game?

As Federer has swiftly closed on the gold standards of men's tennis in recent years, the question has begged itself: Is he the best player ever?

The answer almost always has been qualified by time and totals. Federer consistently has been tracking ahead of Sampras, Borg, Laver and Roy Emerson, but it was always too early to call.

After Sunday's victory over Nadal, Federer finds himself legitimately among those great names. Sampras (14 Grand Slam titles) and Emerson (12) are the only ones still clear.

And here is an intriguing prospect: In a little more than a year's time -- if the course of history remains constant -- Federer could equal or surpass Sampras in the 2008 U.S. Open. He would be 27; Sampras won his last Grand Slam at 31. After equaling Borg's record of five straight Wimbledon crowns -- and with a streak of three straight wins at the U.S. Open and two in a row at the Australian -- this is closer to a certainty than a stretch.

"Yeah," Federer said, "obviously, it's on my mind. But it's not like anything where I say 'I have to beat this record, otherwise it's no good.'

"Pete Sampras is maybe the greatest player we ever had. So to come out and break his record, it's not the easiest thing, I know that. I don't know how much longer I can keep it up, but I definitely feel like I'm mentally and physically still fit to go on for many more years to come."

Borg, who watched Federer from the Royal Box for the second straight day, congratulated Federer later in the locker room. Standing before the cameras, they made slightly awkward small talk.

"It was such a relief at the end," Federer told him.

"Lots of pressure," replied Borg, understanding as perhaps no other human can. 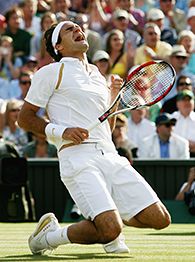 "To see him play is kind of like an artist," Borg said during the BBC broadcast. "I hope, really hope Roger will tie my record. Cannot happen to a nicer guy. No bad feelings."

So dominant is Federer that he has now appeared in nine consecutive Grand Slam finals, winning seven. He also has won 34 consecutive matches at Wimbledon -- a staggering achievement if you really think about it -- and a record 54 straight matches on grass.

From the beginning, it was a rousing match.

Federer raced out to a 6-3 lead in the first-set tiebreaker and won it with a lovely backhand cross-court volley into the open court. Nadal won the second set when he broke Federer, who was serving at 4-5, with a searing forehand passing shot. The third-set tiebreaker went to Federer when his sharply angled, cross-court backhand was sprayed long by Nadal. The fourth set was Nadal's from the beginning; he broke Federer in the very first game and never backed off.

On this sunny day, the only threatening cloud around Nadal, who seemed to be gaining momentum, was a balky right knee. He was leading 4-1 when he called for the trainer, who massaged his knee at length. This is not surprising, given that -- after Wednesday's victory in a five-set match that required five days to complete -- he played 16 sets in four matches over the next four days.

All you need to know about the final set -- and the match, really -- is the fifth point of the sixth game. After a stretch of saving all four break points on his serve, Federer won the first three points on Nadal's serve. Then, at 15-40, they played a point of startling beauty. It ended with a gorgeous forehand down the line by Federer and, suddenly, he was back in control.

Federer, who had 24 aces compared with just one for Nadal, managed, in retrospect, to win nearly every point. Federer's serve, according to Nadal, was the difference in the match.

After his semifinal win over Richard Gasquet, Federer was told that Borg believes he's capable of winning three, four or five more Wimbledon titles. Federer did not seem surprised.

"It's kind of obvious, to be honest," Federer said with typical matter-of-factness. "I've played so well the last few years, you would always put me as the favorite here at Wimbledon. So, of course, you think that right away.

"It was the same thing when Bjorn won his fourth or fifth. You would think he also could go on and win five more. It's not easy, you know. Pete Sampras did it. That's why he is an awesome, incredible athlete, incredible talent."

Federer added: "This is where maybe also mental strength comes more into it. Can you do it day in, day out? Bjorn left the game maybe a bit too early."