WIMBLEDON, England -- Wimbledon is getting its knickers in a twist. 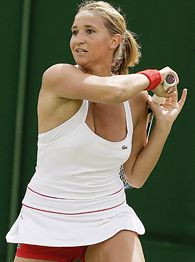 Tatiana Golovin had the Wimbledon referee reaching for his
rule book when she sought to appear on court for Thursday wearing red underwear.

Was Golovin violating the "predominantly white" dress code laid down by the tournament that is such a stickler for sartorial etiquette?

The fashion guardians of good taste at the world's most
genteel tennis tournament gave France's Golovin the go-ahead
after much discussion about hemlines and where they stopped and started.

Explaining the decision, a Wimbledon spokesman said on
Thursday: "They were cleared with the referee in advance by the
player. On the basis that they are underwear, they do not have to conform to the predominantly white rule.

"If they are above the hemline they are deemed to be underwear and not shorts."

The 19-year-old Golovin, who beat Taiwan's Hsieh Su-Wei 5-7, 6-3, 8-6 on Wednesday, returned to the court on Thursday
apparently unperturbed by the headlines her choice of underwear had prompted -- and wearing red underwear again.

Not many post-match news conferences at Wimbledon start with
the question, "Can I ask you about your knickers?"

Unabashed, the Russian-born player replied, "They say red
is the color that proves that you're strong and you're
confident, so I'm happy with my red knickers."

And Golovin assured reporters amid much laughter that she had more than one pair and would carry on wearing them at Wimbledon. She did so until Thursday, when the 17th seed was eliminated by Austria's Tamira Paszek in the second round 6-2, 3-6, 6-1.