<
>
Ultimate Standings Methodology
8yPeter Keating
NBA shot chart trivia: Guess that draft prospect
1yKirk Goldsberry and Kevin Pelton
Do you even watch basketball? Guess that All-Star
Golden State Warriors
1yKirk Goldsberry
Which NBA player had the best kicks in the first week of the season?
Boston Celtics
2yNick DePaula
How much do you know about the NBA's 2003 draft class?
2y
Poll: How's Dale Jr. doing in the TV booth?
2yBob Pockrass and Alisha Miller
Who had the best sneakers of the NBA playoffs' second round?
2yNick DePaula
Who had the best sneakers of the first round of the NBA playoffs?
2yNick DePaula
Sep 7, 2012 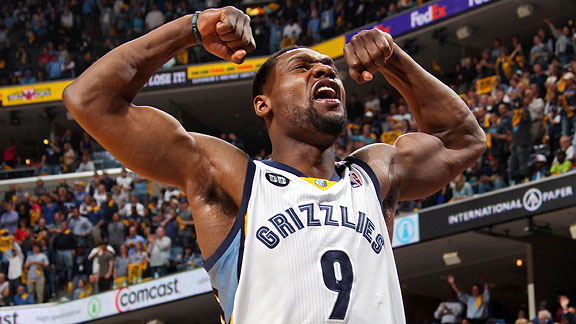 SINCE LAUNCHING the Ultimate Standings 10 years ago, we've stuck to our tried-and-true four-step approach to ranking every MLB, NBA, NFL and NHL team. First, with the help of Chicago consulting firm Maddock Douglas, we surveyed 1,011 sports fans across North America in the spring to determine what they want most in return for the emotion, money and time they invest in their favorite clubs. Our poll covered 25 topics, from "has likable players" to "provides an avenue for fans to give feedback to the franchise."

Your votes are in. The Memphis Grizzlies provide the best return on investment for fans in all of pro sports. Story

Next, through ESPN.com and NetReflector, a Seattle opinion research company, we asked fans to rate their favorite teams online in each category. (Thanks to the 59,298 of you who responded!) We grouped the grades into seven of the eight subjects you see at right.

For the remaining category, bang for the buck, we relied on calculations we've developed with researchers at the University of Oregon's Warsaw Sports Marketing Center to figure out how efficiently teams convert revenues from fans into performance on the field (including postseason victories).

Finally, we combined each team's score across all eight categories into a weighted average, based on the results of our national poll. Since fans said affordability was about 40 percent more important than stadium experience, for example, our formula reflects that.

The result: the 2013 Ultimate Standings, the only rankings that combine fan perspectives with an objective measure of how well teams turn dollars into wins. Ultimately, it all counts.