Newly crowned French Open champion Stan Wawrinka will be featured in this year's edition of ESPN The Magazine's The Body Issue, hitting newsstands July 10. In honor of the start of Wimbledon 2015, we're giving fans a sneak peek at what's underneath those (ugly) tennis shorts of his. Look for the complete Bodies We Want photo gallery on ESPN.com on July 6.

Here, Wawrinka talks with reporter Morty Ain about what it's taken to get his body into prime condition, and how that helped him defeat Novak Djokovic at Roland Garros.

My body is for my tennis, it's for my sport. I'm not a model at all. I don't work out to go to the beach, I work out to play well and to do well on the court.

It still feels like a dream. I'm very proud of what I did [winning the 2015 French Open]. Being Swiss, you grow up watching Roland Garros. As a junior, I celebrated my first big title here. And now I won it. Still tough to believe.

They are better in everything ... they are just better tennis players than all the rest. Those three guys [Novak Djokovic, Roger Federer, Rafael Nadal] are just too good, [Andy] Murray also. Look at how many Slams they won, especially Roger, Rafa and Novak. They are huge champions. They are so consistent. I need to work on my consistency. That's something I really want to improve. I don't compare myself to them. That's not my goal. My goal is to give my best every day, continue to play well and live wonderful moments like I did in Paris.

For me, motivation is easy. I enjoy what I'm doing and I'm lucky to play tennis. I enjoy the suffering. It's something quite natural for me to go on the court and suffer, and to go in the gym and to suffer, and to know the only way to get better is to work out -- that's what I like.

I can keep my fitness and strength at a high level for hours and hours and hours. I can play really powerful from the baseline and I can keep my level up -- that's why I'm playing well in five-set matches. I've done it many times, in many long matches, many times longer than four or five hours, and it wasn't a big problem for me. It's not a strategy to make matches longer, but I know that I can keep up. That is always good for my confidence. 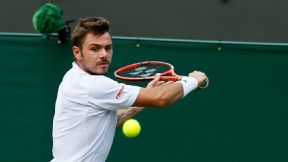 Last year, when I won my first Grand Slam [2014 Australian Open], I was mentally really strong. For me, it's about trying on every point -- even if you win, even if you lose easy, you need to fight and to show the opponent that you are always going to be there no matter the score. It's about trusting myself, being confident with myself.

You play nine to 10 months a year, you play 10 to 15 years, and at 35 you're done. It's a long year. It's tough physically and mentally, it's really tiring. So I think every player when they play tennis tries to save as much energy as they can. You need to be focusing on your tennis; you have time after your tennis career to do as many things as you want.

When I was younger, I was a little bit fat. I wasn't like big-time fat, I was just overweight -- maybe around when I was 13 or 14. At that time I wasn't practicing that much; tennis was just a hobby. But it wasn't easy to feel that way.

I'm happy with the way that I'm playing, the way I'm moving, the way I'm improving. I give credit to my fitness coach, Pierre Paganini. He has been so important for my success. We've been working together for more than 10 years. He's always involved in my decisions, my schedule, my preparation. Even if the conditions during the [2015 French Open] final were very hot, I was able to maintain my level and play a great match without important ups and downs.

I'm quite strong when I do core work. I think [my serve and one-handed backhand] come from that. It's coming from my movement and coming from all my body and also my back and my abs -- I do a lot of back and abs and core. It's all about the core exercises for warm-up.

"I have a Samuel Beckett quote tattooed on my arm. 'Ever Tried. Ever Failed. No Matter. Try Again. Fail Again. Fail Better.'" Stan Wawrinka

If you do the good work, the results will come. That's still the case for me -- it's about improving and trying to find solutions to be a better tennis player. Now I know it's not about the quantity [of the work], it's about the quality.

It took me a little bit of time, but in general I'm really happy with what I did last year. There were a lot of changes [after winning the 2014 Australian Open] outside the tennis court. There were so many opportunities, so much press, so many demands, so many new fans, new people hanging around. You just need to find a way to deal with it and keep the focus on the tennis.

I never expected to be that good, to have such a big career. Tennis is a big puzzle. It's not any more physical or mental; you have to have all the pieces first, and then you have to put all the pieces together. For me, it took me time.

I have a Samuel Beckett quote tattooed on my arm. I got it a few years ago now: "Ever Tried. Ever Failed. No Matter. Try Again. Fail Again. Fail Better." That's a little bit how I see life in general, but especially in tennis, because even if you play well, even if you're top-10, you still lose matches. So you need to accept that and take the positives from that.

I enjoy putting myself in situations where you are nervous, but you need to enjoy yourself also. I've done skydiving, bungee jumping. I quite like those sensations -- when you feel a little bit nervous and you don't really know where you are going. It's a quite good sensation that I love. I like the speed, I like everything.

You can always learn when you lose. For sure when I lost to Djokovic in the 2013 Australian Open in five sets, I was really close to beating him, and he was No. 1. That match showed me I was really close to them [the top three -- Federer, Djokovic, Nadal], and I was ready to maybe beat them in a Grand Slam.

There's only really one way to be at the top, and that's practicing -- practicing well and practicing hard. And enjoying what you do, because if you don't enjoy it then, it's always tough to wake up and go practice and suffer on the court.