I remember walking through the mall when a voice from the food court started shouting at me.

That was back in 1984, and it was the first time in my life where a video game mesmerized me to the point where I traded all my cash for quarters. I spent the afternoon blistering my fingers while battling the likes of Glass Joe, Bald Bull and Pizza Pasta in this amazing double monitor machine known as "Punch Out!!." 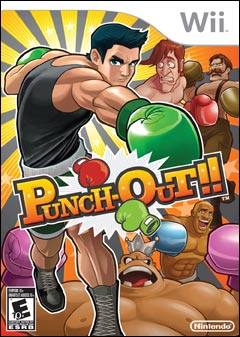 I had never seen anything like the game or the machine, and the fact that there was this voice telling me to pound my opponent's guts inside out just made the whole experience even more memorable. It was one of those days that really made me realize how much I love playing video games, and the love grew to obsession when "Mike Tyson's Punch Out!!" slugged its way onto the NES three years later.

From the quirky way you had to beat certain fighters (punch King Hippo in the mouth and he drops his shorts) to the pure elation you felt by actually beating Mike Tyson, we're talking about one of the greatest video game experiences of all time.

It made me wonder, though, if an updated Wii version could capture the old school charm while at the same time delivering a new experience to gamers looking for something more than a quick trip down reminisce street.

Well, after playing a final version of the new "Punch Out!!" during a recent trip to Nintendo's headquarters, the answer to that question is a resounding yes. Not only does the series still hold up, the Wii version provides new challenges that should make the old school faithful fall right back in love with the likes of Mac and Glass Joe, even if the face-tattooed one doesn't make an appearance this time around.

The first thing you should know about the game is that "Punch Out!!" is not a sequel, it's more of a reimagining of the series. Mac is no longer a green wireframe, in fact, the kid is all grown (and juiced) up as he steps into the ring against old and new rivals. Funny thing is, when you fight the classic characters like King Hippo, punching him in the mouth still makes him drop his shorts, signaling your time to finish him off with, what else, body blows.

Using the Wii controllers, gamers now throw punches in real life to throw punches in the game, and the longer you play, the more of a sweat starts to build. Build up enough points with that sweat and you can even throw the old star punch to knock opponents off their feet and leave them sprawling on the mat. The game also gives you the option to flip the Wii Remote around and simply play with the buttons like the NES version, but where is the fun in that? If they give you the option to throw punches, I'm standing up and letting my fists fly (there's only so much fun you can have boxing from your couch).

Fights are limited to three, three-minute rounds, but the furious action keeps you on your toes throughout as you try to figure out the puzzle patterns of each fighter in order to find your openings to clobber them with lefts and rights.

One of the new fighters I encountered was Disco Kid, a guy who loved to dance like Carlton from Fresh Prince before pounding you in the head. He actually has a couple of different dance moves he'll bust out before throwing a punch, and gamers need to figure out the correct direction to dodge in order to counter the knuckle sandwich heading towards Mac's mug.

Time the counter right, and it won't be long before Disco is sent flying, and if you are able to pull off the right moves during your match, the game will even trigger special knockout animations as a reward. Another cool addition is the way damage is animated on fighters as the rounds progress. Throw a bunch of body blows and you'll see welts form on the body of Von Kaiser. Work the noggin with countless jabs, and huge, cartoon lumps will form on the forehead. And the damage isn't limited to opponents as Mac will look beat up in between rounds as he gets some much needed advice from his corner man, Doc Louis.

As Mac works his way through the three circuits (four fighters in each circuit), he'll eventually fight for the title. But once you win the belt, that's not the end. In fact, some will say that's when the new game really begins as it will unlock Title Defense mode. Here, Mac must defend his championship against the same fighters he faced before, but there's a twist. Each of the fighters has learned from their first loss to Mac and has adjusted their styles accordingly. So Glass Joe, whose glass jaw was his downfall, now steps into the ring wearing head gear that you need to knock off in order to knock him out. And remember King Hippo and those body blows? The second time around, he comes to fight with a man hole cover strapped to his stomach to defend against those hammer fists to the belly. This gives even the most hardcore "Punch Out!!" fans a new challenge by switching up each fighter's puzzle while at the same time delivering tons of new animations and strategy to the mix.

But the additions to the franchise don't end there as "Punch Out!!" Wii is also the first game in the series to deliver multi-player bouts. The fights are split-screen with both players lacing them up as Mac, but there's an eye-popping addition to these boxing matches that I didn't expect.

As the fight progresses, Mac can build up something called Giga Mac juice. First player who fills their meter then goes through a metamorphosis and transforms into Giga Mac, a larger, crazier version of Mac with berserker-like attacks. Your whole move-set changes and the image on the TV even flips back from split to full screen as Giga Mac does his damage. If the non-Giga Mac player defends himself well, the juice will wear off and the action reverts back to split-screen fighting. But just because your opponent is Giga Mac, don't sweat it too much as I witnessed one fight where Mac knocked Giga Mac down with a swift uppercut to the monster's jaw.

And multi-player isn't even the last new feature to be announced for the game as Nintendo promises another surprise to the title once it ships to stores May 18. What will it be? I guess we'll just have to wait a few weeks to find out. Until then, all I have to say is, the more I played the new "Punch Out!!" the more I really enjoyed it. This is a game that not only brings back those nostalgic feelings of stacking tokens on arcade machines, it brings back one of the more challenging sports games in the history of the genre and doesn't let up one bit.

Remember all those hours you spent trying to get the best of Tyson or Super Macho Man? All the gameplay is back with the same old charm, only now Nintendo actually makes you sweat for the title by throwing the punches along with Mac.

And from what I've played so far, "Punch Out!!" is the first must-buy sports game for the Wii, even if I don't get my rematch with Iron Mike.