Looking to play as the Chargers with the old-school baby blue throwbacks? How about adding the classic yellow and brown Broncos uniform (complete with vertical striped socks) to your current Denver jersey combo via "Madden's" uniform mix and match?

These choices and more will all become available Sept. 24 via downloadable content for "Madden NFL 10," as EA Sports introduces a special AFL Legacy Pack to the game to help commemorate the 50th anniversary of the American Football League.

"Fans should be excited because we're allowing you to celebrate the AFL anniversary alongside the NFL," says "Madden 10's" senior producer Phil Frazier. "We've all seen some of the early AFL games in preseason and they are ridiculously cool. The retro uniforms, the retro field art, and even the officials wearing orange uniforms. The whole package is really unique and we capture that same feeling in the AFL Legacy Pack. 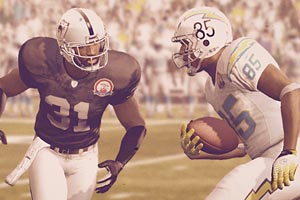 "My favorite feature has to be the retro-style presentation. Everything from the banners to the film grain make the game look really old-school. It's amazing how new the game feels when this setting is turned on."

Frazier also spilled the details on all of the new Madden Moments the AFL pack will include: "We have added five new Madden Moments, all themed from the AFL era, and all allowing you to rewrite history," he reveals. "The first is from Jan. 1, 1961, a championship game between the Chargers and the Oilers. The second is from the longest championship game ever played. It occurred on Dec. 23, 1962. The third moment features the Chargers and the Patriots as the Patriots try to take away the one title the Chargers have ever earned back on Jan. 5, 1964. The fourth moment features the Broncos and the Bills, which was an incredible game that ended in a tie back on Nov. 27, 1960. Can you break that tie? Finally, the last moment features the Chiefs and the Raiders in the final AFL game on Jan. 1, 1970. Can you take that victory away from the Chiefs?"

On top of that, the pack will also include five new "Madden 10" achievements and trophies.
"They involve wearing AFL jerseys in an online game, finishing one of our all-new AFL Madden Moments with AFL presentation turned on, winning exhibition and franchise games with AFL presentation turned on, and one secret achievement," says Frazier, who will provide only the following hint on the final, secret achievement: It involves a missed field goal and a touchdown on the same play.

So what else can gamers expect for seven bucks? Here is a list of the AFL Legacy pack features:

16 AFL 50th Anniversary Throwback uniforms (both home and away)

And, according to Frazier, this might not be the last of the "Madden 10" DLC.

"The Madden AFL Legacy Pack is the first fully featured post-release content we've provided and we hope it's successful," he told ESPN. "We do hope to release future NFL-based content but aren't yet ready to make any formal announcements. Stay tuned."