It's the final week of the regular season for the WNBA. But if this were March Madness, you'd figure the NCAA selection committee would give the New York Liberty a pretty good seed, despite the loss of Ann Wauters. 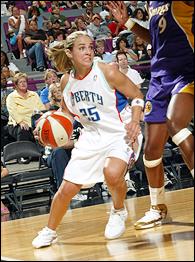 I don't know what the Liberty's RPI would be, but their "down the stretch" performance is pretty impressive. Before Tuesday night's 82-69 overtime loss to Washington, New York won five in a row, the most recent at East Division titan Connecticut over the weekend. The Liberty are 7-4 in their past 11 games, with losses to Connecticut (twice), Detroit and the Mystics. There are two games left: Thursday at worst-in-the-league Charlotte and Saturday at fellow playoff team Indiana.

And even though New York got tripped up a bit on Tuesday, coach Pat Coyle's team still heads into the postseason with bigger expectations than one would have thought earlier this summer.

Flash back to July 2, the end of a three-game skid that put the Liberty at 5-7 (even worse, two of the losses were to league doormats Charlotte and San Antonio, albeit on the road). In between was a home loss to Sacramento, in which the Liberty put up a putrid 50 points.

At that juncture, a lot of Liberty fans likely were not thinking about the playoffs at all. They were still trying to figure out what the Liberty's draft "strategy" was in April (good luck), grousing about coaching, missing the player that Tari Phillips (now with the Comets) used to be when she played for the Liberty, and resigning themselves to a lackluster season.

But it hasn't turned out that way. The road to recovery began July 5 with a 12-point win at Los Angeles. And while it hasn't been all smooth sailing since, the Liberty have been resilient.

Wauters, the Liberty's 6-foot-4 center, suffered a broken bone in her right hand Aug. 12. If she comes back this season, it would be late in the playoffs. That was a big loss for New York, yet the Liberty keep finding ways to win games.

Can New York win enough of them to take the WNBA title? Well, the Liberty aren't likely to pull that off this year. But never say never, right? Just the fact that New York is playing this well with the postseason coming up is noteworthy. It's fair to say now that the Liberty are making the most of what they have.

"We've got great free-throw shooters on this team and really make people pay at the end," Liberty guard Becky Hammon said. "We've also got a great bench, and we expect them to do things."

But, more than anything, this team is about its starters. Russia's Elena Baranova has been consistent and reliable this season, just as she was last year for New York. With Wauters out, though, Baranova carries more of the load.

Helping with that is Shameka Christon, who started a handful of games previously but now becomes a key part of the starting lineup with Wauters out. The Liberty's top draft pick in 2004, the 6-1 Christon is 3 inches shorter than Wauters, and that hurts New York on the boards. But Christon is the 3-point threat Wauters isn't. And Christon is not worried about having added responsibility.

"I don't look at it as any pressure," Christon said. Then she laughed and added, "If you told me to go fly a plane, then I'd be, 'Oh, wait a minute.' But this is just playing basketball. I have to learn a new spot and try to bang with the big girls, but it's still just basketball."

Christon is from Hot Springs, Ark., which means she shares something cool with the Liberty's three other American starters. They're the essence of what New York City is about: A place where you can make it big no matter where you're from.

Hammon's hometown is Rapid City, S.D. Vickie Johnson is from Shreveport, La. Crystal Robinson is from Atoka, Okla. VJ has been with the Liberty since the WNBA started in 1997; Robinson and Hammon joined her in New York in 1999.

Hammon leads the team in scoring, assists and steals. And while she is still near the top of the league in turnovers, that's just something you can accept considering the way she plays.

Former Liberty coach Richie Adubato, who came to the Liberty the same season Hammon and Robinson did, is now with Washington. He has called Robinson as good a defender as he has ever coached. And having watched an undrafted Hammon develop her versatility, he still sounds like her proud coach when he says, "Becky has been at it six years now, and she's just gotten better and better every year. Right now, it's almost impossible to guard her."

It would be fun to see this trio, who have come to define the Liberty, win a WNBA title. And the Liberty getting a championship would be good for the league. Madison Square Garden can be as fun an atmosphere for a game as there is in the WNBA.

Obviously, you start with the fact that it's New York City. I'm a Midwesterner, and I go to Manhattan 35-40 times a year  uh, that's Manhattan, Kansas. I see the Big Apple only once or twice a year, which allows me to never stop finding it awe-inspiring, breathtaking and the greatest place on Earth to visit.

And of course, MSG is world-famous as a sports venue. But in spite of everything else that goes on and has gone on there, the Liberty have figuratively carved their initials into the place.

I love the "L-I-B-E-R-T-Y" chant  and Maddie the mascot  and the fact that they play the "Partridge Family" theme song  and the timeout contests (which are always funny and usually only mildly humiliating to the participants)  and the "Torch Patrol" dancers, all of whom I imagine to be waiting for their big break on Broadway any day now.

Liberty fans have been through more than their share of angst-ridden "almosts" in the league's previous eight seasons. So probably not a single one of them is actually thinking this is their year. They know the team has holes and now practically will live or die by 3-pointers (New York leads the league with 190). They know that it will be extremely hard to even get through the Eastern Conference playoffs, let alone win the league finals.

Still, there's good cheer in Libertyland, and there should be. Because this team appears to have saved its best for last.

Mechelle Voepel of The Kansas City Star is a regular contributor to ESPN.com. She can be reached at mvoepel@kcstar.com.