The Minnesota Lynx media guide says that Michele Van Gorp "lives with her spouse in Vermont." 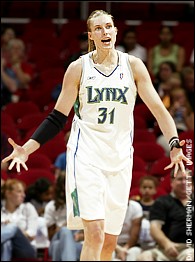 The team has known for years that the partner mentioned is a woman named Kyleen, with whom Van Gorp celebrated a civil union four years ago, according to a Minneapolis Star Tribune report based on a Twin Cities magazine article.

The circle of people in the know will grow considerably now that Van Gorp has become the only current WNBA player to publicly acknowledge being a lesbian, which she did in a recent issue of Lavender, a magazine that caters to Minnesota's gay-lesbian-bisexual-transgender community. The Star Tribune article increases the audience considerably.

The Lynx center, who is 6-6 and currently on the injured list, has never tried to hide that she is gay, but she says she doesn't want to get in anybody's face about it, according to the newspaper.

"It's no big deal," Van Gorp said matter-of-factly of her recent public disclosure. "It's just who I am."

However, it is a big deal to many because being openly gay is nearly unheard of in men's or women's professional sports today, although there always seem to be rumors, especially about female athletes. The Star Tribune suggests that the rumors don't get confirmed more often because athletes worry about losing endorsement opportunities, causing distractions or perpetuating stereotypes.

"It's as rare as hen's teeth," the paper quotes Pat Griffin -- a social justice professor at UMass-Amherst whose book, "Strong Women, Deep Closets," was the first to analyze the lesbian experience in sports -- as saying. "Every time an athlete comes out, it makes it easier for other athletes. The closet is no picnic. ... With younger athletes struggling with their identities, it literally saves lives to have athletes come out as role models."

Van Gorp, who is 27, told the Star Tribune that she doesn't consider the Lavender article her coming out because she has "never been in the closet." Teammates and Lynx fans have seen the Duke graduate with Kyleen at team events and in public, according to the paper.

Van Gorp, who was 6-4 by eighth grade, told the paper that the teasing she faced growing up was all because of her height.

"I didn't have to deal with the gay issue then, not when you're the tallest person in the whole freaking school," she said.

Van Gorp never hid her relationship with Kyleen, whom she met while in college, from her family and friends, the Star Tribune reported. She told the paper that she felt Kyleen's involvement with the team became a problem when she was with the New York Liberty but that she feels her situation is accepted in Minnesota.

"She's very comfortable with her lifestyle -- very confident and open," Lynx coach Suzie McConnell Serio told the Star Tribune. "That's a personal choice, and I'll support my players in whatever choices they make."

Although tennis players Martina Navratilova and Amelie Mauresmo have been public about their sexual orientation for years and golfer Rosie Jones came out in March, going public is even rarer in team sports. Before Van Gorp, former Liberty player Sue Wicks had been the only member of a female professional team to publicly come out while still playing, the Star Tribune reported.

"There's a certain level of ... trying to protect the team from controversy," Griffin told the newspaper.

The professor and others say things might be getting easier, albeit slowly, for openly gay athletes, according to the Star Tribune. These athletes, they said, now face fewer negative consequences, monetary or otherwise.

Although Navratilova was baited and ostracized, including by sponsors, when she came out in 1981, Mauresmo met much less resistance in 2000 and Jones hasn't reported any negative feedback, the newspaper reported.

"The stage is being set," said Helen Carroll, director of the National Center for Lesbian Rights and coordinator of the NCAA-sponsored Project to Eliminate Homophobia in Sports. "People want to be able to be who they are, not have to lie to people around them about who they are. It doesn't matter who they sleep with; it's who they are."

Several WNBA teams openly market to lesbians, who historically have made up a sizable portion of their fans. As the Star Tribune points out, that's just smart marketing.

Although the league has no overall policy on marketing efforts, "we've had a good response from the lesbian community, and some of our teams do actively target that audience in their ticket sales efforts," WNBA President Val Ackerman told the newspaper. "It's been win-win. So, yeah, it is good business -- especially in this day and age when many companies are understanding of their customer bases."

Although Van Gorp has broadened the public awareness of her sexual orientation, she made it clear to the media that she doesn't want to become the poster woman for WNBA lesbians and that her orientation has no bearing on her play.

"It doesn't really matter," she said. "In the long run, it's a league about basketball."