<
>
Lynx pick LSU's Augustus first in WNBA draft
Minnesota Lynx
15y
The dissolution of James Harden and the Rockets, in their own words
Houston Rockets
12hTim MacMahon
Yankees' Boone has surgery to get pacemaker
New York Yankees
5h
Sheriff gets warrant for black box in Tiger SUV
10h
Jets GM open to Darnold offers, not trade for star
New York Jets
4hRich Cimini
Source: Lions, ex-Raiders WR Williams get deal
Detroit Lions
3h
Ex-NFL TE Winslow II gets 14-year sentence
5h
Raiders GM hails Carr as one of NFL's best QBs
Las Vegas Raiders
3hPaul Gutierrez
Indians prez: 'Not able to' comment on Callaway
Cleveland Indians
5h
Altobelli, who managed O's to '83 title, dies at 88
Baltimore Orioles
7h
Dembele, Pique 8/10 as Barcelona rally to reach Copa del Rey final
57mSam Marsden
The moments before and after everything changed for Tiger Woods
12hBob Harig and Ramona Shelburne
Should UConn's Paige Bueckers win national player of the year?
UConn Huskies
9hMechelle Voepel
Lesser-known stories of J.J. Watt's impact on Houston off the field
Houston Texans
13hSarah Barshop
NHL Power Rankings: Key trends for all 31 teams
Anaheim Ducks
12hEmily Kaplan
'I had this fire in me': Jan Blachowicz has powered his way from nearly cut to UFC champ
11hBrett Okamoto
Euro 2020, 100 Days Out: Will the tournament go ahead? Will fans be allowed?
15hMark Ogden
'We went into panic mode': What it was like trying to run a PGA Tour event in the year of the pandemic
2dBob Harig
Free-agency game plans for all 32 NFL teams: Who's coming back, available and could be added
2dNFL Nation
'He was a basketball genius': How a 17-year-old Kobe wowed Jerry West and the Lakers
Los Angeles Lakers
2dDavid Fleming
Women's Champions League: USWNT stars in action, Lyon again the team to beat
1dKathleen McNamee
Boxing, MMA and her own PPV: Claressa Shields bets big on herself in 2021
2dMichael Rothstein
Aston Martin reveals first F1 car for 2021 debut
9hESPN
Apr 5, 2006

BOSTON -- Seimone Augustus ran the gamut of emotions this
weekend in Boston.

Hoping to win the NCAA women's title with LSU, the nation's
leading scorer and the Lady Tigers were ousted in the national
semifinal Sunday night by Duke. Three days later, Augustus was back
on top as the No. 1 pick in the WNBA draft.

"After the semifinal loss, I mainly went back to my room and
read books to try to keep my mind off of what just happened,"
Augustus said. "Once I got with the WNBA staff, it was focusing on
trying to be prepared for the draft, getting ready for my career
and my future."

The two-time AP Player of the Year led the nation in scoring
with 23 points a game. She also led the Lady Tigers to three
straight Final Fours.

Baylor's Sophia Young was chosen by the San Antonio Silver
Stars, and the Los Angeles Sparks took UCLA's Lisa Willis to round
out the top five.

Augustus used her fluid jump shot to put up impressive numbers
from the moment she stepped on campus, a Baton Rouge high school
star hailed as the biggest recruiting catch in LSU history.

She scored 27 points in her debut against Arizona and has scored
in double figures an NCAA-record 132 times in her 140 games. She
finished her career with 2,702 points.

Instead of carrying a team, Augustus is looking forward to
fitting in as a rookie in the WNBA.

"I kind of relate it back to my freshman year coming into
college. You have to get into that comfort zone," she said. "You
learn your teammates, learn their personalities and see where you
fit in. You just have to use that year to get yourself together,
get your thoughts together and your mindset ready for this
professional league." 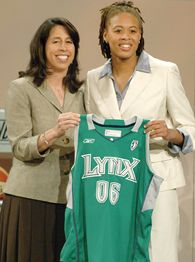 The Lynx finished 14-20 last season and won the league's draft
lottery to gain the No. 1 pick. By trading All-Star Katie Smith to
the Detroit Shock last summer, the Lynx acquired an extra
first-round selection, the seventh overall.

Lynx coach Suzie McConnell Serio said team officials had their
minds made up about Augustus long ago.

"She just separated herself from the rest of her senior
class," McConnell Serio said. "Nobody's been able to stop her,
but when they've contained her they've sent double and triple teams
at her, leaving other players open on the floor."

Pondexter will join a backcourt that includes All-Star Diana
Taurasi. Pondexter, a 5-9 Chicago native, has sported a WNBA tattoo
on her arm since high school in anticipation of this day.

"It's just overwhelming just knowing your dream is here in
front of you," Pondexter. "I've admired Taurasi for a long time,
and just to have the opportunity to play with her, I think I will
learn a lot."

"I think Cappie will easily complement Diana Taurasi, and I
know 'D' is going to help Cappie because she'll take some of the
heat off her," Westhead said.

The draft capped a whirlwind weekend for many of the new
professionals. Currie was across town on the floor of TD Banknorth
Garden around midnight trying to help win Duke's first national
title. The Blue Devils lost 78-75 in overtime to Maryland.

Currie, who came back for a fifth year for a shot at the title,
scored 22 points.

"There hasn't been any time really to reflect on everything
that has happened over the past day," Currie said. "I'm extremely
happy, and very happy to be going to Charlotte. My college career
didn't end like I wanted it to end, but I'm taking the next step
and am looking forward to what the future holds for me."

"She's a very explosive player," said Sting coach Muggsy
Bogues. "She's already a scorer. You don't have to teach her much
on the perimeter."

Currie could also help boost ticket sales for the Sting by
giving them a player with local appeal for their first season in a
new downtown arena.

Young helped lead the Bears to their first NCAA title last year
and averaged 17.8 points and 9.8 rebounds in college.

A relative newcomer to the game, she came to the United States
seven years ago from a tiny Caribbean island of St. Vincent, with
hopes of refining her basketball skills. The 6-1 forward had the
biggest game of her life in the 2005 title win against Michigan
State with 26 points and nine rebounds, and was named the Final
Four's most outstanding player.

"It has been such a remarkable journey," she said. "I just
took this opportunity and didn't know what I had in store. The
[WNBA] is something you look forward to since you are a little girl
and now that it is finally here, it's excitement mixed with
nervousness."

Willis, a 5-11 guard, is the Bruins' all-time 3-pointer shooter
(186). The Sparks had the fifth pick because of an offseason trade
with Washington that sent Nikki Teasley to the Mystics for Temeka
Johnson and Murriel Page.

Celebrating its 10th year, the league held the draft the day
after the women's NCAA Final Four in the same city as the
championship for the first time. Previous drafts were held at the
NBA studios in Secaucus, N.J.

There were three rounds in Wednesday's draft and 42 picks
overall.