Becky Hammon sat near the end of the New York Liberty bench. In the summer of 1999, her rookie season in the WNBA, she played sparingly, registering six minutes a game. Some games, she didn't play at all. In training camp, and through the beginning of that season, the veterans on the Liberty knocked her around like the new kid at recess.

Hammon kept her mouth shut. She took the hits. She got up. She waited.

She waited for a moment like the one after a Liberty playoff game later that season. During the game, Liberty coach Richie Adubato looked down the bench at his rookie guard and considered sticking her in the mix. Adubato thought about it. He wanted to call her name, send her to the scorer's table. But he didn't -- too young, too much pressure, he reasoned.

Adubato pulled Hammon aside after the game and told her his thought process. Hammon responded like the WNBA All-Star she became: Don't let that keep you from putting me in a game. I'm going to go out there and play fearlessly, and you have to be fearless with me.

During Game 2 of the 1999 WNBA Finals against the Houston Comets, Adubato played Hammon. She scored 10 points (four times her average) and the Liberty rallied to force Game 3. The next season, Hammon averaged 11 points for New York. Fans entering Madison Square Garden began buying her jersey. Pretty soon, the 5-foot-6 girl from Rapid City, S.D., became the face of the franchise. She was on billboards in Manhattan. If she can make it there, she can make it

In San Antonio. On draft day in April, the Liberty traded Hammon to the Silver Stars. The move blindsided the star guard, who will play in colors other than blue and orange for the first time in her eight-year WNBA career.
It'd be easy to point to that playoff game against Houston and say, "This is when Becky Hammon proved herself." But that would be too easy. That would exclude the gym rat days growing up in Rapid City. The four years at Colorado State University, where she whipped the town into a frenzy. The spring she gutted out a spot on the Liberty roster.

And now, the challenge that awaits her in a new city as the point guard for a club with championship aspirations.
Really, when it comes right down to it, Hammon is always proving herself. 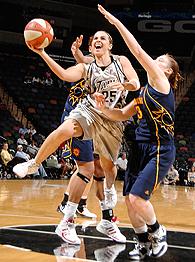 So, what does scoring 2,740 points at CSU to pass Keith Van Horn for the WAC record get you? If you're Hammon, it doesn't get you drafted in the 1999 WNBA draft. (In fairness to WNBA general managers, the '99 draft included veteran players from the disbanded American Basketball League. Out of 50 selections, only 12 college players were picked.)

The league assigned Hammon to New York as a free agent. The organization told Hammon her chances of making the team were slim. She packed accordingly -- filling a bag with enough gear for a week, maybe two. She knew the Liberty would be looking for reasons to cut a small, slow guard from a mid-major school trying to earn a spot on a marquee WNBA team when ABL professionals swarmed for every available roster spot.

That year was Adubato's first coaching women's basketball. In 1996-97, he served as interim head coach for the Orlando Magic. He spent 19 seasons in the NBA as an assistant and head coach. Hammon believes Adubato, who cared only about her ability on the court, opened a door that would otherwise have remained closed.

"Because he was a new coach, from the men's side, he wasn't caught up in the women's politics," Hammon said. "He didn't care that I didn't go to a big school. Had I been brought in with a coach from the women's basketball world, I don't think I would have gotten a fair shake."

Fairly well shaken could describe Hammon after each day of preseason camp. She began questioning herself. The Liberty veterans, Hammon said, "would take their shots and see who could hit me the hardest." The goal? To break this rookie guard from  wait, where did she play her college ball?

Later, Adubato told her he couldn't cut her because he couldn't remember her missing any shots.

Liberty fans still wear Hammon jerseys to MSG. In a preseason game against Houston on Saturday, dozens still wore the No. 25 jersey.

Hammon found out about the trade while watching ESPN. The move shipped Hammon and a second-round pick in 2008 to San Antonio for Ohio State All-American Jessica Davenport and a 2008 first-round pick. The news arrived without warning from the Liberty front office. Hammon said she was shocked. New York officials declined to comment on their lack of communication, but said the trade was made "with decidedly mixed emotions."

The emotions of many of the Liberty faithful appear clear: They are disappointed. Michelle Frumberg, a season-ticket holder since the league's inception, heard about the trade on draft day, too. She said she felt the decision was a mistake, and that her opinion was not in the minority.

Perhaps Rachel Wolff of Brooklyn summarized best the feelings of Liberty fans: "She was great  she is great. She's just not great here." 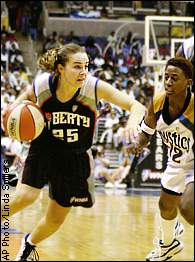 In 1995, as college freshmen, Hammon and teammate Katie Cronin walked through Moby Arena on the way to their dorm room. They stopped and looked up from the court and said, "Some day we're going to fill this place." The Rams averaged 751 fans per game the previous season.

In 1999, Hammon had the Rams ranked No. 4 in the nation. CSU, a No. 2 seed, hosted the first and second rounds of the 1999 NCAA Tournament. A sold-out, green-and-gold crowd of 8,741 watched CSU advance to the Sweet 16 for the first time in program history. During that season, CSU averaged crowds of 4,765. When Hammon and Cronin went to Outback Steakhouse for dinner, fans offered to pay for their food. (The duo declined, per NCAA rules.)

What happened in Fort Collins, Colo., could have happened to a number of college towns across the country -- had they given Hammon the opportunity. But instead of begging for her services, a lot of top-tier college programs crossed her off their recruiting lists. One school called to tell her they were no longer interested. Hammon remembers a big shot on the recruiting circuit telling her she couldn't play at Purdue (she later scored 23 points against the Boilermakers). He told her to "think about schools a little bit lower."

Tom Collen inherited Hammon when he took over the CSU program in 1997. He came from Arkansas, where he coordinated recruiting. By 1997, Hammon was 1,212 points into her career. Collen, poking fun at himself, went back and looked at his recruiting notes. He reported his findings to the Hammon family. Next to Becky's name he had written: "Small, slow, white girl."

When Hammon was a younger small, slow, white girl, she played two-on-two with her father, Martin, against her older brother, Matt, and his friend, Rod. They played, weather permitting, every night. It was there that Hammon developed her creativity. Her spin on the ball, her deceptive moves to the basket; they were born of necessity.

Silver Stars coach Dan Hughes called New York every year since 2003 to see if the Liberty would trade Hammon. He said the deal between the two clubs was in the planning stages for a while, but the discussions took on more sincerity as draft day approached.

Now Hughes, who has coached against Hammon 30 or 40 times, has his guard. He also has veterans Ruth Riley, Vickie Johnson and Helen Darling to complement a bench filled with young talent like Kendra Wecker, Sophia Young and Shanna Crossley.

"I think the general feeling here is folks are anxious for us -- to watch us, to see us, to grow with us," Hughes said. "We wanted to be good, now."

Hammon misses New York. She misses the city, the Garden and her teammates. Still, she is excited about the chemistry building on the Silver Stars. She said it's good to be back in a locker room with championship talk. But with that talk comes more questions about her ability. Why did the Liberty trade her? Is she past her prime? Can she win a title in San Antonio?

With these new questions pending, Hammon does the same thing that got her through seasons past: She laughs as much as possible. On a recent preseason road trip, her abs hurt from laughing. She's constantly quoting movies, especially "Talladega Nights," "Anchorman" and "Napolean Dynamite." She does a mean Jim Carrey as The Grinch impression, but says it requires a level of comfort to contort her face in such a way. She'll bust loose with the imitation when least expected.

As unexpected as, say, those nifty shots in the lane that baffle opposing post players; or that record-setting college career; or those eight years as the golden girl in a city known for its cynicism.

Kate Fagan of the Glens Falls Post-Star can be reached at kfagan3@yahoo.com.