UNCASVILLE, Conn. (AP) -- The sixth WNBA All-Star game had
something for everyone: off-the chart scoring, a dunk, horseplay
and even a tearful reunion.
The only thing missing Saturday was a win for the East. 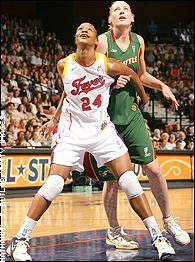 Behind veteran Sheryl Swoopes, the West ran its record to 6-0,
beating the East 122-99 in the highest scoring All-Star game in
WNBA history.
"I told our team I wanted to get 100," East coach Mike
Thibault said. "I didn't mean the other team."
Swoopes had 15 points, most of them in the first half to get the
West out to solid start. It was the West's largest margin of
victory, and East's highest point total.
With 11 Olympians in the game, the high score was almost a
given. But it was the impromptu slam-dunk contest in the closing
seconds that brought the sellout crowd of 9,168 at the Mohegan Sun
Arena to its feet.
Detroit's Deanna Nolan, a 6-foot guard, made a couple runs at a
dunk, soaring to the basket from a wide-open lane and narrowly
missing both shots.
It took 6-5 Lisa Leslie, the first woman to dunk in the league,
to finally nail it down. The Los Angeles center's one-handed slam
with 17 seconds remaining wound up being the final points of the
game.
"You've got a lot of points on the board. You've got rebounds,
you've got a dunk. What more do you want?," West coach Anne
Donovan said.
How about a heartwarming reunion?
For East reserve Taj McWilliams-Franklin, of Connecticut, the
highlight of her day was off the court. Her husband, Reggie
Franklin, a sergeant in the U.S. Army, surprised her in the second
half with an early homecoming. Franklin, who is stationed in Italy,
was due to arrive next week.
After a long, tearful embrace near the East bench, he made his
way into the stands where their 2{-year-old daughter was waiting.
"He's a sweet man and I'm very lucky to have him in my life,"
McWilliams-Franklin said.
It was Swoopes' fifth All-Star game and the Houston Comets star
was out to show she still has what it takes.
"I wanted to represent not just for the old players but for the
experienced players," Swoopes said.
Also, her 8-year-old son, Jordan, who joined his mom at center
court immediately after the game, told her in the morning she would
win the MVP -- the first one for Swoopes, one of the league's
founding players.
Hampered by nagging injuries last season, Swoopes said the joy
has returned to her game this year.
"I came into this season with a completely different
attitude," Swoopes said. "I'm enjoying the game, I've found that
passion."
Swoopes also was a target of some good-natured ribbing from her
opponents. Before attempting the second of two free throws late in
the first half, Swoopes was being needled by East point guard Dawn
Staley.
"C'mon this is the All-Star game," Staley yelled from the
bench. "Close your eyes."
She did and the ball clanked off the iron.
The West didn't miss much, however.
Minnesota's Katie Smith added 16 points, hitting 4-of-6
3-pointers, and Los Angeles' Chamique Holdsclaw added 14 for the
West. Sacramento's Yolanda Griffith had a team-high 14 rebounds.
Nolan led the East with 20 points. Indiana's Tamika Catchings
and New York's Becky Hammon finished with 18 points each.
"I think we came out and we were really motivated, very
inspired to play this game -- especially with all the talk about
East vs. West," Catchings said. "Unfortunately, we let the game
get away from us."
In all, 12 players scored in double figures.
Catchings got the East off and running early with three straight
baskets, but Swoopes and Seattle's Sue Bird quickly brought the
West back, each hitting a 3-pointer. With plenty of fresh legs on
the bench to spell them, the starters on both sides had no
intention of slowing down the pace.
Instead, there was plenty of run-and-gun during the first 20
minutes, and the West went into the break with a 52-43 lead,
punctuated by a 3-pointer by Phoenix's Diana Taurasi with 10
seconds left.
Nolan had one more shot at a dunk with less than 10 seconds left
in the game and drew plenty of encouragement from both benches. The
West defenders even cleared the lane for her, but the spring-loaded
guard known as "Tweety," opted to fire up a 3 that missed the
mark as time expired.
"I have to save a little more energy for the rest of the
season," she said.