This story appears in ESPN The Magazine's May 23 WNBA Issue. Subscribe today! For more WNBA20 content, visit our WNBA20 page.

When the WNBA tipped off in 1997, life was quite different than it is today for LGBT Americans. Conversations about sexual identity were much more clouded by the HIV/AIDS crisis, which was at its peak; marriage equality was not recognized anywhere in the U.S., while same-sex sexual activity was criminalized in 22 states. The WNBA? It was still nearly a decade from one of its stars, Sheryl Swoopes, coming out publicly.

ESPN The Magazine The Podcast 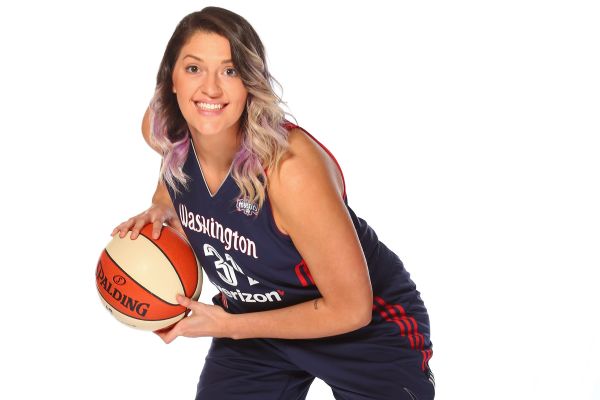 But as the league gets ready to tip off in 2016, most of its younger players, who came of age in the time of It Gets Better, Glee and Gaga, view intolerance in the WNBA as inconceivable, like life without the league itself. So as the fight for equality is still being waged in courtrooms and restrooms across the nation, the WNBA locker room seems to have it figured out. Although every player has her own philosophy, widespread acceptance within the league has made coming out practically commonplace, effectively defusing the bombshell story that still exists for nearly every other league.

One of the biggest names in the WNBA, Washington Mystics All-Star center Stefanie Dolson, has her own simple philosophy: Just let people be themselves. Here she opens up about her perspective as an LGBT athlete and how she finally found herself in the WNBA. -- K.B.

As they say, love is love.

Someone I knew growing up always joked that I'd be gay just because I was into sports. Not wanting to be a stereotype, I blocked that possibility from my mind during college and my first year in the WNBA. It wasn't until my first WNBA offseason, when a woman came up to me at a coffee shop in Washington, D.C., and introduced herself, that I personally considered dating women. I asked myself: How did I know I didn't like something until I tried it?

Throughout the 2016 WNBA season, espnW will look back at the league's 20-year history and focus on the current stars and storylines. Check out the highlights below, and find complete coverage here:

Can Stewart transform the WNBA? On draft night, Breanna Stewart was the toast of the sports world. In a league that struggles for relevance, will she ever reach those heights again? Elizabeth Merrill »

Lost and found in Russia: Unlikely comrades Diana Taurasi and Brittney Griner play overseas for the money. As it turns out, they also simplify their lives. Kate Fagan »

My generation has become more comfortable with sexuality and being open about that. I've learned that for me, gender comes second to personality, a person's aura, if you will, or their vibe. I'm not attracted to someone's gender. I'm attracted to their energy as a being.

I don't think people necessarily need to announce their sexuality. In my current relationship, I made the decision to be publicly out by posting the cutest photo of us from a weekend we spent together. She is kissing my cheek, and it's just so obvious how happy we are. Before posting, I thought about what people might say because this photo made it clear that we're together, but then I realized that the reactions of others didn't matter to me. I wanted people who are fans and supporters to know who I really am.

I won't speak for other women in the league, as I don't know the reason some players aren't out to the public. Maybe they don't want to be seen as a stereotypical athlete, or there may be other reasons, like family or religion. I'm sure some just prefer not to talk about their personal lives. We're already in the spotlight in a way, and some people are more private. I imagine some simply don't want to become the media go-to for questions about LGBT issues.

Within our team, most people are comfortable with players freely expressing who they are. When I entered the league, I met these women and got to know them. I learned who was straight and who wasn't, it's no secret. It's just not something that is always in a press release.

Not everyone in the WNBA needs to be out, but I feel called to lead an authentic life in the open. I know who I am and I don't care if people judge me. I am 6-5, and I dye my hair purple and experiment a lot with fashion. My motto is: If they're going to stare, they might as well stare at something fun. There are a lot of girls who struggle being who they are. We need people who are out so that those girls know it's OK to be themselves, regardless of stereotypes. By being open, I give them someone to look up to, and however they identify, I can inspire them to support equality and LGBT issues.

As a society, we've come a long way from where we used to be. Over the past few years, the league itself has taken huge steps forward, and we should take a lot of pride in our leadership. My teammates have been nothing but positive since I told them about my relationship, and that's a testament to the kind of women we have in our league: mature women who accept their teammates. It's a progressive and inclusive culture that I'm proud to be a part of.

The WNBA dedicates an entire month to celebrating LGBT pride, but it goes beyond the gear we wear and the things we say. We embrace LGBT people and fans; we don't shy away from it. We have so many women in our league who are comfortable, open and appreciate people for who they are. I take pride that the WNBA is on the right side of history. There are leagues that don't touch on it at all, and that's disappointing. There are other more established leagues that get more coverage than ours, and by taking a stance on equality, they could affect a lot of change. Sports have a special power to do that.

We're not as far along as we could be, where everyone is comfortable talking about LGBT issues and being open about their sexuality. I think it will require more people being out and sponsors and leagues supporting that movement in a meaningful way to take a bigger step forward.

Everyone is different, even within the LGBT community. As someone who is more fluid, there are times when I feel like I don't belong anywhere. I don't necessarily identify with a label, so it can be difficult sometimes feeling like I don't fit neatly in a specific place. At the same time, though, that's been my whole life. I've never really fit into a specific spot.