Seimone Augustus talks about what she has improved on this season, good advice she got to improve and what her arm tattoos represent.

MINNEAPOLIS -- Go back to April 2006 in Boston. Seimone Augustus' college career has ended. For the third year in a row, she and LSU have lost in the NCAA semifinals. Augustus would leave Beantown with her second Wade Trophy but no team title.

In that last game, against Duke, Augustus had taken just two shots in the first half and missed both. She finished with 14 points on 6-of-18 shooting. Then she claimed she really hadn't been frustrated by that because all that mattered was winning, not how many points she had. Except

LSU pretty much couldn't win without a significant amount of scoring from Augustus. But that's a heavy weight to always bear: to know that you must play to a certain standard for your team to succeed. That it doesn't happen without you. That you're Diana Ross, not one of the other Supremes.

Now come forward to October 2011 in Minneapolis. Augustus is 27 and a six-season veteran of the WNBA. She has an Olympic gold medal, won in 2008. She has had an MVP-caliber year in 2011, and her team is in the WNBA Finals for the first time.

In the opening half of Game 1 on Sunday versus Atlanta, Augustus scored nine points on 4-of-10 shooting. Not that bad. But she was very perturbed.

"She was so mad at herself at halftime," Lynx coach Cheryl Reeve said after Augustus finished with 22 points, 7 assists and 4 rebounds in Minnesota's 88-74 victory. "I didn't have to say a word to her. I knew we were going to be OK.

"I know there were questions before about Seimone's ability to do what it takes to win big games. I think she's got a great deal of belief in herself now, and I'm happy for her. Before I came here, I heard a lot about Seimone -- all the things I supposedly would not be able to do with her. Together, I know we're really proud of how things have turned out for her."

Even if you're not so thrilled by tattoos, you almost can't help but be captivated by what covers Augustus' right arm. There is nothing confrontational or self-congratulatory about this body artwork. The ink on her skin speaks of an appreciation of life's beauty that's at her core, her way of wearing her heart on her "sleeve."

"I actually just let the artist free-style," Augustus said. "I have my mom's name in it. I wanted a feminine-type sleeve with flowers and water, meaning peace and tranquility. Things that mean something to me.

"It's laid-back, but at the same time unique and vibrant. It's me. I don't really get to show that other side of myself much because I'm usually so closed in trying to get to know people."

Augustus describes herself as someone who doesn't have "a whole lot of friends," yet you'd be hard-pressed to find anybody who dislikes her.

"I'm not a person who is very social," she said. "But [playing] overseas kind of forces you to be that way. Because you have to find your way around. It's helped me be more open with people I don't know as well."

Stretching beyond her comfort zone was a post-collegiate experience for Augustus. The native of Baton Rouge, La., could have gone anywhere to play, but she stuck with the familiar.

"At LSU, you have to say I was sheltered," she said. "I was still at home, with my parents 10 minutes away. Once you hit the WNBA and start to play internationally, you begin to build character because you experience a lot of life situations that better you as a human being. I had to grow up."

There are easier places to do that than as the top draft pick of a perennially struggling franchise that tended to over-rely on her skills. Three days after Augustus' college career was over, the Lynx did as expected and selected her at No. 1.

She immediately fit in at the WNBA level, averaging 21.3 points over her first three seasons. That she could be a powerful offensive force at this level was proven. What wasn't so certain was whether it would make any difference for the success-challenged Lynx, who were 36-66 in that span.

Then, just six games into the 2009 season, Augustus was hurt in a game against Phoenix. It was a torn ACL in her left knee, followed by rehab months that contained more doubt and fear than Augustus had ever experienced.

"There were days when you really didn't see any kind of production," Augustus said. "You might have gained 2 or 3 inches of flexion, and then none the next day. That's a very trying time.

"Then getting back to the court being 20 pounds overweight and not playing like myself. That mentally will tear you down, and you can get really distraught. That's what I went through."

In the spring of 2010, she had surgery to take out three large fibroids and her uterus. At the time, there was a fear factor with that, too, although Augustus now says, "Once they did that surgery, it was over and done with. But the ACL -- the whole recovery and having to push yourself through those times was hard."

It is not in Augustus' nature to succumb to emotion. Instead, she generally has tried to fight to remain stoic, even in the worst times. Maybe especially then.

"It was very difficult to lose Coach Gunter and have to go through that. It was a very tough time," she said of Sue Gunter's death in August 2005, when Augustus was starting her senior season at LSU. 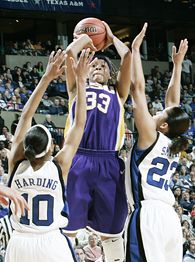 "And not winning a championship -- every year, you're favored to win, and we never won. Getting here and losing for five years and going through these hard times. It was bottled-up emotion, and I guess I used it as motivation to continue to build myself.

"There definitely was a moment when I should have broken down and had this whole crying thing and tissues everywhere. But I never had that. That's why I say if we are the champions, I will cry."

There are still crucial games to play to get there, and Augustus knows Atlanta will not go easily. The Dream had the Lynx down by as many as 12 points in Sunday's opening game, and it took Minnesota's collaborative effort to rally for a victory.

That fact, though -- that the Lynx have multiple threats all capable of carrying some of the load -- has made this season the most satisfying for Augustus. Her scoring average -- 16.2 -- was the lowest of any year she has been in the WNBA, yet she was regarded as a strong MVP candidate.

Before with the Lynx, she too often felt that the team's fate rested entirely on her shoulders. Now that she knows it doesn't, she has gotten even stronger. She is more comfortable than ever with accepting just how much she means every game to her team.

"Is it a hard place for a player to get to? Well, it's challenging to do it every night," Reeve said. "To have the responsibility, the consistency. That's where we probably have stayed on her the most. Even last year, it would be like she'd do it for a few games and then not do it. So we really worked on that."

And rather than be threatened in any way about having another No. 1 pick and multiple Wade Trophy winner joining the Lynx this year, Augustus was excited and motivated to do anything she could to help the rookie.

"She had certain people who told her maybe it was her time to move away from Minnesota because Maya Moore was coming," Reeve said. "And she was irritated by that notion. Her response to me was, 'Why would I leave now? These will be the best years of the Minnesota Lynx.' She's very smart."

Augustus also was wise enough to listen when one of her overseas and USA Basketball teammates, Indiana's Tamika Catchings, told her that she could be an "unstoppable" player if she fully committed herself on both ends of the court.

"We guarded each other every day in practice," Augustus said of being on the Galatasaray team in Turkey with Catchings. "She would stop me when I made mistakes. She'd say, 'Move your feet this way' or 'You can use your length better' -- and that even when you think you are out of a play, you're still in it.

"The tricks of the trade she gave me helped me evolve as a defender. When I got back here, with Coach Reeve being a defensive-minded coach, she refreshed me on help-side and being able to close out effectively."

Atlanta's Lindsey Harding was a starter on the 2006 Duke team that defeated LSU in Augustus' last college game. Harding also was a No. 1 draft pick, in 2007, and has gone through an ACL injury as a pro. She sees Augustus as being better than ever now.

"She's always had that step-back jump shot, and now she's perfected it," Harding said. "She wants to win; you can see it in her eyes and in how she plays. Her coming back from the injury made her stronger. I know it did that for me, too, when I came back from mine. It helped her."

Fellow Dream guard Armintie Price, who went head-to-head against Augustus in the SEC while at Mississippi, said the Lynx star wears out defenders because she's always trying to make something happen.

"Every time she touches the ball, she's looking to make a play," Price said. "She knows now that she's that great player who can score anytime. So, as a defender, my job is to not let her touch it. A couple of times [Sunday], I did, and she got into a rhythm. Once she does that, it's hard to get her out of it."

At home here, too

The prevailing emotion for LSU and its fans a decade ago when Augustus committed to stay home to play collegiately was a mix of elation and relief. She did wonders for the program, which went to its first Women's Final Four -- LSU would end up making five in a row -- led by Augustus.

It seems unfair to put very much focus on the one thing she did not do at LSU: win the ultimate team prize. Yet Augustus can talk about that now and see where it built her resolve and help her become who she is.

"My peak? I think I'm getting there. I haven't hit it yet," she said. "I feel like I'm just now coming out of my shell after being here for six seasons."

The Mississippi River travels some 2,300 miles from Minnesota to Louisiana. Minneapolis is near its beginning, Baton Rouge near its end. Augustus traveled the opposite direction of the river -- south to north -- to go from college star to WNBA Rookie of the Year to being the face of a franchise that, this season, has come fully alive with possibility at last.

"I feel like I'm back home the way they have accepted me here [in Minnesota]," Augustus said of the thunderous ovations she gets at Target Center. "They've been going through the struggles with me. I guess that's why they embraced me even more -- the fact that we fought through this thing together."

Mechelle Voepel, a regular contributor to ESPN.com, can be reached at mvoepel123@yahoo.com. Read her blog at mechellevoepelblog.com.