Three-time WNBA All-Star Elena Della Donna has faced her share of body challenges -- from being teased for her height as a kid to her ongoing battle with Lyme disease. For this summer's Body Issue, she talked to ESPN's Morty Ain about how she's coped and what serves as her inspiration. 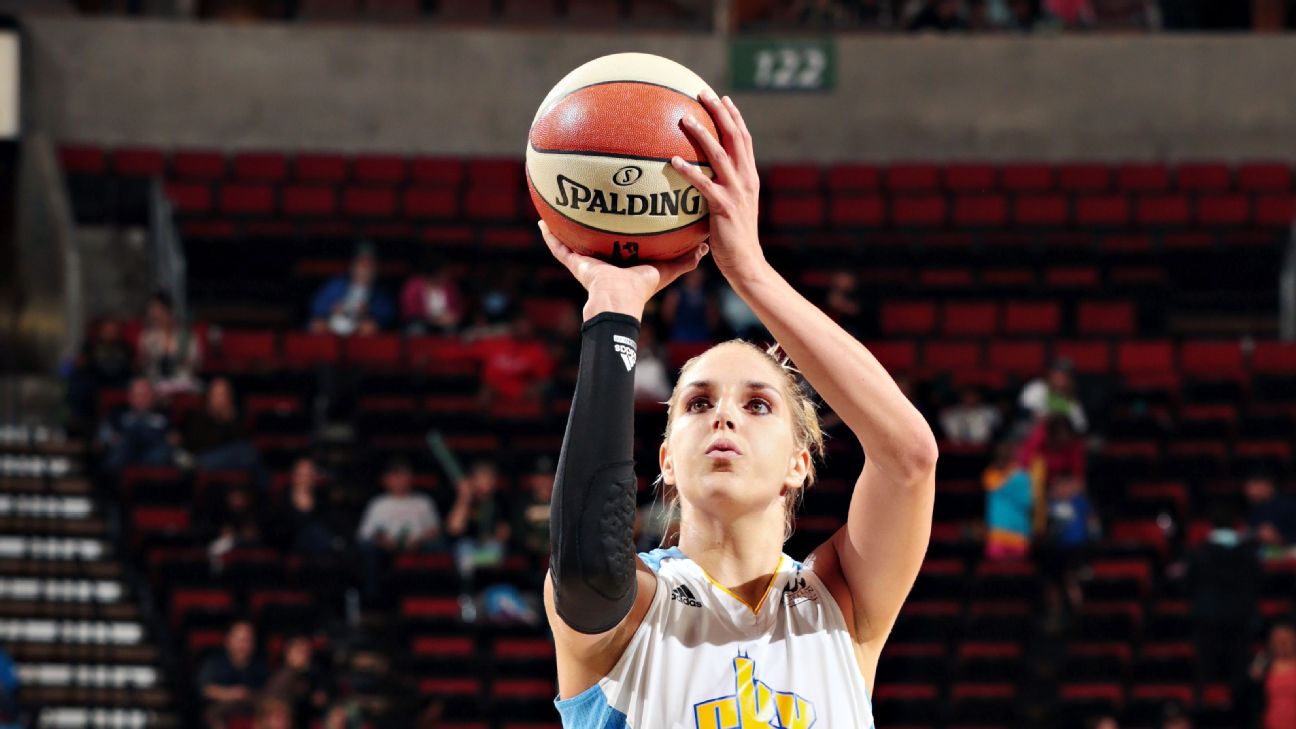 We play an amazing caliber and brand of basketball, and people try to cut that down because they are just comparing it to the men's game. "Oh well, she didn't dunk in that game!" "Whatever, they're just girls, nobody wants to watch that." That's pretty frustrating. We are the most elite players in the world. This is my life, and it's what I've put in 22 years of my life doing.

I support lowering the rim. When you think about it, there probably isn't a guy in the NBA who can't dunk, so it should be the same way for the females. If we lowered it to 9 feet, maybe even lower, we can have our point guards getting up there and dunking the ball. I think that would make our game extremely fun to watch.

I have a pack of game gum. I go to the store and stare at the gum until I pick out the right one -- somehow one will pop out to me. Once I buy it, no one is allowed to touch the packet or it's ruined. I'll take a piece and chew it in the first half, and if things aren't going well and we aren't playing well, I have to change the piece of gum. Because obviously it's the gum's fault; it's not our fault that we're playing bad [laughs]! 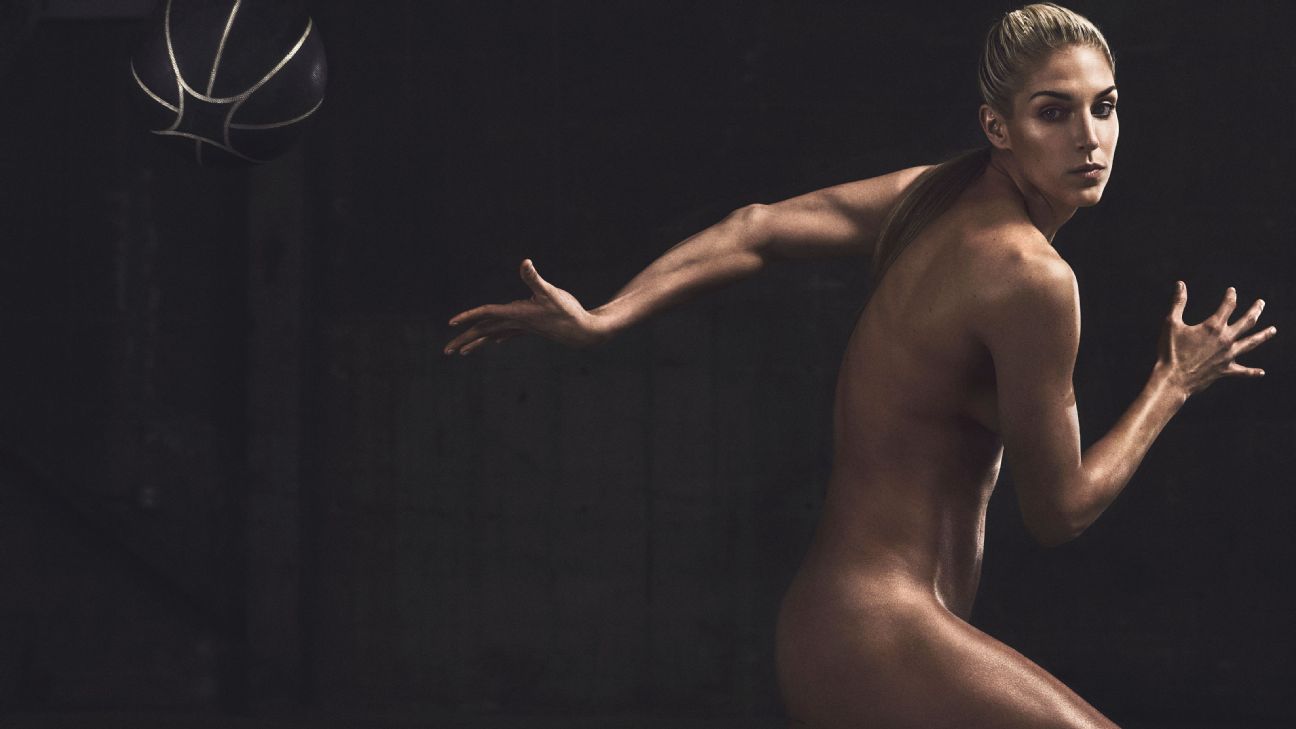 To go behind the scenes at Elena Delle Donne's Body Issue shoot, check out the full gallery of her photos. More »

My biggest challenge is trying to stay healthy with Lyme disease. At my worst, I have muscle aches and fatigue and various symptoms, like you get when you have the flu. Then there are days I'll wake up a little bit tired or my muscles aren't recovering as well, but I keep that in mind and will alter my training. I also have to eat really well and stay away from foods that will make my inflammatory system go crazy.

I take around 50 supplements a day to battle it. I think it's always surprising to people that I have a chronic illness and I play a professional sport.

It took the doctors two months to figure out what was going on with me. I had my first relapse my sophomore year in college. A lot of tests can't detect it, especially when it's gone chronic and reappears. I was sleeping probably 18 hours a day, not eating much, and I lost probably about 35 pounds. I had literally told my parents, "I think I'm dying."

I said I wanted to be the best female basketball player in the world when I was 4. I've always had really lofty goals.

I've worked with the same personal trainer since second grade. My brother, who was three years ahead of me in school, played basketball, and I always would tag along to his workouts or games. He was doing a workout one time and I just asked, "Hey, can I hop in?" The trainer was in shock. But he let me continue to work with my brother and come along. I still work with him today. He's like family now.

My entire day revolves around stressing my body, putting it through rigorous workouts and then giving back to it. It can be up to four and a half hours a day. This sport takes so many years and hours of training.

When I first got to the WNBA, I felt like throughout a game I was losing my endurance. I wasn't performing nearly as well in the third and fourth quarter as I was in the first half. So I got a new strength coach back in Delaware, and we really worked on core stability and endurance, doing circuit training. People wrote that I put on 12 pounds of muscle. That might have been a bit of an exaggeration. But I definitely put on muscle and lost body fat.

I used to tell my mom all the time that I wished I were shorter. She's 6-2 and my dad is 6-6, so she understood. She was like, "I'm telling you, one day you are going to realize how beautiful your height is." She would always tell me how unique I am and say, "Why try to be like the rest of the pack? Be your own person."

It used to be annoying when kids would make fun of me for my height. It's funny because height is an attribute where people feel like they can call it out. Like, if I'm at a grocery store, someone will be like, "You're so tall!" Kids would be like, "Oh my god, you're taller than my dad." "Oh, you look like a monster!" "I don't look like a monster, I'm just tall." Those would be hurtful things that kids would say, but I don't think kids even understand that that comes off as rude.

My dog's huge. He's a Great Dane, so I knew he was going to be huge, and it's something that I absolutely adore. When he stands up on his hind legs, he is my height. And when he's on four legs, his head comes up to a little above my hip. He also thinks he's a lapdog, which is comical at times.

"I think it's always surprising to people that I have a chronic illness and I play a professional sport." Elena Delle Donne

His name is Wrigley. I got him my first year in Chicago for my rookie season, so I figured a Chicago name would work well. But when I would take him to the dog beach in Chicago, everyone else had a dog named Wrigley too.

When I'm practicing on the court, I always try to play mind games with myself. I'll tell myself, "I'm going to miss this shot," and then I force myself to push through that. Or I'll say, "There's no way you're going to make 11 in a row." Then I have to try to challenge myself to do it. When I'm on the court, everything is positive. I tell myself, "It's going in." So if I can train the opposite way, I'll be even more prepared when it's game time.

In high school, I made 81 free throws in a row. I remember when I missed, it was kind of like, "Thank god this is over!" Literally everybody in the gym was holding their breath every time I shot a free throw. I was just so relieved for it to finally be over.

My sister, Lizzie, has always been my biggest inspiration, even though she's never spoken a word to me. She's deaf and blind, and she has intellectual disabilities as well. She's probably functioning at the level of a 1- to 2-year-old. Not only that, but she's had over 30 surgeries in her life. She's overcome every single thing that's been thrown her way. So many times doctors said she wouldn't be able to walk, or she wouldn't live to this age, and she's surpassed all of those expectations. She's just amazing.

On my 20th birthday, I got a tattoo of my sister's name inside of angel wings. I wanted to put it somewhere it's not seen every day, but I know it's there. And before every game I pat it, or if I need to channel my sister in any way throughout a game, I'll pat my side.

Anything I endure in a day will never be able to compete with what she has to endure each day of her life.