Ashleigh Newman knows how to make a recipe work. The Maryland junior is rumored to be quite the cook, capable of whipping up a mean plate of chicken for hungry teammates. And so she knows better than most that even the most luxurious ingredients can end up disappointing diners if combined without basic essentials like salt and pepper. 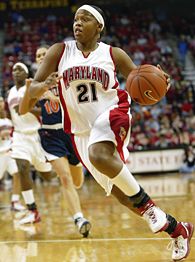 There will be plenty of gourmet talent served up when No. 3 Maryland hosts second-ranked North Carolina on Sunday (ESPN2, 7 p.m. ET). Between North Carolina's Ivory Latta and Erlana Larkins and Maryland's cavalcade of stars, the game might wind up being standing room only for both Maryland students and WNBA coaches. But All-Americans aside, neither team is likely to make it to the Final Four in Cleveland without getting significant contributions from the bench.

Look around the country at the quality of depth on top-10 teams, and it's clear that reserves who play like starters but act like role players are almost a prerequisite for success.

And for the Terrapins, that puts the spotlight squarely on Newman and fellow junior Jade Perry.

But Brenda Frese's rotation doesn't stop when name recognition begins to run out.

Eight Maryland players currently average at least 19 minutes a game, with no player averaging more than 27 minutes. Duke has just five players averaging even 18 minutes a game. North Carolina, Tennessee and Connecticut all have just six. Even taking into account that Maryland's numbers are slightly skewed by Wiley-Gatewood's late addition and a nonconference schedule that produced more blowouts against unranked opponents, no team in the top five has a rotation quite as balanced as the Terrapins.

Newman and Perry aren't offensive afterthoughts, but it's their other contributions that have Frese pushing, pulling and stretching time in ways that would make a cosmologist wince in an effort to get everyone on the court.

Perry's minutes are right in line with what she averaged during each of her first two seasons at Maryland, but that's about the only thing that hasn't changed for her. The rededicated junior, who battled off-court distractions last season while helping her sister recover from a military-training accident that eventually required amputation of a leg, is averaging a career-best 6.5 rebounds per game, good for third on the team behind Langhorne (7.7) and Coleman (6.7).

"I think that's something new I've added to my game," Perry said. "Just rebounding more, getting in position to rebound.  If someone gets the rebound over me, it really does bother me."

With three solid rebounding post players (Harper checks in at 6.0 per game) and good rebounding guards in Coleman, Doron (4.4) and Newman (4.1), the Terrapins average a staggering 17 more rebounds per game than their opponents. Such is their dominance that they are actually within shouting distance of having as many offensive rebounds (316) as their opponents have defensive rebounds (399).

But they aren't taking control of the glass for granted against North Carolina, one of the nation's biggest teams and a team that averages 15 more rebounds than its opponents.

"The main thing that we've focused on, and it's been that way for the past two years that I've been here, is just their rebounding," Newman said. "We look and they have the rebounding edge over people in pretty much every game. And we've known that from when we play them; they crash the boards extremely well."

Added Perry, "That's going to be our key to success -- just blocking out, rebounding and running the floor hard."

Stopping a front line of Larkins, Camille Little, LaToya Pringle and Jessica Breland is daunting enough, but you can't talk about the Tar Heels without talking about player-of-the-year candidate Ivory Latta on the perimeter.

Latta has struggled offensively in North Carolina's two biggest games this season, scoring 12 points against Tennessee and 14 points against Connecticut without hitting half her shots in either contest. But she also hit the winning 3-pointer against the Huskies and didn't need to be brilliant in a 13-point win against the Lady Vols.

The good news for Maryland is that in three games against the Terrapins last season, Latta shot just 37 percent from the floor. And Newman, who Frese labeled the team's "best perimeter defensive stopper" before this season, had a hand in that success.

"She never gives up," Perry said of her teammate. "She is like a spark of energy. She's always there to play good defense, and she's just a tremendous hustler."

"I think it comes down to just digging deep and finding it within yourself," Newman said of stopping players capable of scoring both off the dribble and on jump shots. "I think it takes a lot of heart and pride just to dig and say this person is not going to do this against me."

That didn't happen for Newman or the rest of Maryland's guards against Duke two weeks ago, when Lindsey Harding decimated Frese's man-to-man defense for 28 points in a 19-point win.

With nearly a week off before their next game and with the experience of last season's championship reminding them that one loss in January wouldn't sink a season, the Terrapins took what they could from the debacle in Durham.

"I think that game really helped us," Newman said. "I think that was a loss that really showed this team what we need to work on. The things -- you know, they exposed us in every area of the game -- that we needed to focus on. And that's what we were able to do the following week is just get back in the gym and work on a few of those things."

Maryland will be back in that gym on Sunday, this time in front of a national television audience and what promises to be the latest in a series of frenzied crowds that have stretched from Hartford to Knoxville and Chapel Hill this month. And chances are Perry and Newman will play a big role in helping determine whether the result tastes bitter or sweet.

"If I said it was the same as any other game, I'd be lying," Perry said.