WORCESTER, Mass. -- The Hart Center at Holy Cross is quite literally the end of the road, marking the southern terminus of a campus that sits high on a hill overlooking the somnolent industrial town of Worcester. 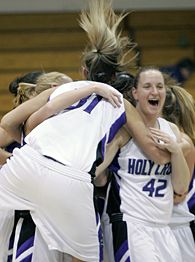 On Wednesday night, the small gym still half-filled with wooden bleachers and framed by a white cement institutional wall was the end of the line in another sense, as Holy Cross and American University battled for a distinction as inevitable as it is unofficial.

"Are you ready to go to Raleigh?"

So began a conversation on the court an hour or so before the game. The two people involved happened to have ties to Holy Cross, but it was a sentiment surely shared by the players, coaches and handful of fans of the visitors from Washington, D.C.

One of the host sites for the first and second rounds of the NCAA Tournament, Raleigh, N.C., is the expected destination for projected No. 1 overall seed Duke. As such, it's also the expected destination for the No. 16 seed generally assumed to have the weakest profile in the field. And with both Holy Cross and American sporting losing records entering the final of a Patriot League tournament marked by upsets that knocked top seeds Bucknell and Army out in the opening round, it was clear what awaited the winner in a week and a half.

So, fresh off rallying from a 10-point halftime deficit behind the shooting of an unflappable rookie to win 56-48, here's this year's ultimate long shot.

"They could send us to Alaska -- or wherever, Siberia -- and I wouldn't care," coach Bill Gibbons said after the win. "We're in the Big Dance, and now the pressure is off and we can go have some fun."

Gibbons' program is actually something of a hustler in filling Cinderella's dancing shoes, having been to the NCAA Tournament eight times in the past 12 years (the Crusaders have won 11 Patriot League titles). The Crusaders even have a March Madness win on their résumé, having upset sixth-seeded Maryland in 1991. And only once in that span, all the way back in 1995, was Holy Cross seeded 16th in a region.

But for the first few months of this season, the current edition appeared to have little in common with the program's illustrious past. Holy Cross opened the season 5-6 and proceeded to drop seven of its next eight games, including a 1-4 start in conference play, after injuries ravaged the backcourt.

A roster already heavy with seven freshmen and sophomores, including freshman starters Bethany O'Dell and Briana McFadden, suffered the most serious blow when junior point guard Laura Aloisi, averaging better than six assists per game, went down with a season-ending knee injury just two games after reserve point guard Jessica Pearson was lost for the season with a knee injury of her own.

Besieged by questions about how a coach used to such a high level of success was dealing with the adversity, Gibbons offered a simple recipe for bouncing back.

Like so many low-major programs with a history of success, Holy Cross has a foundation of continuity at the top. A Worcester native who graduated from nearby Clark in 1981 and got the job at Holy Cross not long after, Gibbons speaks with a thick Massachusetts brogue and the energy of someone with far fewer than 22 seasons on the bench. He's a man for whom Holy Cross was never a steppingstone job.

"The type of program we have here -- it's not rhetoric that it's a family and it's place that I thank God every night that I'm coaching at," Gibbons said. "It's the best job in the country, because of the type of kids I get and the type of assistants I've been able to attract."

Nearly an hour and a half after the game -- with the gym deserted and Gibbons making his way out the door after stopping to shake every hand and answer every request -- senior Kaitlin Foley, the team's leading scorer and an all-conference pick, approached her coach. As they shared one last embrace, he congratulated her for never giving up. The Crusaders aren't going to roll over and play dead against Duke or any other team, but the moment underscored exactly what each team in the field announced Monday already has accomplished.

And it's an accomplishment that isn't lost on the players.

"We need to just take a deep breath, let it be real," Foley said. "Even on our bus ride home from the airport [after the semifinals] the other day, we were just riding high. Winning is just such a great feeling. But we have to look back, we've been through a lot this year. And I don't think anyone thought we would be in the Hart Center cutting down our own nets, and we did it."

Gibbons was in complete agreement.

And who knows what could happen in a tournament in which a No. 16 seed has beaten a No. 1 seed.

"Whoever we play first round better watch out," Foley joked after the game.

Or maybe she wasn't joking.

Alison Bales wasn't looming in the lane on Wednesday night, and Abby Waner wasn't spotting up on the wing. Instead, Foley controlled the lane with 15 rebounds and tournament MVP O'Dell fired clutch 3-pointer after clutch 3-pointer on her way to 20 points.