BATON ROUGE, La. -- Bob Starkey is sitting next to a television in his second-floor office, focusing for now on this one simple task. A week ago, he'd been a lifelong assistant coach, helping take LSU to three Final Fours. Just two years ago, he was building his dream house.

"A lot of things have happened in 72 hours," Starkey says.

Nothing is familiar. Pokey Chatman's office next door is empty and dark. The door is shut. He's the interim head coach and has to figure out what to tell a dozen heartbroken and confused players. Kids, he calls them, with a West Virginia earnestness big-time athletics never beat out of him. Bob Starkey's always been a throwback.

In front of him plays the movie "Apollo 13." He's looking for a clip to show the team next time they meet. It'll be his message. On the screen, one NASA official turns to another and says, "This could be the worst disaster NASA's ever faced." The man replies, "With all due respect, sir, I believe this is gonna be our finest hour."

That's the theme. His next handout for the Tigers begins with the words: Today is the most important day of my life. He wants the players to find calm in the midst of a circus, not to focus on the tawdry details of yesterday.

It won't be easy. 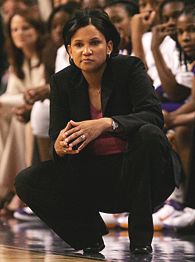 Baton Rouge is going wild with speculation, and in the absence of comment from Chatman, the vacuum has been filled with theories, each more lurid than the one before. A week ago, people were talking about the team's NCAA chances. Now they're whispering about rumored love triangles. The town, whose obsession with spicy food and football is eclipsed only by its fixation with scandal, cannot help itself.

It's all anyone can talk about, with athletic department employees badgered in local grocery stores and restaurants. Local defense attorneys spent a cocktail party a few nights ago making the rounds, finding out if a new coach had been hired. The gossip mill said everyone from coaches to players were lawyering up. Other athletes are as fascinated as the fans.

Most of the rumors simply cannot be printed. What we do know, according to LSU athletic department sources, is Chatman had an alleged sexual relationship with a former player. Late this season, assistant coach Carla Berry, who has known Chatman for years, made the university aware of the relationship. After determining that no current players were involved, the university involved the athletic department. Lawyers for both sides crafted statements, all too cryptic, and the firestorm began.

There were two emotional meetings with the entire team and Chatman. The first time, the players cried. The second time, with reality sinking in, she did. In between, the assistants called the parents of everyone, including new signees. They raced the clock, knowing what time the now infamous statement would be released Wednesday. On Saturday night, Starkey had the team over to his house for dinner.

"Everything that I do and think about is trying to do this as well as we can for those kids," he says. "They absolutely deserve that. I'm not thinking about my next job. This needs to be the most exciting time of year for them."

A few LSU athletic department officials privately voice hope that the team loses in the first round and comes home. That way, they can start to put this mess behind them. Meanwhile, a once bright season continues to list, and, no matter how many games the resilient Tigers win in the coming weeks, this story only has losers.

There are the players, who had their world come crashing down just before the biggest month of the year. 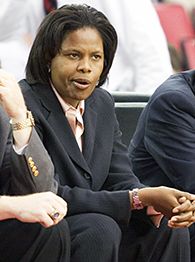 There's Berry, who played and coached at LSU. She felt compelled to blow the whistle on her friend. Disloyalty, no matter the reason, is a scarlet letter in college coaching circles. If Berry were to leave LSU, which is likely with a new head coach coming in, she could find it tough getting another job.

There's Starkey, who first arrived at LSU as an assistant for former men's coach Dale Brown. He coached Shaquille O'Neal, Chris Jackson and Seimone Augustus, and this is likely the end of his time in Baton Rouge. He's canceled the newspaper and the cable in two rooms of his home. His wife canceled her YMCA membership. They're starting to save money. They might have to leave that dream home they built. "My wife really worked hard on the details of the house," Starkey says.

There's LSU. With its hands tied by attorneys and human resources officials, the university was forced to put out a statement bound to place the school in the line of fire. Athletic director Skip Bertman's public comments -- "The girl [Chatman] did what she did and LSU had no control over that" -- to the New Orleans Times-Picayune only exacerbated the situation; Bertman's never been known for displaying tact during times of scandal.

There's the program lovingly nurtured by the late Sue Gunter. Once behind football, men's basketball, baseball, gymnastics and track in the pecking order, women's hoops has become a local phenomenon. With Chatman at the helm, the legacy of Gunter lived on. Now that's in jeopardy, and many in Baton Rouge are wondering how heartbroken Sue would be over this.

"I think about that a lot," Starkey says.

And finally, there's Chatman, who spent her entire adult life at LSU. A short drive from campus is her house. Like her office, it is empty and dark, just another skeleton of a brilliant future thrown away. Fans have been leaving notes of support tucked inside her door handle.

The morning paper sits in the drive, filled with details of her career's demise. It hasn't been read. No one knows where Chatman is, and she hasn't come forward to explain. Until then, the Baton Rouge rumor mill will continue to go wild, leaving no winners, only losers.