Maryland's Laura Harper had some advice for fellow post player Crystal Langhorne after practice Friday, and she was only half-joking. 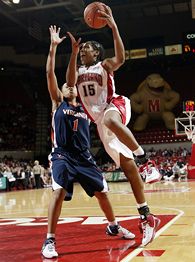 "I told Lang that we needed to go to sleep now to be ready for it," Harper said of Sunday night's showdown between No. 2 North Carolina and No. 3 Maryland (ESPN2, 7 ET). "That's the most physical game, facing Carolina. After we played them in the Final Four, Lang and me were the only two who didn't do anything the next day. We were worn out. It takes such a toll on your body."

Maryland's 81-70 national semifinal victory over the Tar Heels in Boston last season indeed looked like a human demolition derby. Considering the mind-boggling amount of sheer athletic ability that was on the floor that night and will be again Sunday, it's no surprise that Harper sounds as if she's prepping to go 15 rounds of heavyweight boxing.

She owns a national-championship ring, and she has a lot of respect for North Carolina, one of the toughest foes the Terps had to go through to get their title. She calls Tar Heels junior Erlana Larkins "the hardest player I've ever had to box out." In the teams' three meetings last season, Larkins averaged 23.7 points and 10.3 rebounds.

This year, Larkins leads the Tar Heels on the boards with 9.6 per game; teammates LaToya Pringle and Camille Little average 7.6 and 6.4 rebounds, respectively. Rashanda McCants (4.4 rpg) can be a handful of trouble, too.

"Erlana never stops moving, and she's so strong," Harper said. "They never stop working on the boards. Camille can come in from the free-throw line and grab rebounds. Pringle is all over the place."

Harper thinks the key to beating North Carolina is rebounding. When Maryland won in overtime last year in Chapel Hill, the Terps edged the Heels on the boards 49-48. Then Carolina took their matchup in the ACC tournament title game, prevailing 48-37 in rebounds.

In the contest that mattered the most, at the Final Four, the Terps had a 41-31 edge on the boards. Marissa Coleman led the way for Maryland with 14 there.

The 6-foot-4 Harper and 6-2 Langhorne tease 6-1 Coleman that she's just the beneficiary of their prestigious blocking out.

"We call her a little bird sometimes, because she swoops in there and cleans up," Harper said, laughing. "She uses her athleticism and length. But we like to say we do the dirty work, and then she's pretty on the rebounds."

The other crucial aspect for Maryland on Sunday -- along with rebounding -- will be transition defense. The Terps' only loss this season was Jan. 13 at Duke, 81-62. In that game, the Blue Devils had 16 fast-break points to Maryland's four, although it "felt" even worse than that.

Harper said the Terps at first were despondent in their locker room afterward. Then everyone started remembering it was only January. And that last season, the Blue Devils' regular-season success against Maryland didn't mean much compared to who won the NCAA title game.

"It was humbling, but it exploited our weaknesses, and showed us what we had to work harder at improving," Harper said of the loss at packed Cameron Indoor Stadium. "Losing in that type of fashion hurt. But if we were on top of the world the whole season, maybe we wouldn't be as good as we need to be going into the NCAA Tournament.

"We had really good practices after that game. We knew coming into this year that to become a better team, we have to take care of the ball and get better defensively. I know for a fact that we've gotten better on transition defense since the Duke loss. But it's still going to be a work in progress as the season goes on."

She had 24 points and nine rebounds against North Carolina, then 16 and seven against Duke. What made that especially nice to see was that Harper's freshman season had been cut short in late December 2004 by a ruptured Achilles' tendon.

The timing couldn't have been any crueler: She'd played nine games, which isn't much but still more than the 20 percent allowed to get a medical redshirt.

"To go from that disappointment to winning it all in one short year -- you couldn't ask for a better story," Harper said. "As down and depressed as I was my freshman year, it's been an amazing feeling with everything that's happened since."

And Sunday, with the Terps' Comcast Center sold out, that feeling will continue.

"Oh my gosh, we're thrilled," Harper said. "As soon as the clock struck zero (Thursday in Maryland's win at Clemson) we said, 'We've got to get better, we've only got two days to get ready for Carolina.'

"It feels like a Final Four game, really. It's going to be fun. This is what we came to college to do, to play in games like this. And after Duke  we feel like we fell down in that game. Like everybody was thinking, 'What's up with this Maryland team?' We have another chance now to show who we are."