OKLAHOMA CITY -- We were sitting on press row at the Big 12 tournament, watching Iowa State's Lyndsey Medders throw a whole rack of knives at Nebraska, when I got a message that coach Pokey Chatman had resigned at LSU. 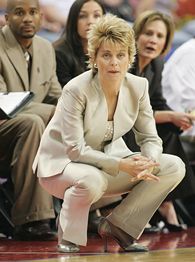 This became the huge buzz, of course, here at the Big 12 championship -- and not just because it seemed so weird and there was instantly so much speculation about what's going on with Chatman. But also because Baylor's Kim Mulkey is hot coaching property. And her home state is Louisiana, where she starred for Louisiana Tech as a point guard and then was an assistant coach.

This LSU news bombshell really helped liven up what was otherwise a ho-hum day in the Big 12 quarterfinals, save a truly entertaining game between the Cyclones and Huskers in which Medders scored 27 points. She forced overtime with a 3-pointer with one second remaining, shooting off the dribble while all her momentum was going left. If I had to testify as to why basketball is the best, most exciting, most wonderful sport in the universe, I'd just show a video clip of that shot.

However, I would not include any footage from the Texas A&M-Colorado water torture that began the day. The Aggies' defense made the Buffs' attempt to run their offense look as difficult as escaping Alcatraz. (When it was actually a prison, not a tourist trap.)

And I'm not sure why this was allowed to happen, but the Aggies were wearing home gray instead of white, and the Buffs were wearing their road gold. So there was virtually no contrast between the uniforms. Perhaps that excuse could help explain Colorado's 26 turnovers -- except for the fact that all season, the Buffs have been throwing the ball away like it smells bad.

Anyway, then in the two night games, Oklahoma defeated Texas, and Baylor took a crowbar to Kansas, which had pulled the only first-day upset by knocking off Oklahoma State. Neither of Wednesday's evening games was compelling, and we reporters were most interested in asking Mulkey a lot of questions about LSU that we knew she wouldn't really answer very directly, but still

(Of course, we'd also been yakking about her satiny, silvery, sparkly shirt outfit, which seemed a bit too high-rent for only the quarterfinals. It really ups the fashion ante for the semifinal. That was already anticipated to be sky-high with the expectation that it would pit Baylor and Oklahoma, meaning another Mulkey-Sherri Coale duel. Folks absolutely live for this stuff in Big 12 land.)

Nobody wants to see Mulkey leave the conference -- she's still the only coach who has delivered an NCAA basketball title to the Jumbo Dozen on the men's or women's side since the league began -- but it makes complete sense if other programs are after her. In fact, they'd be pretty stupid if they were not interested in her.

So we asked Mulkey about LSU  and for that matter, the openings elsewhere -- such as Florida (unless Chatman has taken that job, one of many rumors on that front Wednesday), Michigan and Arkansas. I thought Mulkey might smile and just tell us all to go jump off a cliff, but she expertly walked the tightrope of saying the right things.

"I am so focused on trying to win the next ballgame, I don't have an opinion on any of those jobs," she said. "I know there'll be more jobs that come open. Anybody that has built a program, it goes without saying that any job opening, your name is going to be attached to it.

"In any business when job openings come up, there's speculation, there's things to write about. Who's connected, who lived where. It's just part of the profession."

I asked Mulkey if she was surprised by the three openings in the same season in the powerful SEC.

What about the idea of "going home" to the state of Louisiana?

"I just don't even think making a comment about any of the job openings is appropriate," Mulkey said. "Baylor treats me great. We are a top-25 team. I get paid great at Baylor. [LSU] is nothing more than another job that is open."

And that was it on the job front -- for now. Then Mulkey jokingly asked us, "Y'all want to come pick out my wardrobe tomorrow?"