Title IX reads quickly, just 37 words. Explaining it, though, has always taken a lot more words than that. I've written many stories about Title IX, and none of them has ever been short. 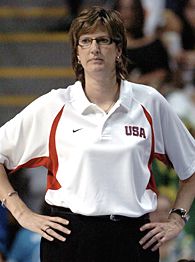 Each time, I end up referencing at least some of these things: the three-prong test, the Office of Civil Rights, the '84 Supreme Court decision, the Civil Rights Restoration Act, the Brown decision, punitive damages, the Equity in Athletics Disclosure Act, the Commission on Opportunity in Athletics and e-mail surveys. It gets pretty complicated.

But as the landmark legislation -- a section of the Educational Amendments of 1972 -- turns 35 years old on Saturday, it occurred to me to think back to something much simpler. The time I first "learned" of Title IX -- even though, then, I had no idea that was essentially what I was hearing about.

In 1974, a teacher from my local high school and his wife visited our church. After the sermon, I was running around maniacally like all the other kids freed from sitting miserably still for an hour. Somehow, while weaving through the adults gabbing outside in the sunshine, I heard that this teacher was starting a girls' basketball team at the high school that fall.

Why would this moment have registered enough that I would remember it even after a week, let alone three decades later? I was only 9, when high school kids still seemed very adult and not something I'd ever actually be.

But it's funny how you look back on your life and see that your brain was always wired a certain way. Long before you recognize you are doing it, you catalog "landmarks" for things that will remain important to you.

And when our high school's first star girls' basketball player -- Theresa Kadlec -- emerged, her name (which I obviously never forgot) and picture began to appear in the local newspaper regularly. Which I thought was just awesome.

Now I know that Title IX contributed to all of that. What was going on in my little corner of Eastern Missouri was happening at high schools and colleges all across the country.

Congresswomen Patsy Takemoto Mink of Hawaii and Edith Green of Oregon had been Title IX's sponsors in the U.S. House of Representatives. Indiana's Birch Bayh was the legislation's chief advocate in the Senate. It was signed into law by President Richard Nixon, and it's very fair to say he did not in any way anticipate what it meant.

The NCAA -- in one of the more embarrassing mistakes in its history -- actually lobbied against Title IX, to no avail. It took a few years for schools everywhere to realize it really was law, and changes needed to be made.

There were those relatively few educational institutions that had provided athletic opportunities for girls and women even in the "Backlash Dark Ages" period of the 1950s and 1960s. But most places had little or nothing, and had to build basically from scratch. By 1974, even the most reluctant athletic officials knew it had to be done.

But it was imperative that there be people who really wanted to do it.

I'll flash forward a decade to 1984. It was January, and I was about to conduct my very first interview with a coach for a newspaper story and was quite nervous. But, hey, all my life I'd watched coaches being interviewed on TV and read their quotes in stories. I had a pretty good idea what to expect.