Maggie Dixon kept saying that this had been the most unforgettable weekend the Dixons ever had, the ultimate gathering for March's ultimate basketball family. West Point's women's coach was talking on her cell phone from a Manhattan hotel where her older brother, Jamie, was preparing his Pittsburgh Panthers for the Big East Conference championship game that night. Maggie and her folks had just finished an afternoon of shopping on Madison Avenue, and now she was going on and on about how she hoped that this was the beginning of a long journey of Dixon championship runs this time of year. 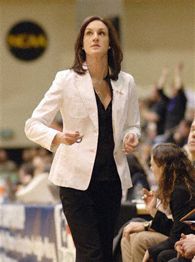 "You dream about a weekend like this, about being able to share this whole thing with your family," Maggie said. This was a weekend that began floating on the tops of shoulders at the United States Military Academy, an impromptu ride around the floor flooded with a frenzied corps of cadets. That's where it started, bobbing in the air at West Point, celebrating the first Patriot League championship and bid to the NCAA Tournament for Army women's basketball.

Maggie Dixon had been a storybook coach of the storybook season, hired from DePaul just days before the start of preseason practice, winning 20 games and making her brother and her the first siblings ever to make the NCAA Tournaments together as coaches. "This is such a great story," she said that day in the hotel suite.

And without warning -- without anything but the cruelest of fates -- the Dixon family was back together on Thursday at the Westchester Medical Center where the most vicious of nightmares was unfolding. Maggie Dixon, 28, suffered an arrhythmia heart episode on Wednesday at West Point, leaving her in critical condition in the hospital's intensive care unit.

Thursday night, she died at age 28.

Three weeks ago for Maggie Dixon, life was the Tennessee Volunteers, the NCAA Tournament and becoming the toast of the Academy. Three weeks ago, they were worried that they wouldn't be able to keep Dixon at Army long, that she was on her way to the big time. Three weeks ago, she was living one of those blessed lives, when everything in life seemed to be within her grasp.

This is the kind of story, the kind of tragedy, that leaves a pit in your stomach. Leaves you speechless. No warning. No justice.

At West Point, they never get used to young people dying young. It's part of life there, but it's still the most piercing of pains. When they announced on Thursday morning that Dixon had passed overnight, they reported, too, the death of a 2002 graduate who had died in an Apache helicopter crash in Iraq.

Perhaps they're forever bracing themselves for news of academy graduates dying overseas, but this one hit differently because no one could've seen this coming on campus with Maggie Dixon. Her basketball team had become such an escape for the Cadets at the Academy. It had become such a surprisingly special part of the winter.

In the short time that she was at West Point, the Academy became so fond of Maggie Dixon, so taken with the basketball team that came out of nowhere to meet Tennessee in the NCAA Tournament. How many coaches in the history of West Point had been afforded a standing ovation of 4,000 cadets in the dining hall? How many people had turned that most stone-sober place to such elation?

She brought magic to West Point, brought a touch and genuineness that endeared her and her team in a way that no one else in women's sports history at the Academy had done in that male-dominated environment.

In his 30 years in the business, her top assistant, Dave Magarity, a Division I men's head coach for 25 years, had never been so moved by a scene as that of witnessing the incredulity of Maggie's face when the cadets picked her up and paraded her on the court after the Patriot League championship game in March. West Point finished 20-11, the best basketball season at West Point since Bob Knight was coaching there more than 30 years ago.

Dixon showed up at DePaul without a job, without a coaching résumé in 2000. She had been cut from the WNBA, worked some camps in Southern California, but she had nothing to show Blue Demons coach Doug Bruno. Nothing to show him except her intoxicating smile, her engaging disposition, her hunger to be a coach. He would take a chance on her and never regret it.

She would move up from director of basketball operations to assistant coach to recruiting coordinator within three years. Dixon was on the fast track to stardom, something that West Point counted upon when it needed a new coach within weeks of the start of the 2005-06 basketball season. Everything she's ever touched in basketball had turned to gold. It happened at West Point, too.

After beating Army 102-54 in the first round of the tournament, Tennessee coach Pat Summitt said, "There is no question that they are very well-coached. I have tremendous respect and admiration for [Dixon]. Maggie has done a great job, and I know of her work at DePaul. There's coaching in her blood with her family."

I was just going back through my notes, remembering our conversation for a column on the morning of the Big East championship game. She had interrupted our chat for a moment to wish her brother well before he left for the Garden, before the whole Dixon family eventually made it down courtside behind the Pitt bench.

Yes, this had been the best weekend of the family's life, from the banks of the Hudson River at West Point all the way to Madison Square Garden. They thought it was going to be the beginning of years and years of these weekends, mother and father, brother and sister, chasing March championships into forever. Three weeks later, the Dixons were gathered again.

No warning, no justice. All of it, just so cruel.

Adrian Wojnarowski is a sports columnist for The Record (N.J.) and a regular contributor to ESPN.com. He can be reached at ESPNWoj10@aol.com. His new book, "The Miracle Of St. Anthony: A Season with Coach Bob Hurley And Basketball's Most Improbable Dynasty", is available nationwide.