SAN ANTONIO -- It came down to Seimone Augustus and Candice Wiggins, two players who might one day be playing on the same Olympic team together. 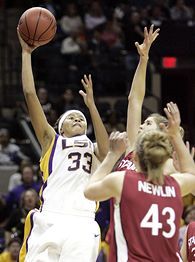 Here it was, 12 seconds left in the San Antonio Regional final, LSU up by one.

Stanford's Wiggins had just made a huge 3-pointer that cut the deficit to 60-59. Then on LSU's next possession, somehow the ball never found its way into Augustus' hands for a shot. Instead, Scholanda Hoston missed a jumper, Sylvia Fowles lost the rebound and Stanford was left to draw up a play the Cardinal hoped would send the school to its seventh Final Four.

That has been an annoying, irritating word to Stanford and its fans the past several years. Nicole Powell's 3-pointer at game's end against Tennessee two years ago in the Elite Eight almost went in  the Cardinal rallied against Michigan State last season and almost pulled off the comeback  Stanford almost knocked out No. 1 seed LSU on Monday.

But it didn't happen. Wiggins crashed into Augustus as she passed off to Krista Rappahahn in the corner for a 3. Rappahahn's shot swished  but it didn't count. Augustus had made the big defensive play of the game, taking a charge, and then followed that with two free throws that put LSU up by three.

The Cardinal never got off a last shot. Instead, it's a third consecutive Elite Eight defeat for Stanford.

Of course, it's worth pointing out that all three times, the Cardinal have fallen to a No. 1 seed -- when Stanford was a No. 6, a No. 2 and a No. 3 seed. But that doesn't make you feel much better when "almost" gets you again.

By the same token, though, "almost" has also bothered LSU. Two years ago, LSU point guard Temeka Johnson had the ball in her hands at the end of an NCAA semifinal with Tennessee. That Final Four was in New Orleans, so karma was supposed to be on LSU's side, right?

The teams were tied, it looked as if LSU would get the last shot  and Johnson dribbled into a double team. Lost the ball. Tennessee gets a layup, wins the game.

Last year, LSU appeared to be in the process of blowing away Baylor in the national semifinals, but then watched a big Bears rally end its championship hopes again.