She should've turned down the West Point job. Why take it? As the top assistant at DePaul, Maggie Dixon had everything going for her -- a hot recruiting hand, a winning program, a burgeoning family coaching pedigree. She had been duly warned. 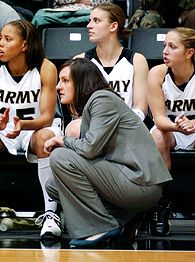 Within a week of the start of October practice?

"I can't think of a tougher first job for a young person who's never been a head coach than coming here," Army's top assistant, Dave Magarity, says.

No one gets out of there with a living, breathing coaching career. You have to go back to Mike Krzyzewski to find a basketball coach who used Army as a Division I springboard to a bigger, better job. And he left for Duke after a losing season.

Yet Dixon, who walked into DePaul's gymnasium after driving from San Diego with a friend to get her first assistant's job a few years earlier, was undeterred. She aced the Army interview, was offered the job, took a deep breath and made it to the banks of the Hudson River within five days of the season's first practice in the fall.

There were a lot of people thinking that, at 28 years old, she was looking for trouble. Deep down, she believed something else. Yes, she was sold on the possibilities of West Point. Mostly, she was sold on herself.

"I thought this was an opportunity of a lifetime, but people wondered, how are you going to recruit there?" Dixon says. "How will you do it? To me, this is an institution that just has so much to offer."

Five months and 20 victories later, it's strange how the perspective of coaching women's basketball at the United States Military Academy changes as you're sitting on the shoulders of the Long Gray Line, bobbing in the air at Christl Arena after the Patriot League Championship game, a scene unlike anything ever witnessed in West Point basketball.

Why did she take this job?

For that experience, she would tell you, but she'd be lying. So much, so fast at West Point was beyond her wildest dreams.

No one remembers them carrying Coach K and another former Army coach, Bob Knight, across the floor. But then, those two never had their players thank the corps of cadets for the support at games during lunch in the dining hall -- only to get a standing ovation in return. Of course, neither of them won a championship at Army.

It's been a season of standing ovations for Dixon and Army. The Black Knights started 5-7 but turned that into a 20-10 finish, including the Patriot League regular-season and tournament titles. When they clinched the title berth, she got the much-coveted victory ride.

The Cadets have fallen madly in love with Army women's basketball. They hadn't seen a winning Division I basketball season in forever there, and soon, our bravest, toughest fighting men were spending the rarest commodity at West Point -- free time -- painting signs for sophomore star Cara Enright.

"You should've seen her face," says Magarity, who spent a quarter of a century as a Division I men's head coach and swore that, "I had never seen, or experienced, anything in my career like what has happened here."

The good vibes spilled from West Point last week down to Madison Square Garden, where Dixon and her parents watched her big brother, Pittsburgh coach Jamie Dixon, make it to the Big East tournament title game.

Before the season, they were the first brother-sister duo in NCAA history to be coaching together. Now, they're the first to ever reach the NCAA Tournament together.

When No. 15 seed Army meets No. 2 seed Tennessee on Sunday in Norfolk, Va., maybe Pat Summitt won't be the only towering presence on the floor. No, maybe it's Micky Mallette, a senior guard who's reached the rarest stature at West Point: a brigade leader, overseeing more than a thousand cadets. Maybe it's Dixon, who didn't just have the guts to take the job on such short notice, but the touch to pull it together. She had taken over a team in turmoil, her predecessor's ouster in the fall leaving West Point in a maddened rush to hire a coach.

West Point won't beat Tennessee, the way it didn't beat Baylor and Connecticut this year. Yet the Black Knights will fight to the bone. Maybe they'll hang with the Volunteers, the way they did with the Bears and Huskies.

"Our players handle pressure situations very well," Dixon says. "That's what they're trained to do."

So much of the joy of coaching the West Point women has been the way her team has bonded, a tightness that Dixon has never seen in her years as a basketball player and coach. In the male-dominated culture at Army, Dixon has found that their time together is the most cherished for her players.

"It's the only time of the day here when it's just the girls," she says.

Together, they've made some history at West Point. They won a championship. Now, they get Summitt and Tennessee. For once, the toughest team won't be wearing orange.

Adrian Wojnarowski is a sports columnist for The Record (N.J.) and a regular contributor to ESPN.com. He can be reached at ESPNWoj10@aol.com. His new book, The Miracle Of St. Anthony: A Season with Coach Bob Hurley And Basketball's Most Improbable Dynasty, is available nationwide.