A look at Sunday's Sweet 16 matchups in the Dallas Regional: 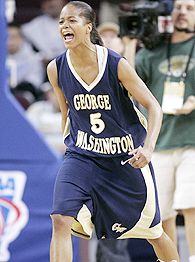 X factors: This is an athletic mismatch. George Washington is a great team that has put together a tremendous season. But the Colonials are going to have a tough time keeping up with North Carolina's speed and will not be able to run with the Tar Heels.

Rebounding will have a huge impact on this game. Getting on the glass is one of the Tar Heels' biggest strengths (plus-11 rebounding margin, 45.7 rebounds per game) and allows UNC to run and get the opponent on its heels. Rebounding, however, is one of George Washington's biggest weaknesses (38.7 rpg).

With UNC leading the nation in points (85.5) and steals (14.8) per game, as well as scoring margin (plus-30.4) -- not to mention ranking in the top 10 in assists (18.4 per game, second), field-goal percentage (46.8, ninth), field-goal percentage defense (34.6, seventh) and rebounding margin (fifth) -- George Washington must play incredible defense, make this a half-court game and slow down UNC.

But UNC will look to do that, too. The Tar Heels are very good at getting back in transition, which forces their foes to play half-court basketball.

Players to watch: The good news for GW, though, is that Kimberly Beck is a great point guard who runs the offense extremely well. She's awesome in the open court and ranks third in career assists at George Washington.

The Colonials' defense typically causes a lot of trouble and forces turnovers. The key is for Beck, one of 11 finalists for the national point guard of the year award, and the Colonials to prevent UNC senior point guard Ivory Latta from getting into the lane. In some of the Tar Heels' bigger games a couple months ago, it was clear Latta wasn't yet at the top of her game. But as the season has progressed, she has taken her game up a notch and certainly appears more confident lately.

I expect Latta to play well. The key for her is to relax and know she has so much balance around her; she doesn't have to force things and just needs to let the rest of the team contribute. Erlana Larkins, a warrior with unbelievable footwork and hands, is one of the best posts I've ever seen.

Bottom line: If George Washington rebounds well, or UNC comes out and shoots poorly, this will be a close game. I always hesitate to say something is impossible. But, with all due respect to the Colonials, it's improbable that they are going to pull another upset over top-seeded UNC like they did 10 years ago in the '97 Sweet 16 (GW was a 5-seed then, too). George Washington is a fabulous defensive team, giving up just 55 points per game. But in its two nonconference losses this season, Maryland and Tennessee pushed that average to 79 points per game. North Carolina just has more experience, has played in the upper tier for many years now and has the ingredients to win a national championship. I've picked the Tar Heels all along to reach the Final Four.

X factors: This game will be decided by how well Katie Gearlds plays. Entering 2006-07, the Purdue guard was easily one of the nation's top seniors. Sure enough, three weeks into the season, she had helped the Boilermakers to a 6-0 start, which included wins over NC State and Baylor for the preseason WNIT title.

But then came Nov. 30 and a 66-55 loss at Connecticut. The Boilermakers were held nearly 20 points below their average; Gearlds was limited to four points, 16 fewer than her average. She was just 2-for-18 from the field and missed all nine 3-point attempts, committing four turnovers. Afterward, Gearlds made no excuses and admitted she got plenty of open looks. "Basketball is a very humbling game," she said.

The next game was also a challenge. Though Purdue won in a rout, Gearlds again finished in single digits with eight points on 3-for-12 shooting. In a loss to Notre Dame next time out, she managed 15 points -- but hit only 32 percent of her shots. Then came the turnaround. Re-energized and refocused, Gearlds rebounded with 33 points -- a career high at the time -- against Boise State on Dec. 21. And she hasn't slowed down much since.

In fact, Gearlds has just been amazing the last month of the season, setting a new career best with 41 points at Wisconsin on Feb. 18. She has simply taken her game to another level and is currently averaging 18.5 points.

At 6-foot-1, Gearlds can be a real nightmare of a matchup. Opponents often don't realize how big the 2005-06 honorable mention Associated Press All-American is until they're on the same court. Gearlds is actually reminiscent of UConn's three-time Kodak All-American, Svetlana Abrosimova. She can play the guard or forward, is strong and physical, can pull up for the 3-pointer (she's hit 79 this season), drive inside or shoot over you.

Purdue has solid seniors and is a little more up-tempo than Boilermakers teams of the past. Purdue also plays great defense, and that's another huge key. The Boilermakers must make Georgia shoot in front of them and not get caught chasing the Lady Dogs.

Both teams are physical. The key for Georgia is to knock down shots.

Players to watch: Forwards Lindsay Wisdom-Hylton of Purdue and Tasha Humphrey of Georgia might well cancel each other out. They're both going to get around the same amount of points and are strong on the boards, though Humphrey can hit the 3.

That means this game might come down to guard play, particularly the effort of the Lady Dogs' Ashley Houts. The freshman is a great point guard on a very talented team.

Senior guard Cori Chambers is playing at a high level and needs to keep it up. She was 7-for-7 from the field, including 4-of-4 from downtown, for 18 points in the first half of Georgia's second-round win over Iowa State. Expect Chambers to key in defensively on Gearlds.

Bottom line: If Gearlds, who is coming off a 26-point performance, plays well, Purdue will win. If the score i