I gave a quick call Monday night to a friend who is -- or was -- a Stanford fan. 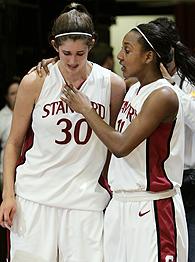 She doesn't really mean it but  it was that kind of horrible night for those who love -- but now don't want to love -- the Cardinal. Some Stanford fans probably feel like they simply cannot take any more.

They want to get that treatment like in "Eternal Sunshine of the Spotless Mind" and try to erase the Cardinal from their memory entirely.

No. 2 seed Stanford's upset loss to 10th-seeded Florida State was the second time in five years that the Cardinal have lost in the second round on their own Maples Pavilion court. The other time was when the Cardinal were a No. 3 seed and fell to sixth-seeded Minnesota in 2003.

But if those two were the only heart-crushers the Cardinal and their faithful have been through in the last 10 years, maybe they could deal with it. However, there's so much more misery to recall.

Now, don't get me wrong. Yes, yes, yes -- I know it's a well-established fact that losing in the NCAA Tournament is not the end of the world. It's basketball. But

Lots of things that aren't "life and death" can totally break your heart. What players are crying about is never just "a game." It's the end of a season or the end of a career -- in both cases, journeys that require extreme dedication and commitment. And fans cry because they invest a lot of affection in the players.

I've said before and I'll say again -- March really isn't my favorite part of basketball season. Because March always includes scenes such as Stanford's Brooke Smith sobbing on teammate Candice Wiggins' shoulder. I don't care who the players are or what schools they attend -- that never gets easier for me to watch. I absolutely hate it.

But  before we go further, let's give all kinds of credit to Florida State. This isn't meant to rain on the Seminoles' parade. For those folks who said things like, "Well, the ACC is just three great teams" -- well, NC State, Florida State and Georgia Tech have all shown that wasn't the case.

Georgia Tech beat DePaul in the first round for the program's first NCAA Tournament win. Yes, the Yellow Jackets lost in the second round to Purdue, but this was a very nice season for Tech.

NC State will attempt to advance to the Sweet 16 on Tuesday, as will the three giants: Duke, North Carolina and Maryland. Florida State is now in the Sweet 16 for the first time in school history.

The Seminoles no doubt benefited from the level of competition they experienced all season in the ACC. It became abundantly clear in this game that FSU is hardly a No. 10 seed. FSU has only one senior, guard Alicia Gladden, who was a third-team All-ACC pick. The Seminoles have won at least 20 games three seasons in row -- a first in program history.

The Seminoles have been to the NCAA Tournament four of the past seven years. FSU definitely isn't coming out of nowhere to pull off an upset like this. Even so, it's still a stunner to see the Cardinal go down this early while playing at home.

Yes, as mentioned, it has happened before. But Stanford actually responded well to the last NCAA loss at Maples. In 2004, 2005 and 2006, the Cardinal advanced to the Elite Eight. Each of those, though, brought more pain to Stanford and its fans.

In 2004, the Cardinal lost the regional final by two points to Tennessee. (And don't dare bring up Stanford's series with Tennessee to any Cardinal fan, unless you just enjoy being punched.)

In 2005, Michigan State topped the Cardinal by seven points. Then, in 2006, there was a three-point loss to LSU and the controversial charge call near the end against Wiggins.

Oh, yeah, there's more. How about the three-point loss to Colorado in the 2002 Sweet 16? The two-point loss to Maine in the first round in 1999? That was a down season for Stanford, which was only seeded No. 7  but Maine was No. 10. Plus, it was the second consecutive first-round loss for a program that has been to six Final Fours and won two titles.

Because the year before

was the game that Cardinal fans desperately wish they could stop being reminded of every year. They wish they could raid ESPN's archive vault, find the highlight clips of it and burn them. That, of course, was No. 16 seed Harvard beating No. 1 Stanford, the only time in men's or women's history a 16 seed has won in the first round. That game was also at Maples, with Stanford stars Kristin Folkl and Vanessa Nygaard forced to watch because both had just suffered ACL injuries in the week before the NCAA Tournament.

And the year before that

was the Granddaddy (or Grandmama?) of all Stanford heartbreaks -- the overtime loss to Old Dominion in the semifinals at the 1997 women's Final Four. Bring that one up to Stanford fans and they probably won't punch you  they'll just fall on the floor in a distraught mess. Still.

Ann Killion of the San Jose Mercury News wrote a column recalling that loss which ran Monday. She wrote: "The postgame locker room was the most devastating scene this reporter has witnessed in two decades of covering sports."

I know it sounds like hyperbole, but I agree with her -- it's the same for me. I've been in many locker rooms where I fully admit I felt sick to my stomach because it's so hard to see players hurting like that and still trying talk to you. But that Stanford locker room in 1997 is still the worst.

After reading Killion's column on Monday, I was talking to Temple coach Dawn Staley about her three losses in the Final Four as a Virginia player. The last of which -- isn't this ironic -- was to Stanford in 1992 in the semifinals.

Then, driving away from the RBC Center, I was thinking about why sports can hurt people so much. And why that hurt really can linger for years and years. Ultimately, it's just the price of really, truly caring about anything.

Sometimes, it seems like it costs way too much. Time makes players and fans realize, though, that it really is worth it. It just doesn't always feel that way.