GREENSBORO, N.C. -- Let's say your significant other dumps you -- via text message. Your dog runs away -- to go live with your ex-significant other. Your boss calls you worthless -- your car gets stolen (and your laptop was in the car, by the way). And your best friend is moving to New Guinea.

But you probably wouldn't feel worse than Duke's women do right now.

The Blue Devils, the No. 1 overall seed in the tournament, are finished -- losing 53-52 to No. 4 seed Rutgers in the Greensboro Regional's semifinal. Duke fell in just about the most painful fashion imaginable. 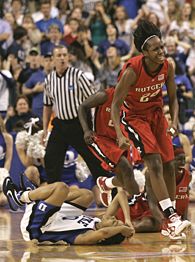 Strike that -- no one could have imagined senior guard Lindsey Harding on the foul line with the absolute least amount of time left you can have in a basketball game -- .01 of a second -- needing two free throws to win and one to send the game to overtime.

And then hitting the back rim twice.

"The thing that shocked me the most is they both came off feeling really good," said Harding, who entered the game having hit 75.9 percent of her free throws this season. "Usually when you shoot -- after all these years of playing -- as soon as the ball comes off your fingertips, you know if it's in or out. I wanted to shoot it, I wanted that position. I released the ball, and the first one missed and it was complete shock -- 'Oh, my goodness.'

"But at that point, you don't want to adjust or anything, you just want to shoot the ball. And the second one came off feeling just as good. And it just didn't go in."

Duke coach Gail Goestenkors said, "My heart breaks for her right now. I don't want this to be her lasting memory, because she's meant so much to this program for so many years."

• 2001: Southwest Missouri State's Jackie Stiles goes nuts against Duke in the Sweet 16, scoring 41 points and handing the Devils an 81-71 loss.

• 2006: Maryland's Kristi Toliver ties the NCAA title game with a 3-pointer with six seconds left. Then the Terps win by three in overtime.