Coach Pat Summitt smiled. The players cut down the nets at Kemper Arena in Kansas City. The band played Rocky Top. The fans clapped and stomped. But it didn't feel like a true celebration. It felt expected. It felt routine. It felt  almost boring.

Tennessee's top player then, junior Chamique Holdsclaw, said in the postgame news conference that she wasn't going to put on a show and act as if she was overjoyed. She was happy, sure, but this was her third title. This was just "supposed" to happen.

At that point, Tennessee had won three consecutive titles and six of the previous 12. Tennessee finished 39-0 in 1998. People were wondering when any other school would win a national championship again. 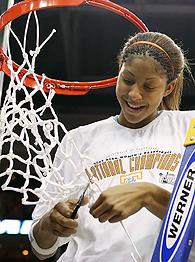 Who knew a drought was coming?

"I never thought it would be nine years," longtime Tennessee assistant coach and former player Holly Warlick said Tuesday, shaking her head and smiling in the winners' locker room after Tennessee had defeated Rutgers 59-46 in the NCAA final.

Yes, women's basketball almost made it a full decade without the Orange Crush reigning supreme.

In that time, Connecticut won four titles, including a three-peat for Diana Taurasi. Duke rose to national prominence -- although not to a national title. Purdue had a senior backcourt come through in a dream season. Notre Dame's iron women, led by center Ruth Riley, won it all. Kim Mulkey added an NCAA title as a coach at Baylor to what she had won as a player at Louisiana Tech. Maryland's Terrapins proved overtime was "their time."

And Tennessee looked on -- mad, puzzled, bewildered, somewhat like a queen who suddenly found her throne didn't belong to her alone anymore and wondered, "Wait! How did this happen?"

Tennessee didn't fall off the map or anything. Holdsclaw finally tasted NCAA Tournament defeat at the hands of Duke in 1999. But even with her gone, the very next year Tennessee was playing in the NCAA title game. But UConn won that.