HARTFORD, Conn. -- If Connecticut looks past West Virginia in the final of the Big East women's basketball tournament on Tuesday night (ESPN2, 7:30 ET), the Huskies might find themselves looking right at the departing form of the Rutgers team bus. 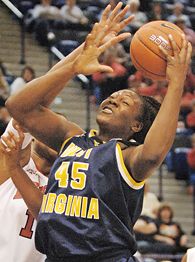 In the press conference following the biggest upset in the tournament's history -- no previous No. 1 seed had ever lost to a seed lower than fifth -- West Virginia coach Mike Carey talked about turning on local television following Sunday's upset against St. John's and hearing speculation about the upcoming final between heavyweights Rutgers and Connecticut. That was news to the coach, who was under the assumption his Mountaineers had a semifinal game against the Scarlet Knights on Monday.

Truth be told, even Carey wasn't entirely prepared for the miraculous run his team has put together in Hartford after losing its final eight regular-season games. After beating Rutgers, he admitted to only bringing two dress shirts on the trip but promised to have Monday's lucky blue button-down washed and ready for the final.

Wardrobe concerns aside, Carey has his team ready, even if the final challenge is the most daunting of all. Rutgers was the tournament's top seed, having raced through the Big East without a loss in the regular season. But by the middle of the second half on Monday night, the West Virginia cheerleaders had a majority of the fans in the Hartford Civic Center boisterously backing the underdogs. That won't be the case in the final, when that loveable underdog will become just another unwanted stray.

Add the weary legs that come from a short bench facing its fourth game in as many days, and West Virginia is essentially looking to hit the Powerball jackpot the day after breaking the bank on a slot machine. But after beating Louisville, St. John's and Rutgers, it's impossible not to give them a puncher's chance.

Since losing leading scorer Meg Bulger to a torn ACL at the end of January, West Virginia -- which lost 58-50 to UConn at Gampel Pavilion on Feb. 4 -- has been a team looking to discover a new offensive identity. Connecticut coach Geno Auriemma said, "When Meg Bulger got hurt, my first reaction was to feel terrible for kids like that. I've experienced that in my own career. But one of the things that struck me was that they are going to be harder to play against. Before, you knew Meg was going to take 20 shots, and if you guard her, that takes care of that. Now you don't know where the shots are coming from; everyone is contributing."

The Mountaineers took some lumps during the search for that balance, but it seems to finally be paying off. The scoring comes from everywhere in the starting five, led by Olayinka Sanni inside and Chakhia Cole and LaQuita Owens on the perimeter. But the key may still be the least potent scorer, freshman point guard Ashley Powell. Handed the seemingly impossible task of breaking Rutgers' famous pressure, Powell responded by committing just one turnover in 33 minutes. Her ability to get West Virginia into its offensive sets may have been the difference in the game.

In wins against Notre Dame and DePaul, Connecticut shut down Bulger-like talents in Megan Duffy and Allie Quigley, but Powell has a chance to hold her own against Renee Montgomery and Ketia Swanier and, as Auriemma suggests, make life difficult for the rest of Connecticut's defenders.

On the other end, West Virginia will have to find new wrinkles to pull another stunner. A 2-3 zone proved effective against the spotty outside shooting of Rutgers, but Mel Thomas and Ann Strother will make the zone pay if it invites similar shot selection from the Huskies. And while Auriemma could only hold his head and chalk it up to kids being kids when asked about some of the Huskies' turnovers against DePaul, the team has been moving the ball well the last two games.

For its part, Connecticut will be looking to come out with the energy and focus that Rutgers never displayed against West Virginia. And motivation shouldn't be difficult, both given the partisan crowd and the fact that the Huskies have been presented with a golden opportunity to extend a streak of capturing either the Big East regular-season or tournament title (or both) in every season since 1993.

The only real difference for West Virginia when the Mountaineers take the court on Tuesday night may be in people giving lip service to their chances. By beating Rutgers, the Mountaineers ensured critics have to keep their doubts largely to themselves. But for a whole host of legitimate reasons, all signs point to a big Connecticut win at the Civic Center.

Just like those signs pointed to a Rutgers win on Monday, and just like the signs on I-84 later pointed Rutgers out of town.