Editor's note: As the NCAA celebrates its 25th season of women's basketball, ESPN and ESPN.com count down the top 25 moments of NCAA Tournament history. Here, we continue the countdown with memorable NCAA moment No. 7, Texas' perfect season en route to the 1986 NCAA title.

It was supposed to be Cheryl Miller's farewell tour. Her final moments in the college spotlight.

But that's the irony of the 1986 Final Four. What was hyped -- admittedly, by the media -- as Miller's last hurrah, was upstaged by one of the tournament's best team performances as Texas stole the show -- and the title.

Of course, Texas was hardly an underdog. The Longhorns entered the NCAA Tournament that season ranked No. 1 in the AP poll for the third consecutive season. They were also the only undefeated team in the country and, in the last month of the regular season, had beaten three opponents by at least 57 points. And that's not a typo.

Texas, a No. 1 seed in the Midwest Regional, had it easy early on. After a first-round bye, the Longhorns routed their first two opponents by an average of 33.5 points. They then squeaked out a 66-63 win over Mississippi State to reach their first Final Four, in Lexington, Ky.

Fellow No. 1 seed USC -- which had lost by 16 points to Texas on Dec. 10 that season -- also easily advanced, its closest win en route to the Final Four being a 14-point victory. But No. 1 Virginia was knocked off in its first game and Tennessee upset top-seeded Georgia in the regional semifinals en route to a Final Four date with the third-ranked Women of Troy.

USC easily eliminated the Lady Vols in a 24-point win. Texas didn't have a difficult time, either, advancing to the championship game on a 25-point victory over fifth-ranked Western Kentucky.

Motivated by all the attention bestowed upon Miller, the Longhorns didn't slow down two days later, either. By halftime, they led USC by 10 points, 45-35. After 40 minutes, and with the help of 24 points on 9-for-14 shooting by Final Four most outstanding player Clarissa Davis, Texas clinched its first national title -- and just the second unbeaten season in women's NCAA history -- with a 97-81 victory.

Davis, who came off the bench to average 20.6 points in five NCAA Tournament games, was one of five Longhorns in double figures, and finished with 24 points (she averaged 13.5 for the season) and 14 rebounds, which were twice her average and included seven on the offensive glass). More importantly, Texas' reserves came through in crunch time, outscoring their USC counterparts 58-4. Texas also outrebounded USC 42-32 and shot 59 percent from the field to the Trojans' 45 percent accuracy. 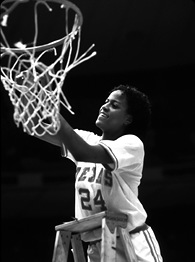 "This is the deepest team in college basketball," said Texas coach Jody Conradt, who was in her 10th season. "It doesn't matter who starts. This is a team of 13 individuals."

Miller finished with 16 points on 2-for-11 shooting and six rebounds in 28 minutes before fouling out. Southern Cal's other well-known star, Cynthia Cooper, scored a game-high 27, going 11-for-22 and adding a team-high five assists in 36 minutes.

Miller walked away as the all-time tournament leader in points (333 in 14 games, 23.8 ppg average), though she was later passed by Tennessee's Bridgette Gordon (388) and Chamique Holdsclaw (479), who still holds the record. Though Holdsclaw (198) also overtook Miller's rebounding record (170), the USC star's record of 91 made free throws still stands.

Texas had its share of records, too -- both in the tournament and for the season. Three of the top six shooting performances in Texas team history occurred in 1986, including a 75 percent accuracy against Missouri in the second round. The Longhorns' 26.7-point average margin of victory that season and 54.9 field-goal percentage on the season still rank No. 1 in program history. Texas' scoring defense in 1986, 57.2 points per game, remains No. 4 in the annuls, and a plus-8.7 rebounding margin ranks fifth.

And on the way to its perfect 34-0 season, Texas turned away all comers in a challenging schedule that included 11 ranked teams.

Davis went on to lead Texas to another Final Four the following season, and the Longhorns reached at least the Elite Eight in all four years she was in Austin. She won Kodak All-America honors twice and was the Wade Trophy and Naismith winner as a senior in 1988-89. On the Final Four records charts, her 56 points and 32 rebounds in 1986 remain No. 2 on both lists.

To read another story about Texas' 34-0 team that ESPN.com produced four years ago, click here.

Click here to see when the next memorable moment will air in our countdown.