KNOXVILLE, Tenn. -- Pat Summitt had never seen anything like it. Not in three decades on the sideline. Not in 1,108 games. 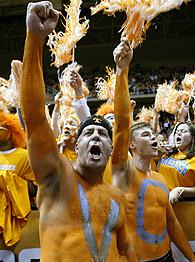 "Not in my coaching career," she said.

Tennessee's coach, of course, was referring to the 19-0 onslaught Duke opened its 74-70 win with Monday, leaving the 21,118 mostly orange-clad fans -- including a mostly naked (save for some orange body paint, some shorts and a headband) Tennessee men's coach Bruce Pearl -- with little to cheer about.

Nothing, not even a 30-second timeout halfway through the run or Candace Parker and all her magic could stop the top-ranked Blue Devils early on. Duke sophomore Abby Waner opened the run with a layin, teammate Lindsey Harding added two more and Waner capped it with back-to-back 3-pointers. Tennessee missed its first eight shots and failed to score its first point until 5 minutes, 58 seconds had ticked off the clock.

And yet, the hole -- as big as it was -- didn't do in the Lady Vols, who rallied to tie the score at 48 with 10:48 to play. Summitt even saluted her team's resiliency in her postgame interviews.

Summitt wasn't as forgiving, however, when it came to Tennessee's 8-of-17 performance at the foul line (the Blue Devils were 14-of-15). "Obviously, free-throw shooting for us was very costly," she said.

When the players were asked about their 47.1 percent performance from the free-throw line, Parker -- who shot a paltry 1-for-7 on foul shots -- didn't even give her teammates a chance to answer.

"That's my fault," said Parker, who had shot 54 percent at the foul line heading into Monday's game. "If I would have hit my free throws, maybe we would have won. I take full responsibility. It won't happen again."

Save for the occasional buzzer-beater, rarely does one shot make or break a game. But when the final score is decided by four points and the losing team misses nine free throws, you can't help but wonder "what if?"

That loaded two-word phrase isn't usually associated with Parker (unless you're debating how soon her WNBA career might begin), but the super sophomore who can play below and above the rim just couldn't figure things out at the charity stripe Monday. She missed both her and-1 attempts in the first half. In the second, she twice came up empty when she was sent to the foul line for two.

Parker's last misses were the costliest -- and the least expected. In an ironic twist, the one free throw Parker nailed -- another and-1 after she was fouled by Alison Bales -- tied the score with nearly 11 minutes to play. At that point, Tennessee seemed to have all the momentum, as Parker's three-point play capped a 21-10 run.

But Duke picked it up, too, stretching the lead back to six points. Still, Parker responded, draining a six-foot jumper, then adding a 3-pointer -- just her fifth trey of the season -- to keep it close. But when she stepped to the line with 4:51 to play and Tennessee trailing by five, Parker missed both free throws. And instead of cutting Duke's lead to three, the Blue Devils added some more cushion as Bales nailed a layin two possessions later.

To her credit, Parker finished with a team-high 22 points and added 10 rebounds, six blocks and four assists and only two turnovers. And while teammate Alexis Hornbuckle added 19 points, fellow starters Sidney Spencer, Nicky Anosike and Shannon Bobbitt combined to shoot just 5-for-25 from the field. The Lady Vols actually shot better from 3-point range (10-of-22, 45.5 percent) than from the field (26-of-72, 36.1 percent).

And Tennessee's free-throw shooting had even less.

• Sidney Spencer had heard that members of the Tennessee's men's basketball team were planning on being front and center in the student section for Monday's game. And earlier this week, men's coach Bruce Pearl told Summitt he would join his players and paint his chest. Pearl lived up to his promise, cheering on the Lady Vols while clad only in black adidas shorts and a matching Tennessee headband, with the letter V painted on his chest as several men spelled out "Tennessee Vols."

Despite the loss, Spencer appreciated the support.

"Ever since Bruce Pearl got here," she said, "we have been friends with the guys. They have supported us, and we have supported them. It's great for our team."

Even the opponents liked the idea.

"I'm going to go suggest it to [Duke men's coach Mike Krzyzewski]," Duke's Abby Waner said. "It's great that the support is there. We get that from our men's program, too. I'm sure the team appreciated it. It shows a lot about the respect women's basketball is getting."

• This time of year, the Women's Basketball Hall of Fame, which is located about one mile from the University of Tennessee campus, is typically closed on Mondays. But when there's a big game in town, and thus, a large out-of-town crowd expected, Hall of Fame officials make an exception. That was the case Monday, as plenty of fans flocked to "honor the past, celebrate the present and promote the future."

Dana Hart, the Women's Basketball HOF general manager, estimated that 110 guests -- including a 25-person group from Durham, N.C., would visit the site Monday. That's four times the normal foot traffic for Mondays (the Hall is open on Mondays only from May 1 through Labor Day), said Hart, who added that the Hall also opens an hour or two early on Sundays if there's a marquee Lady Vols matchup that afternoon. Still, Monday's crowd pales in comparison to the 300 guests who visited the Hall last year around the UConn-Tennessee matchup. "Connecticut games seem to be our strongest draw," Hart said.

Melanie Jackson is the women's basketball editor at ESPN.com.