AUSTIN, Texas -- When Jody Conradt won her first game as a
coach, women played six-on-six basketball and only two players
could go the length of the court.

How times have changed.

Long considered a women's coaching pioneer who helped shape the
game with her powerhouse Texas teams of the 1980s, the Hall of
Famer retired Monday night after the Longhorns failed to reach the
NCAA Tournament for the second straight year.

The coach, who led Texas to its only national championship in
1986 and won career victory No. 900 just last week, said simply it
was time for someone else to try to bring a national title back to
Austin.

"It's a winning business. Losing is not acceptable," an
emotional Conradt said as she addressed the media with her team
immediately after the NCAA Tournament selections were announced.

"The easiest thing to change is the leadership," she said.

The 65-year-old Conradt, inducted into the Hall of Fame in 1998,
is second on the Division I college basketball victory list, behind
only Tennessee women's coach Pat Summitt.

Texas (18-14) entered the Big 12 tournament having lost six of
its last seven conference games. The Longhorns won their first
tournament game in Oklahoma City but then lost to Oklahoma (No. 10 ESPN/USA Today; No. 9 AP) on Wednesday. 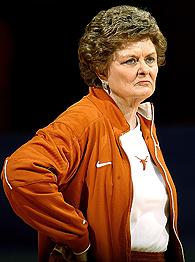 Conradt fought back tears several times during the news
conference. Her players stood off to the side, many of them sobbing
and hugging.

"What she's done for the game is so important. She's a legend,
a pioneer," senior Tiffany Jackson said. "I don't think anyone
saw it coming."

Conradt had most recently reached the Final Four in 2003 and
with top recruits coming in, the program seemed ready to stay among
the national elite for some time.

But the program went on a slow decline instead. Although Texas
finished first and second in the Big 12 the next two seasons, the
Longhorns were eliminated from the NCAA Tournament in the round of
16 in 2004, the second round in 2005, and fell to 13-15 overall
last season when injuries, immaturity and inexperience disrupted
one of the top recruiting classes in the country.

Texas seemed to be turning things around this season around
until some of the same problems led to a five-game losing streak in
February, the longest in the program's history.

Conradt said she couldn't find the formula to bring the best out
of her players this season.

Player Brittainey Raven said Conradt told the team before the
NCAA selections were announced. "I wasn't expecting that at all.
Everybody's faces just dropped," Raven said.

Conradt said the decision to leave was hers and was not pushed
out of the job by the university. She had been thinking about
retiring for several days and talked to friends and family about
it.

"Her choice totally," said Chris Plonsky, Texas women's
athletic director, who seemed as saddened and stunned by the
announcement as anyone in the room. "Jody would never go beyond a
point where she felt she wasn't living up to [her] standard."

Summitt, who said Conradt called her Monday with the news,
praised her as a pioneer in women's basketball and called her a
mentor.

"She's been a great friend of mine, a mentor, and we're going
to miss her. But she's left her footprints all over the game and
all over a lot of us coaches," Summitt said.

Conradt is 900-306 in 38 seasons -- four at Sam Houston State,
three at Texas-Arlington and 31 at Texas. Her team in 1985-86 when
34-0 and set a standard for athletic women's teams that would
dominate opponents with speed, size and strength.

"It's hard to even begin to put into words what Coach Conradt has done for women's basketball. She's been someone who so many of us have aspired to be like as a teacher, mentor and coach," Texas Tech coach Kristy Curry said. "She will be missed, but her impact on the game will last forever. She deserves nothing but the best in her retirement, because her best is what she gave our great game."

When she starting coaching at Sam Houston State in 1969, she was
a physical education teacher who didn't get paid to coach. She
retired with two seasons left on her current Texas contract at
$540,500 per year.

"She's an icon in women's basketball," Stanford coach Tara
VanDerveer said. "Nine hundred wins is mind boggling. As great a
coach as she is, she's an even better person. I've admired her and
the job she's done. I'm happy for her she's retiring and moving on,
but our game will miss her. I only have the ultimate respect and
admiration for her. It has to be hard. She's from my era a little
bit. You think of coaches around my age retiring -- whoa."

Connecticut coach Geno Auriemma, who beat Conradt in the Final
Four in 2003, also praised Conradt for her contributions to the
game.

"I think they established something that every other coach in
America wanted to build," Auriemma said. "I'm sure she'll be
involved somehow in the basketball community. She's just too
valuable a resource to just let her walk away."