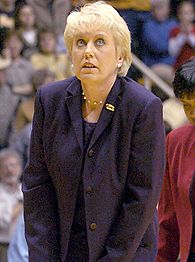 Portland resigned Wednesday night, the university said in a statement.

The coach faced a series of discrimination allegations during her tenure. Most recently, Portland and Penn State settled a lawsuit in February by former player Jennifer Harris, who claimed Portland had a "no-lesbian" policy on her team.

Portland built the program into a powerhouse, though it slipped to subpar records in recent seasons.

"This was obviously a difficult decision," Portland said in Thursday's statement. "I am very appreciative of the opportunity to coach at Penn State, which has become a special place for me and my family. I am proud of what we have been able to accomplish with the Lady Lion program through the years."

Portland compiled a 606-236 record at Penn State, and earlier this season became the ninth women's basketball coach to win 600 games at one school. She had two years left on her contract.

Athletic director Tim Curley spoke with Portland about the coach's job status several times in the past three weeks since the end of the 15-16 season.

At a news conference Thursday, Curley said Portland was not forced to resign. He deferred when asked what affect the Harris lawsuit had on the program, citing confidentiality requirements associated with the settlement.

He said he wasn't completely surprised by the decision.

"All of us know of her many coaching accomplishments, and the impact she has made on basketball, Lady Lion basketball, women's athletics and on the many outstanding student-athletes she positively impacted ... here at Penn State," Curley said.

In a December 2005 lawsuit, Harris accused Portland of "humiliating, berating and ostracizing" her, and claimed she was told she needed to look "more feminine." The suit alleged Portland tried to force Harris, who says she is not gay, to leave the team.

Last April, Portland was reprimanded following a university investigation and threatened with dismissal for any future violation of the school's discrimination policy. She also was fined $10,000 and ordered to take professional development "devoted to diversity and inclusiveness."

Portland maintained Harris' departure was purely related to basketball issues and disagreed with the school's findings.

In documents filed in federal court last May, Harris claimed Portland had a policy of "no drinking, no drugs, no lesbians." Harris initially sought more than $1.1 million in compensatory damages from Portland and the university, plus unspecified punitive damages and other conditions.

Harris, Portland and Curley, another defendant, said in a joint statement last month that they had reached "an amicable settlement."

Harris averaged 10.4 points for the Lady Lions in 2004-05, third best on the team, before transferring to James Madison. She played one game for James Madison before ankle surgery in January.

"This did not have anything to do with the lawsuit to our knowledge," Karen Doering, attorney for Harris at the National Center for Lesbian Rights, said regarding Portland's resignation.

Portland was criticized in the past for comments regarding homosexuality. In 1986, she reportedly told the Chicago Sun-Times she didn't allow lesbians to play on her team. In a 1991 story in The Philadelphia Inquirer, several former players, recruits and colleagues of Portland said the coach did not tolerate homosexuality among her players.

More recently, several former players or people affiliated with the team have told various news outlets of conversations with Portland in which they alleged the coach made comments indicating bias against lesbians.

As a player, Portland won three national championships with Immaculata College (1972-74) at the tournament sponsored by the Association of Intercollegiate Athletics for Women.

In 1980, Portland was hired to succeed Pat Meiser by Joe Paterno -- the only head coach Paterno hired during his tenure as Penn State's athletic director.