NEW BRUNSWICK, N.J. -- The Rutgers women's basketball team
accepted radio host Don Imus' apology Friday for insulting them on
the air, saying that he deserves a chance to move on but that they
hope the furor his words caused will be a catalyst for change. 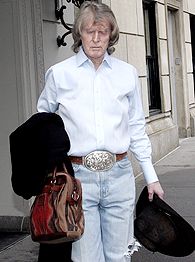 "We, the Rutgers University Scarlet Knight basketball team,
accept -- accept -- Mr. Imus' apology, and we are in the process of
forgiving," coach C. Vivian Stringer read from a team statement a
day after the women met personally with Imus and his wife.

"We still find his statements to be unacceptable, and this is
an experience that we will never forget," the statement read.

Several Rutgers players declined to comment on the meeting
Friday, but a person who attended the meeting, who spoke on
condition of anonymity because it was a private meeting, told The
Associated Press that emotions ran high, with tears on both sides.
Imus did not shed any, but his wife, Deirdre, did, according to the
person at the meeting, and she hugged each of the players
individually.

Stringer opened the meeting with a statement and was followed by
Imus, then by the players and some of the parents, the person said.
After the meeting, the team voted on whether or not to accept Imus'
apology.

At a news conference later Friday, the Rev. DeForest Soaries,
Stringer's pastor, announced a plan to hold a town meeting within
30 days on the Rutgers campus involving educators, entertainers,
young people and clergy to address a culture that "has produced
language that has denigrated women."