STORRS, Conn. -- With Sue Bird and Diana Taurasi in the starting lineup for the opposing team in the University of Connecticut's first exhibition game, the Huskies confronted a vivid -- and in Taurasi's case, verbose -- reminder of the program's illustrious past. But by the end of the night, and for reasons far more noteworthy than the 101-87 victory in a meaningless win, the future looked pretty good. 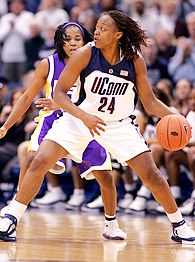 A stable line of succession often separates order from chaos in a society, be it a democracy, a fiefdom or the totalitarian states that are college basketball programs with multiple national championships. Seniority has its perks in such cases, whether it's handing someone a crown as the oldest child or selecting a party elder as a candidate for voters to judge. You sit, you learn, you support, and when it's your turn, you rule.

By signing to play for Geno Auriemma, players at Connecticut become part of a family every bit as dynastic as the Plantagenets or Windsors. As a result, ascension to the throne has been a steady and carefully crafted process. From Rebecca Lobo to Nykesha Sales to Bird and Taurasi, each successive basketball generation arose from its predecessor and did its part to add to the banners in the rafters at Gampel Pavilion.

But as this season begins, the throne is very much vacant for a team without a single senior. Mel Thomas is the leading returning scorer, and the only returning player to average double-digit points last season, but she's hardly the focal point of the offense. Renee Montgomery was outstanding in the NCAA Tournament and might just fit the bill, but she averaged 8.9 points per game last season and shares minutes in a crowded backcourt with Thomas and Ketia Swanier. Tina Charles is the highly touted freshman, the nation' top high school player last season, but few first-year players take command of a program like this. Even Taurasi had Svetlana Abrosimova, Sue Bird, Swin Cash and others around when she was a freshman.

"I've found, it takes a long time for them to recover if they lose their confidence early," said Auriemma last week, discussing whether Charles would be in the starting lineup for the first exhibition (she was).

All of which leaves Charde Houston, who offered a rather candid assessment of how she views her place in this basketball kingdom in the hills of Connecticut.

"When I'm consistent, when I play like I know how, then I'm a really good player," Houston said after practice last week. "When I don't, I can look like one of the worst players on the collegiate level."

When Houston arrived in the fall of 2004, just months after Taurasi had finished her career by guiding the Huskies to the program's fifth national championship, she seemed destined to follow in that line. After all, Houston left California as the state's all-time leading high school scorer, ranking ahead of names like Cheryl Miller, Lisa Leslie and even Taurasi. Despite averaging fewer than 20 minutes a game as a freshman, Houston finished third on the team in scoring, second in rebounding and first in steals and blocks. She even authored an early signature moment, scoring 19 points in a one-point loss against Tennessee with a dynamic offensive display that seemed to bode well for the program's future.

But instead of making strides as a sophomore, playing with the same thinly veiled deference to seniors Ann Strother and Barbra Turner as stars-in-waiting before her, Houston backpedaled. She drifted in and out of games, literally and figuratively, showing both bursts of brilliance and maddening periods of inconsistency. Starting just four times all season, Houston averaged 9.5 points per game. The simmering discontent eventually boiled over in the team's regional final game against Duke, when Houston played just 10 minutes and shot 0-for-5 from the field in the overtime loss. 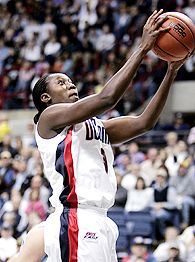 "I don't want to say that it wasn't fun, it was just more thinking than it should have been," Houston said about her roller-coaster first two seasons. "It got to a point where I was thinking instead of actually playing the game."

But instead of transferring, as rumors hinted she might after the debacle against Duke, Houston remained on campus over the summer. While she said those months helped her the most spiritually, the process of self reflection had its basketball components.

"So it got to a point where I just wanted to learn the plays," Houston said. "You have to know the plays, you have to work hard, you have to be vocal. And I worked on all three of those things, and it's been good for me so far."

On Connecticut's first basket against Team Concept in the exhibition opener on Nov. 2, Charles passed to Montgomery out of the high post, and Montgomery fed the ball into the post, where Houston had sealed off her defender. A quick pivot later, Houston converted the easy layup. It was simplicity, but it was also three of the team's most vital components working together, with Houston the anchor. She would go on to score her team's first six points, showing all of the explosiveness and very little of the hesitation that plagued her in the past.

"I heard her talking more in today's game -- and I know I haven't been around that much -- than I've heard her talk in the entire time I've known her," Bird said of Houston's newfound aggressiveness.

It's recognizing how much the past has cut into her present and future that gave Houston pause after last season.

"When you look, and you reflect back on your years here -- when I reflect back on my years here at Connecticut, I just remember the first day of school, and now I'm a junior," Houston said. "And there comes a time when you just can't accept the past, you have to want to change yourself and make changes for the best, and that's what I wanted to do. Because my years are winding down here, and I'll be gone before I know it, and I don't want to leave on a bad note."

Deep into the second half, at a point when the game had in some ways started to look like a scrimmage, Houston missed a free throw. But instead of jogging back down the court or fading from the action, she wasted all of two seconds before stealing the outlet pass and regaining possession for the Huskies. On a night when she finished with 30 points and 19 rebounds, that one play said as much as anything about her focus.

Auriemma concurred, looking past the gaudy stats when he said, "I was most encouraged by some of the hustle plays she made."

Does that mean the Huskies are Houston's team? As tempting as it is to extrapolate what she did last Thursday over the course of an entire season, it was an exhibition in early November against a team with two superstars in the heart of their offseason and a supporting cast that wouldn't finish above .500 in the Big East. It was a performance that had Auriemma relaxed and smiling after the game but also unwilling to take anything for granted.

"I've stopped asking, because I don't want to put myself in a situation where I'm going to expect A, B, C and D, and she's going to tell me she's going to do that, and come two months from now, it's not done," Auriemma said of expectations with Houston. "I'd rather just not think of it, not talk about it, not have her answer it, and just evaluate her on every performance every day. And so far, she's lived up to her word."

Houston has the potential to make this team something special, even by Connecticut's lofty standards, but perhaps after all the years of prominent stars leading the way, this year's team is a reminder that when all is said and done, it's Auriemma's team.

Holding court after practice last week with the sizable press contingent that follows the team on a daily basis, Auriemma joked that he had been a fool not to walk away into the sunset after Taurasi graduated. But it's hard to look at this year's youthful roster and not imagine the pleasure he has taken in crafting it.

The backcourt was perhaps the most pressing concern entering last season, but Montgomery's arrival coupled with the maturation of Thomas and Swanier was one of the season's most positive developments. Unlike the year before, when a season's worth of work culminated only in Nicole Wolff playing out of position at point guard at times during key games late in the season, last year's growing pains seemed worth the discomfort.

Montgomery, in particular, has all the intangibles in the world, along with the very tangible ability to rescue a busted offensive set and finish in traffic.

"Renee is definitely beyond her years in the maturity she shows," Bird said.

And even with injuries once again creating uncertainty about the availability of Brittany Hunter, any questions around the rebuilt frontcourt this fall seem to have more to do with the exact level of production rather than the presence of it at all. Though Charles and Kaili McLaren are freshmen, and seemed at times like newcomers in their unofficial debut, their inexperience is more likely to disappear than their size.

Aside from the 2001-02 team, which was arguably the greatest in the game's history, Connecticut's statistics have remained remarkably steady in recent years. Titles or not, Taurasi or not, Auriemma's teams have generally scored between 70 and 75 points per game, limited opponents to less than 40 percent shooting from the field and had slightly, but not staggeringly, more assists than turnovers.

The one place the numbers haven't held steady is rebounding margin. Steadily declining over the last five years, the margin fell to a paltry 3.2 per game last season. The Huskies simply didn't have enough bulk inside, and it cost them.

But in Charles, an athletic and gifted post scorer who will be among the nation's top freshmen, and McLaren, bulk isn't an issue.

A McDonald's All-American in her own right, the 6-foot-2 McLaren brings almost unprecedented size to Storrs. She is undeniably wide and thick, but the nimbleness and soft touch that made her such a prized recruit are evident when watching her work on the boards. While by her own admission she still has a lot of conditioning work to do, a summer spent on campus appears to have her ready to contribute right away.

"From the basketball aspect, it kind of started out really slow," McLaren said of her summer. "I wasn't used to playing at a certain level of basketball, the way they played, how they do things. But as time progressed, my teammates helped me through and I kind of got to their level."

And all of this doesn't even take into account sophomore Kalana Greene, who Auriemma said might have been the team's most impressive player in the opening weeks of preseason practice.

Early November is perpetually a time for optimism in basketball and retail sales, but the positive vibes emanating from the campus in Storrs this November feel different than at any point since Taurasi took her last shot in a Connecticut jersey.

Fittingly, it was Taurasi who best summed up the internal expectations once again flourishing for the Huskies, even as they languish outside the top 10 in some national preseason polls.

As Auriemma recounted it, Taurasi left the court last Thursday night with this message for her old coach: "If you guys don't go to the Final Four, you stink."

The King is dead; long live the King.