ATLANTA (AP) -- With her offense down the stretch and her defense
on the final play, Diana Taurasi put Connecticut back in the
women's national championship game. 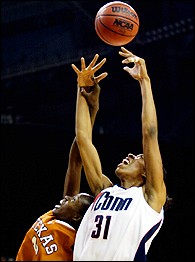 Taurasi, bothered by a sore ankle and back, still managed to
score 26 points and keep the Huskies on course for their third
title in four years with a 71-69 victory over Texas on Sunday
night.

UConn (36-1) will meet Tennessee in the championship game, the
third time the teams have met for the title. Earlier, the Lady Vols
beat Duke 66-56 in the other semifinal to advance to Tuesday
night's final.

Taurasi's 3-pointer from well behind the arc gave the Huskies
the lead for good, 67-66, with 2:07 remaining.

Appropriately, Taurasi made the key defensive play, too,
knocking the ball away from Alisha Sare as the Texas player
attempted to go up for a jumper just before the buzzer.

Taurasi grabbed the loose ball and held up her right index
finger as the horn sounded. Yes, the Huskies still have a chance to
finish No. 1.

"There's just something about this team,'' Taurasi said. "We
just don't want to go home, and we showed it again today.''

Taurasi, who had not practiced since the regional final in an
attempt to heal, appeared a bit tentative and pulled off few of the
flashy moves that made her the best player in the country.

But she came through when her team needed her most.

With Texas leading 66-60, Taurasi zipped a great no-look pass
from outside the arc to Willnett Crockett standing alone under the
basket, sparking the game-ending run.

On UConn's next possession, Taurasi worked into the lane, made
the shot and drew a foul, leading to a three-point play that drew
the Huskies closer.

Finally, she put them ahead to stay with the long 3-pointer.

"She was out of it for a while,'' coach Geno Auriemma said.
"It was so physical out there. I say it over and over again. We
have Dee (Taurasi) and they don't. That's probably the biggest
reason we won.''

The Longhorns went nearly three minutes without scoring, finally
breaking the drought on Jamie Carey's 3-pointer with 28 seconds
left. That was the last basket of the game.

Crockett gave Texas a chance by missing two free throws with 8.2
seconds left, but Taurasi made sure the Longhorns didn't get a
chance to tie or win it.

The little-used Sare raced downcourt and tried to get off a
shot. As the 5-foot-8 senior began to go up at the 3-point line,
the 6-foot Taurasi got a hand on the ball and knocked it away.

"I was worried about just what happened,'' Texas coach Jody
Conradt said. "Taurasi made plays. You know when you're playing
against a great team and a great player like Diana, you leave
yourself open.''

UConn beat the Lady Vols 63-62 in overtime during the regular
season. The Huskies hold a 10-6 lead in the series, which includes
two victories in the title game.

Last year, UConn romped to a 79-56 victory over Tennessee in the
semifinals, then finished off a perfect 39-0 season by beating
Oklahoma in the title game.

Taurasi was the only holdover starter from that team; the other
four went in the first six picks of the WNBA draft. But Auriemma
brought in a talented group of freshmen and teamed them with the
player of the year for another winning combination.

UConn has won five straight since its NCAA-record 70-game
winning streak was snapped by Villanova in the Big East final.

"We're looking forward to it,'' Taurasi said. "There's a
championship at stake, and we let one get away earlier. We'll be
ready.''

The Longhorns pushed the lead to 50-41 with 12½ minutes
remaining, prompting Auriemma to call a timeout. Texas wouldn't
fade away, and Taurasi had to fight through an uncharacteristic
night.

Taurasi rarely drove to the basket, preferring to stay on the
outside and shoot jumpers. She was shadowed by Kala Bowers and Tai
Dillard, who worked hard to deny the UConn star from getting the
ball.

It was barely enough.

Stacy Stephens scored 16 points to lead the Longhorns, but she
missed a crucial shot in the final minute.

The Longhorns went ahead for the first time, 30-29, on Stephens'
follow with two minutes left. They went to the locker room with a
35-33 lead when Nina Norman hit a straightaway jumper as the buzzer
sounded.

Officials initially ruled a 3-pointer, but changed the call
after deciding that Norman's foot was on the line.

Texas came in with a 17-game winning streak, the longest in the
nation. But the Longhorn women suffered the same fate as the men,
who were beaten by Syracuse in the national semifinals at New
Orleans a day earlier.

Texas, the only non-No. 1 seed to make it to Atlanta, was a
perennial power in the formative years of NCAA women's basketball.
The Longhorns were the first women's team to go through a perfect
season, winning the national title in 1986 with a 34-0 record.

They went to the Final Four for the second year in a row in '87,
but had not been back since as other schools -- notably Tennessee
and UConn -- became the sport's most dominating teams.