INDIANAPOLIS (AP) -- Baylor's comeback ranked among the best in Final Four history. Its defense was determined and incredibly stingy.

The Lady Bears were simply better -- and now the end of their remarkable, uplifting redemption story will be told on the final night of the season in the national championship game.

Baylor got 21 points from Sophia Young and major contributions from Emily Niemann and Abiola Wabara to beat LSU 68-57 on Sunday night in an impressive Final Four debut for a program that not long ago was the worst in the Big 12.

"Wow! That's a good team we just beat," said coach Kim Mulkey-Robertson, who looked misty-eyed as she pumped two fists up to the roaring Baylor fans.

The Lady Bears (32-3) have brought a new feeling of pride to a campus stained by scandal in the men's basketball program. They'll take a 19-game winning streak -- the longest one going in NCAA women's basketball -- into the title game Tuesday night against fellow Final Four newcomer Michigan State. The Spartans beat six-time national champion Tennessee 68-64 in the second semifinal.

LSU (33-3), seeded No. 1 overall in the NCAA Tournament, jumped out to an early 15-point lead but the Lady Bears came storming back to tie it at halftime. The Lady Tigers, who looked restless at times on offense, then built a six-point lead in the second half, only to wilt again.

"We have a quote in our locker room that says you don't always get what you want, you get what you earn," LSU coach Pokey Chatman said. "I don't think our kids did enough to earn it. We got beat in the paint, we got beat in execution and that right there was the ballgame."

Baylor frustrated LSU to such an extent with its 3-2 zone that only four players scored for the Lady Tigers, who held their own on the boards but still got outscored 32-24 inside. The comeback was the third-largest in a Final Four game. Michigan State overcame a 16-point deficit in the second semifinal to tie the record set by Notre Dame against Connecticut in the 2001 semifinals.

Mulkey-Robertson's message when faced with the huge deficit was simple and direct. 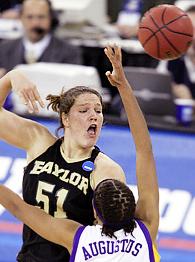 "Just put a little fire in your belly, have a little oomph and don't get embarrassed on national television," she said. "And take your time. We have plenty of time."

As it turned out, they did.

Baylor went ahead to stay when Chelsea Whitaker, who had eight turnovers in the regional finals against North Carolina, sank two free throws for a 52-51 lead with 6:17 remaining.

Young then picked off an LSU pass into the post and Baylor capitalized with Wabara's three-point play for a 55-51 lead. When Young hit a jumper 30 seconds later, Baylor led 57-51 and the Lady Bears had the cushion they needed.

Not even national player of the year Seimone Augustus could save LSU, which got to within six in the final 90 seconds but then missed two shots, bricked a free throw and turned the ball over on its last four possessions.

"You can't ever be happy when you lose, especially on a stage like this," Augustus said.

Augustus scored 22 points but shot just 10-for-26 and took four 3-pointers -- something she rarely does -- only to miss them all. Sylvia Fowles, LSU's muscular 6-foot-5 freshman, added 13 points and 12 rebounds and Temeka Johnson had 14 points and seven assists.

But it just wasn't enough against Baylor's defense. The Lady Bears have won 76 straight games when holding opponents under 59 points.

Niemann gave Baylor a big lift off the bench with 14 points on 5-for-7 shooting and Wabara was a difference-maker with 12 points on 4-for-6 shooting.

"It's been like that all year -- we've had different players step up," Mulkey-Robertson said.

Wabara went scoreless and played only six minutes in Baylor's 71-70 loss to LSU on Nov. 14, when the Lady Bears rallied from a 21-point deficit. She was also a key figure Sunday night in the defense against Augustus.

"I thought Abby really stepped up big time for us," Young said. "She did a great job against Seimone, keeping her at her average in scoring."

Mulkey-Robertson has needed just five years to get Baylor to the biggest game in the program's history. After a long tenure as an assistant at Louisiana Tech, she moved to Baylor in 2000, inheriting a team that had gone 7-20 the season before.

The Lady Bears won 21 games in her first season and they've been on the rise ever since.

For a while, though, they looked lost in this one. Baylor trailed 24-9 and Young was struggling. But Mulkey-Robertson, a feisty point guard in her playing days, kept encouraging, pleading and cajoling and the Bears fought back.

They tied it at 28 at halftime, only to fall behind 47-41 when Johnson, LSU's supercharged 5-foot-3 point guard, drove for a basket midway through the second half. But the Lady Bears answered quickly.

"It's always good to take momentum into the locker room, especially when we had the kind of start we did," Niemann said.

Blackmon, who usually teams with Young in a formidable inside combination, was quiet in this one with only seven points. But her bucket and three-point play highlighted a 9-2 run that sent Baylor into a 50-49 lead.

Fowles countered with two free throws to put LSU back in front with 6:54 to play, but that was the last time the Lady Tigers would lead. Whitaker made her two free throws and the Lady Bears started to pull away.

The frenetic pace that had been expected with these two quick, athletic teams never developed. Both kept the other from running and the game immediately turned into a half-court contest.

Baylor has been reeling from the death of men's player Patrick Dennehy, who had been missing for six weeks before his body was found a few miles from campus in July 2003. Former player Carlton Dotson was charged in the death and NCAA violations were later uncovered in the program.

Then along came Mulkey-Robertson and her Lady Bears to help set things right at the world's largest Baptist school.

"It's the past so we really don't dwell on it anymore," said Young, who had never played basketball before coming to the United States from the West Indies at the age of 15. "We're just trying to be the shining light for Baylor."