INDIANAPOLIS (AP) -- Baylor now has a basketball team it can celebrate. And what a celebration it was. 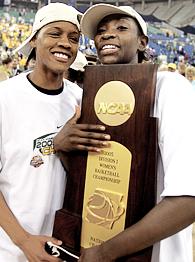 The Lady Bears hugged, flopped on the floor in giddy delight and embraced their coach as a rainbow of neon-colored confetti rained down on the RCA Dome.

All they had wanted was to be a shining light for a university stained by scandal.

One dazzling national championship ought to do.

Sophia Young's 26 points, Emily Niemann's precise 3-point shooting and the brilliant, energetic play of the backcourt carried Baylor to an 84-62 victory over Michigan State on Tuesday night for the school's first NCAA title by a women's team.

"What a team I get to coach!" coach Kim Mulkey-Robertson said. "It wasn't the coaching, it's these guys taking me for a tremendous ride."

And it was a fast one.

Five years after Mulkey-Robertson took over a team that went 7-20 and was last in the Big 12, the Lady Bears were pulling on championship hats after a run through the tournament that included three victories over No. 1 seeds -- North Carolina, LSU and finally the Spartans.

Both teams were playing in the finals for the first time. The margin was the second-largest in a championship game, falling one point short of the record set in 1987 when Tennessee beat Louisiana Tech 67-44.

When the horn sounded Tuesday night, the players jumped in unison amid the streamers and screamed "We won! We won!" as fans chanted "Mul-key! Mul-key!" -- a tribute to a coach who had taken the program to heights never before imagined.

"She doesn't accept anything but the best from her players," Baylor's Steffanie Blackmon said. "She's just hard on you, but it pays off, 'cause hey, we're here and we won the big thing right now."

They did it with unforgiving defense that disrupted almost everything Michigan State tried and by poking enough holes in the Spartans' matchup zone to stay comfortably ahead after zooming to a 19-point lead in the first half. Niemann keyed the arly surge and finished the first half with 15 points on 5-of-7 shooting from behind the 3-point line; she finished with 19.

"I think (Niemann) was the whole key to this game," Michigan State coach Joanne P. McCallie said. "If you take 51 off the floor, it was a different game. She was definitely the X-factor."

Not that the Lady Bears were resting easy after that. Knowing that Michigan State had rallied from 16 down to beat Tennessee two nights before, Baylor kept attacking, making steals and scrambling for loose balls.

The Lady Bears' killer instinct was a perfect reflection of their feisty coach, who practically glowed in a bold aqua blue pantsuit as she stormed back and forth in front of the bench, calling plays, pleading for calls from the officials and cajoling her players to keep pressing -- even with a 20-point lead. 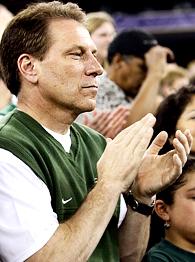 Young was unstoppable in the second half, scoring 18 points. The 6-foot-1 junior, who came to the United States from the West Indies at age 15 and had never played basketball before that, was named the most outstanding player of the Final Four.

"Well, all those moments all just paid off right now," Young said. "This is what I came here for and I'm living my dream."

Young went 10-for-19 from the field, grabbed nine rebounds and had four assists. Blackmon helped out with 14 points in the second half to finish with 22.

The victory completed an unprecedented double for Mulkey-Robertson, who became the first in the women's game to play for a national championship team and then coach one. She was the starting point guard when Louisiana Tech won the first NCAA title in 1982 and later became an assistant coach at Tech, spending 15 years there before taking the Baylor job in 2000.

The Lady Bears (33-3) finished the season with 20 straight victories and helped erase an ugly stain on the university, which was rocked two years ago by a scandal in the men's basketball program that was uncovered after a former player was accused of killing a teammate.

"Look up at these fans," Mulkey-Robertson said. "That's how we changed the Waco community. We're a positive in Waco and at Baylor University. There's a lot of good there, there's great programs, great coaches, and this is one of many more to come."

Michigan State (33-4) had reached the title game with unselfish play that epitomized team basketball. But guards Kristin Haynie and Lindsay Bowen had to do it almost by themselves in this one -- and that was asking too much.

"There was a lack in the post area," Roehrig said. "We really didn't hold our own."

Baylor led by 12 at halftime after blunting a mini-rally by the Spartans at the end of the half. Michigan State hung around for a while early in the second half, giving the Spartan fans -- who included men's coach Tom Izzo and football coach John L. Smith -- hope that another big comeback was possible.

Baylor kept getting the ball to Young and Blackmon for baskets, while guards Chameka Scott and Latoya Wyatt kept harassing Haynie and Bowen. With under seven minutes to play, the lead had grown to 22. Even the Spartans had to feel they were finished by then.

When it was over, McCallie, who engineered a five-year turnaround of her own, managed a bright smile as she shook hands with Mulkey-Robertson, knowing the Spartans had lost to a superior team.

"They're hurting a lot right now, as we all are because the season's over, and it's just a funny feeling to have it be over," McCallie said. "But in the long run, they're going to look back and realize that they were part of the greatest team ever at Michigan State and one of the greatest teams ever."

Baylor frustrated the normally efficient Spartans from the start with its sticky man-to-man defense. The Lady Bears tipped passes, contested shots and often had Michigan State desperately seeking a good look at the basket with the shot clock winding down.

At the other end, the Spartans couldn't find Niemann and she made them pay. Her first two 3s gave Baylor a lead it would never relinquish and her four baskets from long range made it 32-13. Bowen and Haynie then led a 12-run that pulled Michigan State to 34-25.

The momentum was swinging the Spartans' way and then Niemann doused it with an NBA-range 3 from the left side with eight seconds remaining to take the lead back to 12.

It was more of the same after that. Baylor never stopped until it was time to celebrate.