RALEIGH, N.C. -- Elissa Cunane prefers bird-watching to binge-watching. Ask her what her favorite television show is, and the NC State center shrugs. Put her in the great outdoors with a trail to follow, and she's content.

"Growing up, I was always outside," said the 6-foot-5 sophomore, whose Wolfpack are coming off their first ACC women's tournament championship in 29 years. "That's my happy place."

"She gets that from her dad," Elissa's mom, Sharon Cunane, explains. Elissa -- whose name is pronounced "el-EE-sa" -- has Dan Cunane's smile, his height, his gregarious personality and sense of humor, his natural athleticism.

"I used to be 6-4, 250 [pounds], lifted weights, hunted and fished. I wasn't afraid to do anything," Dan Cunane said. "But Elissa doesn't remember me being fully healthy."

In 2002, when Elissa was 2 years old, Dan broke four cervical vertebrae and one thoracic vertebra in a bicycle accident. A Greensboro, North Carolina, policeman then with nearly two decades of service, he was initially totally paralyzed.

As the swelling of his spinal cord subsided, and with extensive physical therapy, Dan got back some use of his feet, legs and arms. His fine motor skills -- such as using his hands -- remain limited, and while he can stand up and sit down, he can't walk on his own.

He worked hard to regain as much as he could, and then learned to adapt to the challenges of a new reality. His family was by his side throughout the journey, and Elissa, from a very early age, gravitated toward helping her dad.

"She would help me make birdhouses. She knows what all the tools are and how to use them," Dan said. "We've got a picture of her on the riding lawnmower when she was like 7 years old. She would go fishing with me, and started doing some hunting. I liked that I was out there doing things, too, even if I was doing a lot of it through her.

"I think it's her helpful spirit. She looks at a situation and sees what needs to be done. You don't have to tell her."

How her father dealt with his injury has impacted the way Cunane approaches everything, including basketball.

"He really helped me with the mental aspect of the game," she said. "One thing he harped on is to control what you can control. He's had that life experience. That's one reason why I enjoy the game of basketball so much. [It's about] focusing on my attitude.

"If the refs are calling what you think is a bad game, or you think the other team is playing a little dirty, you can't control that. You can only control how you respond. That's one of the biggest things I've lived off of my whole life."

Dan and Sharon watched proudly from the stands this past weekend as Elissa helped lead NC State to its first ACC tournament title since 1991. The Wolfpack were ranked as high as No. 4 in early February, but then lost three of four games during a tough stretch of the schedule and entered the postseason feeling they had something to prove.

The team had a dinner last Wednesday at the Cunanes' house in Summerfield, a small town just an hour-and-a-half drive from campus but also located just outside of Greensboro, which has been home to the ACC women's tournament since 2000, the year Elissa was born.

Then the Wolfpack avenged a regular-season loss to Georgia Tech, topped a Boston College team that had upset Duke, and then, in the ACC final, won 71-66 against Florida State, which had eliminated No. 1 seed Louisville. NC State is projected to be a No. 2 seed in the NCAA tournament in the Greenville Regional.

"One thing he harped on is to control what you can control. He's had that life experience. ... You can only control how you respond. That's one of the biggest things I've lived off of my whole life." Elissa Cunane on how her dad had impacted her

Cunane recalled watching previous ACC finals from the stands as a child and wishing she could run onto the court to get one of the balloons from in celebration.

"So today I grabbed as many as I could," Cunane said Sunday after totaling 18 points and nine rebounds, and scoring the Wolfpack's final four points on free throws. "It's amazing to be on this stage and surrounded by all my best friends."

Optimism and gratitude are her go-to emotions. Cunane is known for her sunny disposition -- "My teammates sometimes yell at me in practice saying, 'Stop smiling and beat someone up. Push back!'" -- but she has had to amp up her toughness and aggression.

But she loves every part of playing basketball. Even on those rare days when she initially groans at the thought of getting up early to lift weights, she pauses to think of people, including her father, who wish they had her ease of movement.

"We've had challenges in our lives," Sharon said. "But we've taken it day by day, and continued around anything that is a challenge. Her optimism ... I don't know that we could claim credit for that; she was always a happy child. But I hope she has seen that we've overcome obstacles, and things have turned out all right." 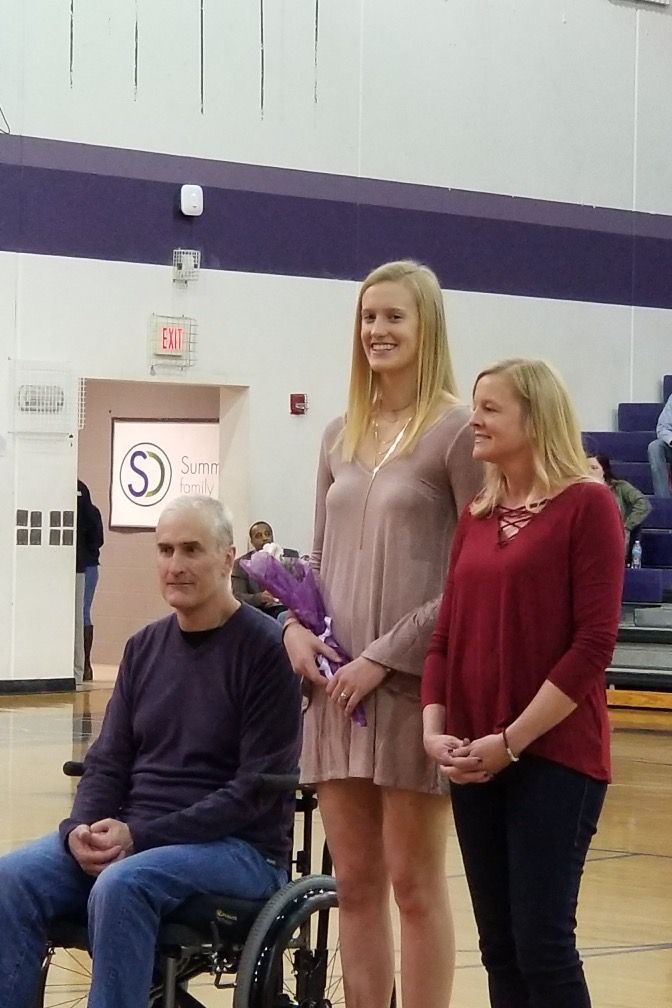 Elissa Cunane with her parents Dan, left, and Sharon.

Dan was injured Dec. 15, 2002, the date of son Will's fifth birthday. Elissa, who'd turned 2 that September, was taking a nap. The family had a party planned for Will and his friends, but first he and Dan played outside. They shot hoops, tossed a football around and then rode bikes.

Dan was on a mountain bike and was used to making small jumps on more difficult terrain. The jump he attempted that day seemed insignificant, but his front wheel hit first, and he flew over the handlebar, landing on his head. He didn't lose consciousness but couldn't move and knew he was badly hurt. Will ran back up a long driveway to tell Sharon to call 911.

Dan didn't return home until 4½ months later after spending time in the hospital and rehabilitation facility. For someone so used to being active and outdoors, and so dedicated to law enforcement, there was a very difficult adjustment period. At first, he couldn't do anything for himself.

"We had one kid in day care, one in kindergarten, and I worked full time," Sharon said. "You just get through the day, and you don't think about, 'What do we have to do tomorrow.'"

Dan has what's called central cord syndrome, which results from an incomplete spinal cord injury and inhibits motion and sensation, particularly in the arms and hands. During the first couple of years after being hurt, Dan got back some key functions. He can move adeptly in his wheelchair, propelled by his feet, and can drive, which allowed him to shuttle Elissa and Will to their various sports events.