Hall of Famer Muffet McGraw is retiring as women's basketball coach at Notre Dame after 33 years, she announced Wednesday.

"It has been my great honor to represent the University of Notre Dame these past 33 years, but the time has come for me to step down as your head basketball coach," McGraw said in a statement.

"... I am grateful to have worked with the best assistant coaches in the business, and I have been blessed to coach so many phenomenal women. To the best fans in the country, it was my honor and privilege to play for you."

McGraw said during a Zoom teleconference call that since the 2018 championship season, she had been approaching her career from a "let's take one more year" perspective. In 2019, the Irish were national runners-up. However, after losing five players to the WNBA draft, Notre Dame had a 13-18 record in 2019-20.

"We have a great recruiting class coming in," McGraw said. "I think the program is right back where it should be and poised to make another run to the Final Four. So I feel like I'm leaving the program in a good place. And also a chance for me to do something else."

McGraw went 848-252 at Notre Dame and led the school to national championships in 2001 and 2018. The Fighting Irish won 67 NCAA tournament games and have made 24 consecutive NCAA tournament appearances under McGraw.

While McGraw is stepping away from the court, she said she would remain active within the university and local communities.

"This is a retirement from coaching," McGraw said. "I am excited about the opportunity to continue to promote women's equality and to speak on behalf of all women across the country. And to use my platform in any way I can. I'd like to get more involved in community work. I find I've turned into a real activist, and I'm really enjoying that. I hope a lot of things are in store, and definitely a different page than I've been on."

McGraw said forced time away from her normal coaching routine because of the coronavirus pandemic also gave her time to reflect.

"Tomorrow is promised to no one," McGraw said. "What is your life going to look like down the road? We wanted to continue to enjoy it. I'm excited about knowing that I can handle not having basketball in my life."

She is one of just five NCAA Division I men's and women's basketball coaches with at least 930 wins, nine Final Fours and multiple titles. The others are Pat Summitt, Tara VanDerveer, Geno Auriemma and Duke men's coach Mike Krzyzewski. 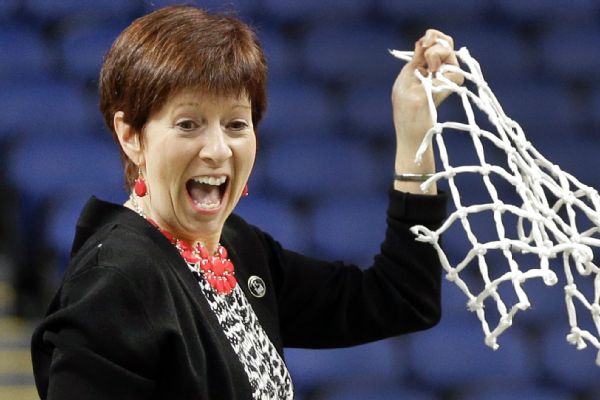 UConn coach Geno Auriemma: "It was a real surprise when I found out Muffet was retiring, as I'm sure it was to a lot of people. She leaves behind a great legacy of coaching, winning and competing that translated into a Hall of Fame career. We're going to miss the competition and we're going to miss the impact she had on our game. Congratulations to Muffet on a tremendous career. We had some memorable moments that will live forever in the history of women's basketball."

Baylor coach Kim Mulkey: "I have much respect for her as a wife, mother and a coach. She is a Hall of Fame coach who has achieved it all in her career."

UNC coach Courtney Banghart: "Muffet has meant so much to our game for as long as I can remember. As a woman, a mom, a leader, and a national champion, she was someone so many could look up to. ... She cemented her legacy with how much she gave always back to the game and wanted more opportunities for young coaches to get into it."

Ruth Riley, who made the winning free throws for Notre Dame in the 2001 national title game: "Muffet is a pioneer, a trailblazer, a fierce competitor, a champion, a leader and an advocate for women's empowerment and equality. Her sustained success over decades has etched an incredible legacy in the archives of sport. It has elevated Notre Dame to one of the elite programs in the country, and I will forever be grateful for the privilege to have played for her."

Digger Phelps: "What Knute Rockne did for Notre Dame football, @MuffetMcGraw did for @ndwbb. Not just a national power but more importantly part of mystique and traditions of our great university."

WNBA commissioner Cathy Engelbert: "Coach McGraw is a giant in the game of women's basketball. She has coached and mentored thousands of young basketball players throughout her career, including me at Lehigh University. She also developed many elite players who have gone on to become transcendent stars in the WNBA and impacted countless players and people around the world through her empowering messages. I look forward to seeing the impact Muffet will continue to have as she embarks on her next chapter.''

Under McGraw, Notre Dame had one of the great rivalries in college sports against UConn. The teams met 51 times, with eight of those in the NCAA tournament. The Huskies lead the series 38-13 and won the two national championship games in which they played (2013 and 2015). Notre Dame beat UConn five times in the national semifinals, including both years the Irish won the NCAA title.

The rivalry between her and Auriemma got heated a few times, but McGraw said it'll be one of the things she'll miss most.

Notre Dame athletic director Jack Swarbrick said he wants McGraw to continue to be heavily involved with the university.

"This is a great teacher, and we want to create platforms for her to teach," Swarbrick said. "We have some specific ideas about programs which are being developed at the university. We want her to help our coaches. And we'd like to have her continue to represent the university publicly."

McGraw sent 20 players to the WNBA during her coaching career, including Skylar Diggins-Smith, Kayla McBride, Arike Ogunbowale and Ruth Riley.

"There's something about her that makes you want to move a mountain for her. I believe it's how much she cares about her players," Diggins-Smith said.

Before coming to Notre Dame, McGraw got her start as an assistant at her alma mater, Saint Joseph's, before taking over as head coach at Lehigh in 1982. She left for the Irish after the 1987 season.

Ivey has made nine Final Four appearances with Notre Dame -- two as a player and seven as an assistant coach.

"I am so honored to be able to follow in the legacy that Coach McGraw built here at Notre Dame," Ivey said in a statement. "My love and appreciation for Coach McGraw is beyond anything I can express. She's more than a mentor, more than a friend, she's one of the most influential people in my life.

"I am full of gratitude for Coach McGraw and what she has done for me. She was the first to give me an opportunity to play for Notre Dame and coach here as well. I will forever be grateful for her love and support. I would also like to thank Jack Swarbrick and [Notre Dame president] Father [John] Jenkins for having the faith to move this program forward with me. I can never thank you enough for this incredible opportunity."

As far as her favorite memory, McGraw said it was probably the 2018 NCAA title, which the Irish won in a season in which they'd dealt with four ACL injuries. They defeated UConn in overtime in the semifinals on Ogunbowale's game-winning shot. Then Ogunbowale hit another winner in the final against Mississippi State.

"You learn so much more through adversity," McGraw said. "The biggest thing I've learned is never be too high or too low. And you have to appreciate the moment. I really had a hard time with that. We'd win a game, and I'd immediately be focused on the next one. I'd continually talk to the team about, 'We've got to celebrate the victories.' And I wasn't as good at doing that. But I'm happy about where I've left things."