We released our top 100 women's college basketball prospect rankings in the Class of 2021 in early September, a list headlined by guard Azzi Fudd.

Each of those classes is rich in talent and has players with vast potential who can impact the women's college basketball landscape in the years to come. But which players stand out the most as of right now? Here are the players to keep an eye on in each class.

Size is a coveted premium in basketball, and the 6-foot-7 Betts has that. Couple that with her current talent and vast potential, and she is the top-ranked prospect in the Class of 2022.

Defensively, her height and wingspan give her a chance to block -- or at least impact -- any shot within an 8-to-10-foott radius. She has improved her footwork and technique, gained strength and also learned how to foul less.

Offensively, she has developed considerably over the past year. Betts is finishing her shots better, rebounding more and extending her soft touch out to the top of the key. She understands the timing of the high-low game as a passer and is better at playing out of the double team.

Barker is arguably the most naturally talented player in this class. She has been a skilled and smooth operator since she first burst on the scene. At 6-3, she has the frame and size to play the game for a long time.

Over the course of the last year, she has separated herself from the rest of the pack. Not only can she put the ball on the deck and play out of change of direction moves, but she can also catch opponents for an advantageous post up, pull up for a nice midrange jumper and attack the offensive glass.

On the defensive end, Barker is mobile enough to guard essentially anyone on the floor, a huge advantage now that there is so much switching and spacing in the game.

Much like her 2022 classmates mentioned above, Patterson has an elite combination of speed and jumping. Two months ago, she showcased that with a two-handed dunk after only a couple of approach dribbles.

Beyond that, Patterson has refined her skills and played more consistently. She plays well off the dribble to create her own shot and is almost impossible to guard in transition. The 6-3 Patterson has added a nice pull-up jumper and become a threat out to the 3-point line as well. That adds to her versatility, as she has a nice post-up game, too.

Defensively, she is a terror on the glass and is a great shot-blocker with her length and quick-jump ability, whether from the weak side or as the primary defender.

Patterson's recruitment is wide open but includes schools such as UConn, Notre Dame, South Carolina, Louisville, Texas, Maryland and Baylor, among others.

What makes Gardiner stand out is the poise she has displayed ever since she was a young player competing against people 3-5 years older. She plays within herself, which keeps her from playing too fast, and at 6-3 she rarely gets physically overmatched.

Gardiner is a confident ball handler who can control elements of the offense with her decision making and strong fundamentals. She has always battled on the boards and picks up defensive schemes very well.

She is immensely talented with a true jumper, and her potential to play at a high level for years to come is evident.

Stanford, Notre Dame, Arizona State, Oregon, Oregon State and UCLA are the finalists for her recruitment.

Watkins' talent is undeniable. She has a smoothness to her game and a clear confidence on the court. She can score as well as anybody in the 2023 class and beyond thanks to her elite finishing abilities.

A 6-foot guard, Watkins knows how to use her body to keep defenders at bay. She plays for former Stanford star Vanessa Nygaard, who will only help Watkins refine her game as she enters her sophomore season.

As Watkins learns the nuances on the defensive end and becomes more consistent along the perimeter, she could become the complete package. She has a strong instinct for the game, something that separates her from the rest. Teams from each major conference are pursuing her.

Del Rosario is a highly coveted 6-6 post player in the 2023 class, and it isn't just because there seem to be fewer true post players these days. She has a soft touch around the rim, passes the ball well, makes strong and aggressive post moves, and displays a solid understanding of the game as she navigates double teams and different zone defenses.

She made the leap to high school hoops as an eighth grader and has steadily improved over time. Her response to coaching helps her stand out. She is very receptive to feedback and shows a willingness to develop her game as much as she can.

Usually when a young player plays with a lot of flair, they can lack fundamentals. That is not the case with Fulwiley. She dances through defenses with pristine footwork, as well as strong ballhandling and change-of-pace abilities. Combine that with her court vision and passing skills, and she is an elite prospect.

Not only can the 5-8 Fulwiley cross a defender and drop a dime, but she can also be patient enough to feed the post on the block. She is also skilled enough to freeze a post defender in a pick-and-roll scenario and hit the roller with a pocket pass for an easy layup.

Over time, her jumper has improved out to the 3-point line, and she finishes with contact against the best of them. Recently, she had it all on display at the famed Rucker Park in New York City. Defensively, she is smart and is now learning off-the-ball techniques that will only enhance her presence on the floor.

Wagner was extended an offer from Baylor coach Kim Mulkey relatively early, and she accepted it. That should indicate a lot about not just how talented Wagner is, but also about her intangibles. From her high school to her club team to USA Basketball trials to the prestigious camps to which she has been invited, Wagner possesses a unique confidence to her game. 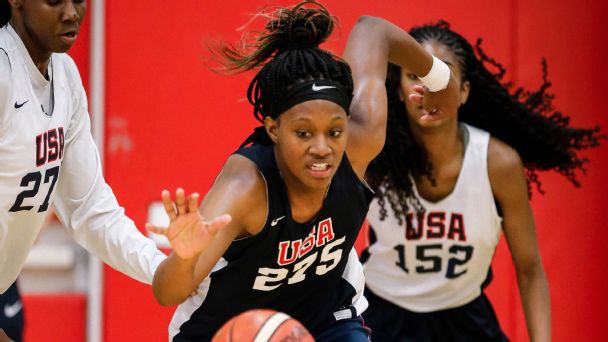 She is a versatile 6-1 forward who could turn into more of a "point-forward" over time. She can stretch the floor out to the 3-point line with her ability to knock down triples. She has the frame and the strength to post up and battle inside for boards on both ends of the floor.

Defensively is where her competitiveness shines. She is often tasked with covering perimeter players and sometimes even bigs within the same game (or even the same possession). And she does not back down.

Dudley is in the discussion as the best player currently in the 2024 class. The 6-1 wing is already a unique combination of size and skill, and she has a maturity and poise to her game that separates her from many other players entering their freshman season. Dudley can finish above or through defenses, has a natural pull-up jumper, shoots the 3-ball well and distributes the ball effectively to teammates.

Edwards competed among older players all summer to sharpen her skills and challenge her motor, and she was up for the task on some big stages, including when she took the court at Rucker Park earlier this month. The 6-2 Edwards is a natural when it comes to rebounding and possesses a high upside to her game.

The 5-7 McMiller is a dynamic point guard at such a young age. She has a creativity to her game that sets up defenders for failure because they can't keep up with her. She is a feisty on-ball defender as well and plays very well in transition. McMiller has the confidence and the ability to take over any game when she needs to.

Parker has a motor that is hard to compare in the entire country, and her drive is endless. She, too, has competed against older and more experienced players during the summer. The 6-1 Parker is a relentless defender with the offensive skills to balance out things. Her jumper is sweet and she can rack it better than most.