Westlake High School (GA) won GEICO Nationals last month, but there is still some high school basketball being played in California right now, as the COVID-19 pandemic impacted high school sports all across the country.

Things aren't completely back to normal, but club basketball is being played each weekend throughout the nation.

Now that it has been possible to see women's college basketball prospects compete at high-level events, it's time to update the rankings for the Classes of 2022, 2023 and 2024. Each class has seen its fair share of movement, and several prospects have seen their stocks rise tremendously.

Here are three players from each class that rose up the rankings and took their games to new heights.

The 5-foot-10 guard is quick, fast and aggressive. She burst on the scene as a younger player and stood out with her energy and intensity. Over time, she has incrementally improved all aspects of her game. She has grown from a combo guard always on the attack to being able to run the team as a point guard. She is known for her meticulous player development training as well as being a track athlete. 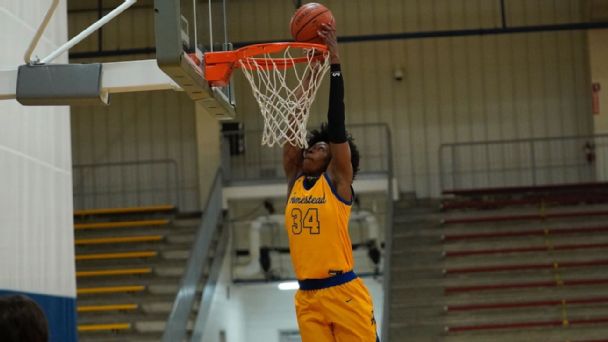 Ayanna Patterson, the No. 3 rising senior, is among the top recruits in women's college basketball. Who are the other top prospects in the country? Class of 2022 » Class of 2023 » Class of 2024 »

Gray is a knock-down shooter with major range and can hit the deep 3 off the dribble or in catch-and-shoot situations. Her elite speed allows her to keep defenses guessing with her ability to change tempos in small space and then either attack for the pull-up jumper or get to the rim after a hesitation move.

Defensively, she pressures the ball with the best of them. She leads with her competitive example and is relentless on the court. Her recruitment is intense; Arizona, Michigan, North Carolina, Ohio State, Oregon and UCLA are in heavy pursuit.

Jackson, a Duke commit, came onto the scene early with her exceptional range. She is a 6-foot point guard with knock-down 3-point shooting ability both on the catch and off the bounce. Over time, she has developed into a true floor general for her ability to stretch the court and distribute the basketball.

Jackson's handle allows her to create space and play out of the ball screen patiently as she makes the correct reads. She has improved her pull-up jumper, which makes her a serious threat in those situations. Her biggest asset may be her leadership intangibles, as she has brought Hardin-Jefferson to three consecutive state tournament appearances.

Defensively, Jackson's size makes it harder for opponents to find passing angles. She is the eyes and ears on the floor for her team, and that communication proves valuable when she is off the ball in help situations. She can rebound on the defensive end and immediately begin the fast break.

Stines' game always had a strong foundation of fundamentals, even before she transferred from Troy High School to Orangewood Academy. She is a playmaker who knows how to get the ball inside and is a leader who makes her teammates better. She is poised on the floor, even against heavy defensive pressure.

The 5-10 Stines sees the floor extremely well and is effective off of pin down screens and staggered screens, as well as out of the pick-and-roll. Early on, her perimeter shooting needed to be more consistent. Her consistency and her range are no longer in question; she proved that at Boo Williams against a competitive schedule.

Defensively, Stines understands angles well and uses her frame and length to pressure the basketball. Off the ball, she is crafty and intelligent, and she navigates screens and defends cuts very soundly. Pac-12 schools like Colorado, Stanford, Utah and Washington are among the teams recruiting her.

Williams moved up five spots from inside the top 10 to No. 3. The Louisiana native recently had an outstanding performance at the Heart of Texas Showcase. Playing among many of the national elite, Williams led her club team, Ed Durham's Mavs Elite Strong, to an undefeated showing. She is a multi-sport athlete who also plays softball and is on the track team for her high school.

A 6-foot guard with elite speed and strength, Williams is a complete player with strong fundamentals on both ends of the floor. She can create for herself at any moment, but is unselfish and takes pride in making the correct pass. Williams is not a true knockdown 3-point shooter yet, but has easy 3-ball range and a smooth release that will only improve percentage-wise with continued reps.

Williams is an excellent and versatile perimeter defender who has steadily improved as a communicator on that end. She pressures the ball well, is a force in the passing lanes and can quickly turn an errant pass into two points on the other end. Nearly every top program in the country is recruiting her, though she and her family prefer to keep the specifics private.

Shade is the biggest stock riser in the 2023 class. A physically strong guard with major elevation on her jumper, the 5-10 Shade can catch fire both from 3 and in her exceptional pull-up game inside the arc. She can attack off the ball screen in drag action or when she is isolated at the top of the key.

She has a knack for creating space and finding an opportunity to get her shot off. She is quick and has a versatile handle to complement her shooting. Shade sets the tone competitively for her teams. Her outstanding conditioning allows her to get after opponents on the defensive end with ball pressure, communication and passing lane pressure.

Dew has spent most of her young career as a frontcourt player, but despite the fact Centennial did not officially play a high school season, she improved her ability to create off the bounce and improve her 3-point accuracy. With her added perimeter game, she can also score with her back to the basket and in face-up opportunities.

Her game has evolved to where she can play some point-forward, and she has displayed that during the club season thus far. She has always been one to make the right play for teammates, but now she has added an aggressiveness and toughness to her game that has added another dynamic to her impact on the floor.

At 6-2, Dew impacts the game in a variety of ways. She is a strong rebounder and can guard multiple positions on the defensive end. Her game has a high ceiling and she is still coming into her own as a player. Dew has offers from schools like Louisville, Kentucky, Arizona, UCLA and Virginia.

Strong's talent was immediately evident on film. Simply put, she has all the tools. At 6-2 and physically strong, she has a smooth stroke from the 3-point line, including the pull up from the 3 off the dribble.

At her size, the most impressive thing may be her handle and how she sees the floor. She is very comfortable dribbling the ball and making decisions. Strong can rebound, lead the break and make the right reads.

Like other supremely talented young players, her motor could be a bit better. She has the potential to dominate both ends of the floor as she grows in her game and increases her intensity level. So far, her recruitment includes offers and interest from major conference schools.

Lee has come onto the national scene this spring with supreme confidence while playing for her club team, Jason Kidd Select. A versatile 5-11 wing, Lee has the ability to score inside or out. She is a knockdown 3-ball shooter off the catch who has nice one- and two-dribble moves before she pulls up with fluid elevation into her shot.

Lee currently averages 18 points and four rebounds per game as a freshman in high school. She is a good rebounder and active wing defender. With her length, Lee tallies multiple deflections per game defensively. She uses her activity to create transition opportunities for both herself and others.

She has picked up offers from Arizona, Cal, Ohio State and Cincinnati and is being recruited by numerous other programs.

Randolph's name is no surprise to those in the basketball circle. Her father, Zach Randolph, was a two-time NBA All-Star and played 18 years in the league. She is currently averaging 21.6 points and 12.9 rebounds with a 60.5% FG percentage in her freshman high school season.

She has a major motor at the forward spot and outcompetes opponents on the glass. At 6-feet, she brings a blue-collar approach and has a poise and patience to her game that is outstanding for such a young player. Randolph brings a toughness and maturity to the floor that makes her really stand out.

She has a nice touch, and her feel and footwork around the paint in terms of face-up game are excellent. She currently has offers from Louisville and Arizona.