You already have heard and will continue to hear a lot about the dismal situation at Penn State. It's spotlighting an apparent breakdown in responsibility and leadership at all levels in regard to alleged crimes of child sex abuse by former football assistant coach Jerry Sandusky.

Since the news broke Saturday about the arrest of Sandusky and indictments against Penn State athletic director Tim Curley and senior vice president Gary Schultz for perjury and failure to properly report abuse, we've seen an understandably growing wave of contempt and disgust for those involved -- even from passionate alumni who love Penn State.

Now football coach Joe Paterno and university president Graham Spanier are out of their jobs, with more upheaval surely on the way. People are asking about the dearth of leadership in State College, and how it could have come to this.

For those who follow women's college basketball, though, it brings up memories of how the school's administration handled the long tenure of coach Rene Portland and the lawsuit that essentially ended her career.

I don't want to pile on Penn State, knowing the majority of people there and the alums are totally aghast at the current disaster. Nor do I want to equate what happened with the women's basketball program under Portland to what apparently happened with the football program. As reprehensible as many found the things that Portland did and said in regard to lesbian (or perceived lesbian) student-athletes, what Sandusky is alleged to have done is in its own isolated dungeon of horrific crime. 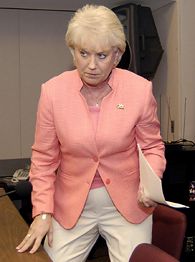 But the situations are linked in this way: The leadership at Penn State was lacking, and many of the same key people -- such as Curley and Spanier -- were involved. I wrote several columns for ESPN.com in 2005-07, when a discrimination lawsuit brought by former Penn State basketball player Jennifer Harris against Portland and Curley put a spotlight on the coach's perceived attitude toward players who were lesbian or who did not dress/act in what Portland considered an appropriately heterosexual way.

Again and again in those columns, I kept referring to the leadership void in the Penn State athletic department. During that time, in fact, Penn State communicated to the media a lot through an official spokesman who told me that -- despite being on the front line of protecting the reputation of the school and the coach -- he had never even met Portland.

Thus, it was no surprise that he repeatedly gave statements that made it painfully obvious he was largely unfamiliar with her career or any prior controversies in which she'd been involved. He was unaware that when the university's faculty senate had added a sexual-orientation clause to its anti-discrimination policy in 1991, it was in response to a story printed 11 days earlier in The Philadelphia Inquirer that quoted former Penn State players who alleged Portland discriminated against lesbians in recruiting.

To me, the almost casual way Penn State handled its defense and support of Portland throughout her career signaled that the school didn't take any allegations against her very seriously. What I wrote in October 2006 reflected the frustration many outside observers had about the school's attitude regarding complaints about Portland: It took a quarter-century of people not speaking out, or looking the other way, or rationalizing that led to Portland having complete belief in her dictatorial power.

Obviously, we've seen many examples of college "leadership" turning a blind eye to athletic department malfeasance and acting only after being embarrassed and exposed publicly. So this isn't just about Penn State but the overall problem of power being out of balance at universities across the country.

However, in the case of Penn State, what happened with Portland went on for several years. During that time, many who followed women's basketball considered Penn State a toxic part of the sport because of Portland and the administration that backed her.

In 1980, Portland was hired as Penn State's women's basketball coach by Paterno during the brief time he was also the school's athletic director. In newspaper articles in 1986 and 1991, Portland's policy of not wanting lesbian players on the team was made public. As mentioned, in '91, the school's faculty senate reacted by adding sexual orientation to the anti-discrimination policy the school already had.

Portland went through what was called "sensitivity training" about homophobia and subsequently refused to address the issue, save for saying she followed the school's policy. Years went by.