Editor's note: This flashback to Pat Summitt's career was originally published in April 2012, when the Tennessee coaching legend stepped down as the Lady Vols' head coach. Some records might have been broken since.

Some say the road to Pat Summitt's success all began 38 years ago, when she took over Tennessee in September 1974, then co-captained Team USA to a silver medal at the 1976 Olympics. Others argue that Summitt truly broke onto the national scene in the '80s, when she coached the USA to its first gold medal in women's basketball in Olympic competition (1984) and won her first two NCAA titles. 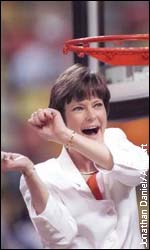 Either way, Summitt ensured her legendary status in the 1990s, when she won four national championships, including a then-unprecedented three consecutive from 1996-98 and a perfect 39-0 run to cap the three-peat. In 2008, Summitt led the Lady Vols to their eighth national championship and NCAA-record 18th Final Four.

Summitt, who is the winningest Division I coach in men's and women's basketball and ranks second only to legendary UCLA coach Wooden for the most NCAA titles, has produced 20 30-plus win seasons, 16 SEC regular-season and 16 SEC tournament championships. Her teams appeared in 13 national championship games and are the only program to compete in every NCAA tournament since its inception in 1982.

Here's a look at some of the bigger moments from the 59-year-old's career in Knoxville, Tenn.

Jan. 10, 1975: Summitt, 22, wins her first game as a coach at the collegiate level, a 69-32 victory over Middle Tennessee in Tennessee's Alumni Gym in front of 53 spectators. Gerald Ford is the president, gas costs 36 cents a gallon, the No. 1 television show is "All in the Family" and the Steelers were once again playing in the big game -- Super Bowl IX.

March 29, 1987: The Lady Vols win their first NCAA title, beating Louisiana Tech 67-44 at the Erwin Events Center on the University of Texas campus.

March 30, 1997: Despite losing 10 games on the season, the Lady Vols upset Old Dominion 68-59 in Cincinnati for the program's fifth national championship.

Feb. 2, 2000: Tennessee beats top-ranked Connecticut 72-71 on the road. The Lady Vols' victory would be UConn's only loss during the Huskies' NCAA title run.

March 5, 2000: Tennessee rallies for a 70-67 win over Mississippi State in the SEC championship game to claim an unprecedented third consecutive conference tournament title and 10th overall.

March 31, 2000: The Lady Vols beat Rutgers 64-54 at the Final Four to advance to what was then an NCAA-record ninth national championship game.

Oct. 13, 2000: In a class that includes Isiah Thomas and Bob McAdoo, Summitt is inducted into the Basketball Hall of Fame in Springfield, Mass., the first time she was eligible for the Hall's ballot. Summitt was just the fourth women's basketball coach to earn Hall of Fame honors.

Feb. 1, 2001: In one of the top games in the storied rivalry with Connecticut, Summitt earns win No. 750 with a 92-88 victory over the Huskies in Thompson-Boling Arena.

March 25, 2002: With a 69-63 win over Vanderbilt in the Midwest Regional final, Summitt earns her 13th Final Four appearance to surpass John Wooden. The 788th win also ties Summitt with Texas coach Jody Conradt for most wins among women's basketball coaches.

Feb. 29, 2004: With an 85-62 victory over LSU, Tennessee wraps up an unprecedented seventh consecutive SEC regular-season championship -- with a perfect 14-0 record.

March 6, 2005: After failing to win at least a share of the SEC regular-season title for the first time since 1997, the fifth-ranked Lady Vols upset No. 1 LSU 67-65 in the SEC tournament final for Summitt's first conference tourney crown in five seasons.

March 22, 2005: In the second round of the NCAA tournament, Summitt surpasses former North Carolina men's coach Dean Smith as the all-time winningest coach in college basketball history with victory No. 880. In a surprise postgame ceremony that included Summitt's mother, Hazel Head, the court at Thompson-Boling Arena is christened "The Summitt."

April 3, 2007: Twenty years after winning her first title (and nine years since her last), Summitt picks up championship No. 7. After overcoming a 12-point deficit over the final 8:18 to beat North Carolina in the Final Four, Tennessee tops Rutgers 59-46 in the NCAA title game.

March 25, 2008: Tennessee routs Purdue 78-52 in the second round to give Summitt the distinction of being the first coach in Division I basketball -- men's or women's -- to win 100 NCAA tournament games.

April 8, 2008: Win No. 983 is also Summitt's eighth NCAA crown, as the Lady Vols avenge their only two losses of the season at the Final Four. After beating LSU on a buzzer-beater in the semis, Tennessee beat heavily favored Stanford, 64-48, in Summitt's 13th appearance in the NCAA title game.

March 7, 2010: A year after losing its NCAA tournament opener for the first time in program history, Tennessee beats Kentucky 70-62 to its first sweep of the of the SEC's regular-season and tournament championships in 10 years. As her players were cutting down their championship nets, Summitt grabbed the microphone and belted out "Rocky Top." Said Summitt: "I did that for the fans. I know I don't have a great voice, but our fans love 'Rocky Top.'" Tennessee gets a No. 1 seed a week later before falling in the Sweet 16.

March 6, 2011: Summitt sings again. The Lady Vols again double up on SEC titles, but this run is all the more special as it's just the third time -- and first since 1997-98 -- that Tennessee goes undefeated in SEC play. The 90-65 win over Kentucky gives the Lady Vols their first back-to-back SEC tournament titles since 2005-06. Tennessee hits a single-game SEC tournament- and school-record 16 3-pointers in the SEC final.

Dec. 5, 2011: Sports Illustrated names Summitt its Sportswoman of the Year. Mike Krzyzewski, the Sportsman of the Year, and Summitt are the NCAA's all-time winningest men's and women's basketball coaches. They join an elite group of sports immortals, including Muhammad Ali, Arthur Ashe, Michael Jordan, Billie Jean King, Jack Nicklaus and Bobby Orr, as recipients of the honor.

Dec. 6, 2011: The NCAA announces that Summitt is the recipient of the 2012 NCAA President's Gerald R. Ford Award, which honors an individual who has provided significant leadership as an advocate for intercollegiate athletics over the course of their career. "Pat embraces student-athlete success in all aspects of college life and models the behaviors that help young people become great citizens and leaders after their playing days have ended," NCAA President Mark Emmert said. "Her commitment to excellence both in molding championship teams and developing the individuals who play the game is beyond compare."

March 24, 2012: Summitt wins her final game, 84-73, as second-seeded Tennessee beats Kansas in the Sweet 16. It's the first time in the 2011-12 season that the Lady Vols trail at the break but come back to win. Summitt's 112 NCAA tournament wins is more than any other women's coach. Two days later, Tennessee falls to eventual NCAA champion Baylor, giving Summitt a 1,098-208 career coaching record.