From the all-ACC right side of the bracket comes North Carolina and Syracuse, just like we all imagined. Or not. The Tar Heels might have been Final Four picks since October, but few saw Syracuse taking down No. 1 Virginia -- as even Orange coach Jim Boeheim admitted after the game. UNC and Syracuse played twice in the regular season, with the Tar Heels winning both, but there are few teams in the nation that would relish the chance to face Syracuse after this tournament run. On paper, the Tar Heels are the far better team -- first in the nation in 2-point attempts and makes; second in the nation in rebounds and offensive efficiency -- but as we've seen, Boeheim's escape artists have plenty of experience coming from behind. 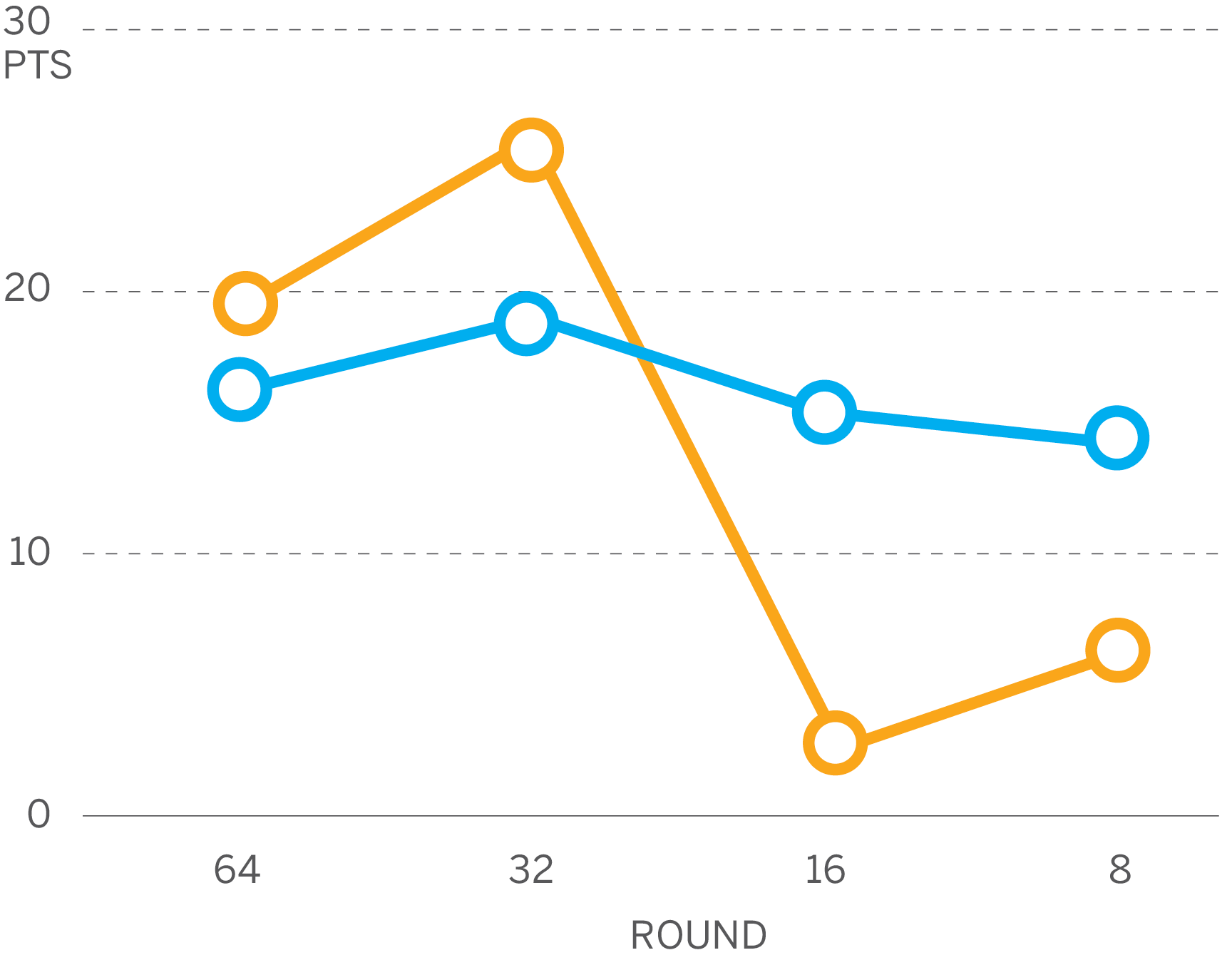 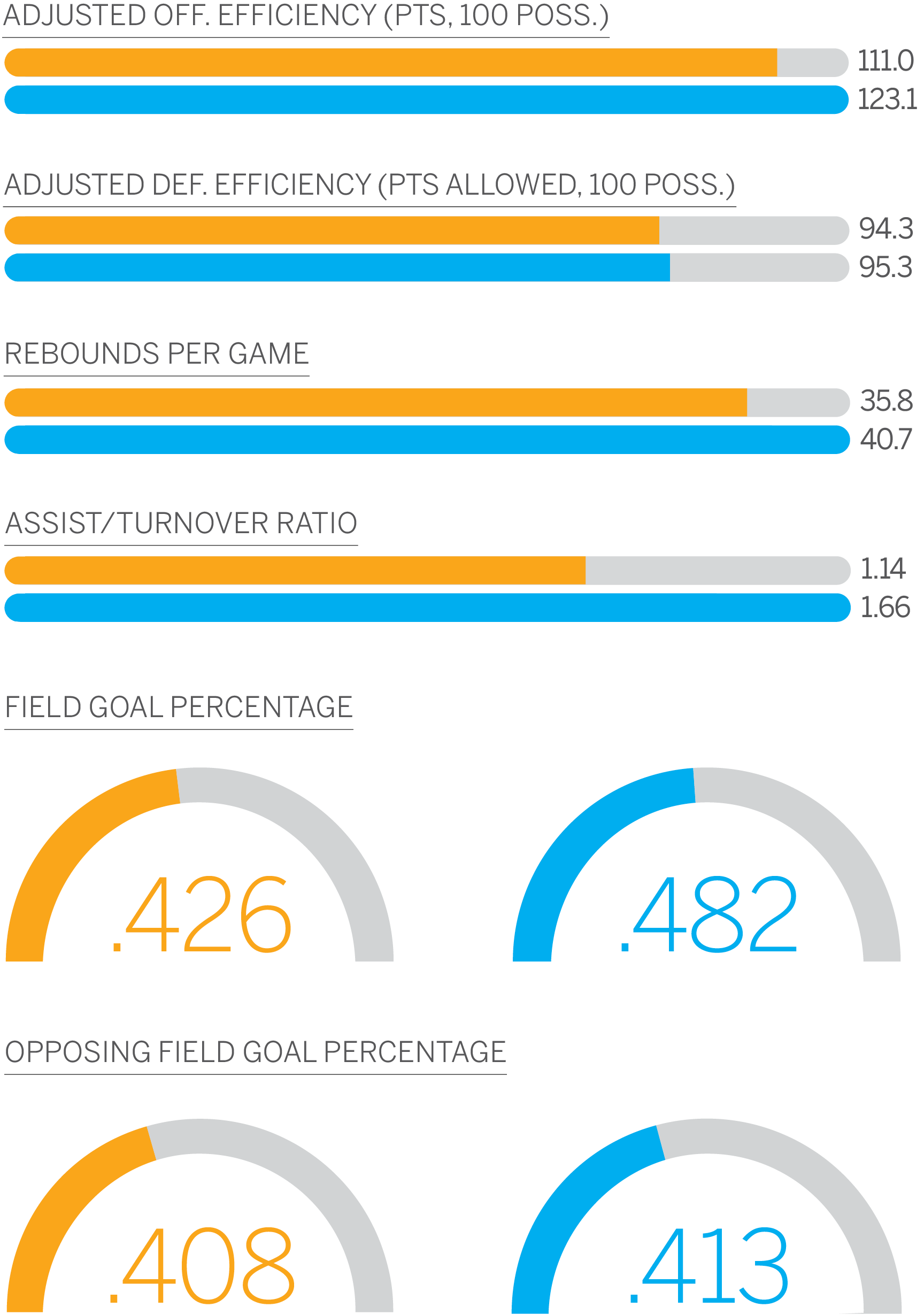 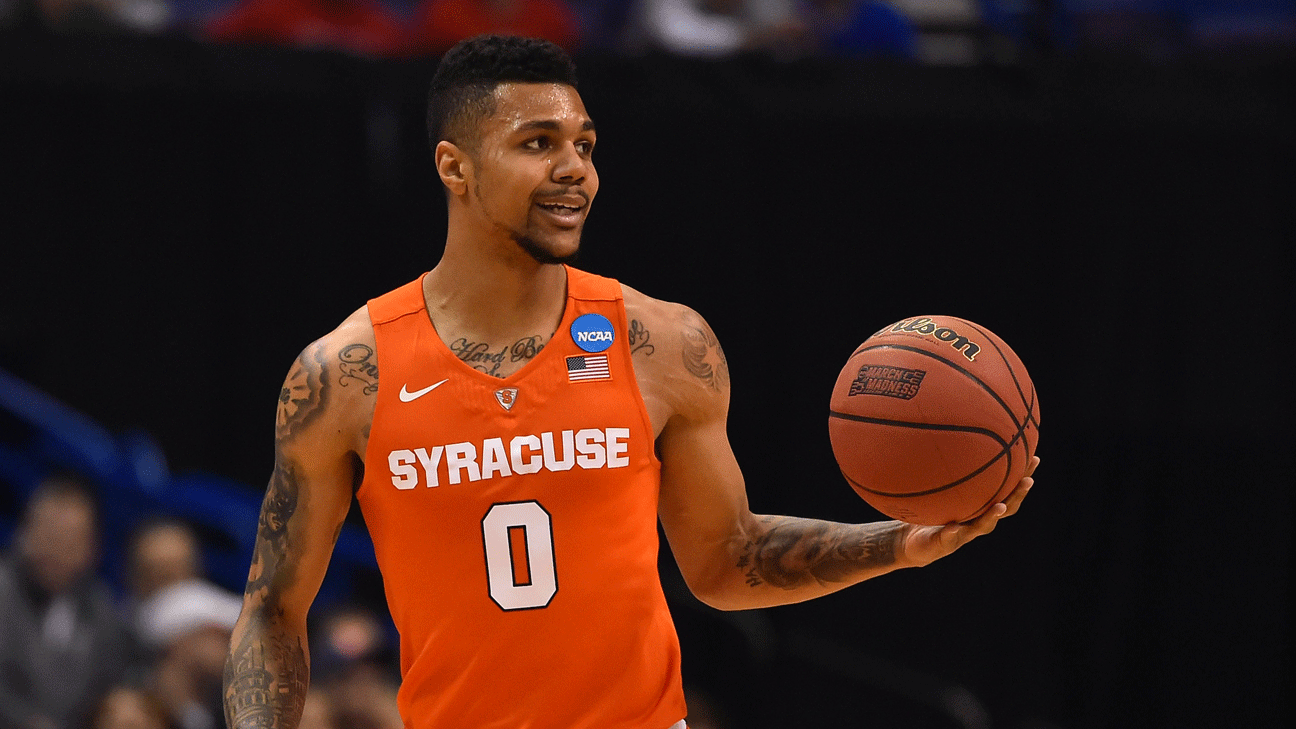 G Michael Gbinije, Syracuse So many times this tournament, Syracuse's chances have seemed close to dead -- starting, of course, on Selection Sunday, when many doubted the Orange would even make the field. Then, down nine to Gonzaga late in the second half. Down 16 to No. 1 seed Virginia. Enter Michael Gbinije: a go-ahead layup against Gonzaga; an 11-point, six-assist, two-steal performance against Virginia. None of it comes as any surprise to his teammates: This season the senior is averaging 17.8 points, 4.1 rebounds and 4.3 assists per game, and led the ACC in steals (1.9). Now Gbinije and his teammates will take that talent to Houston -- and, just maybe, shock the world once again. 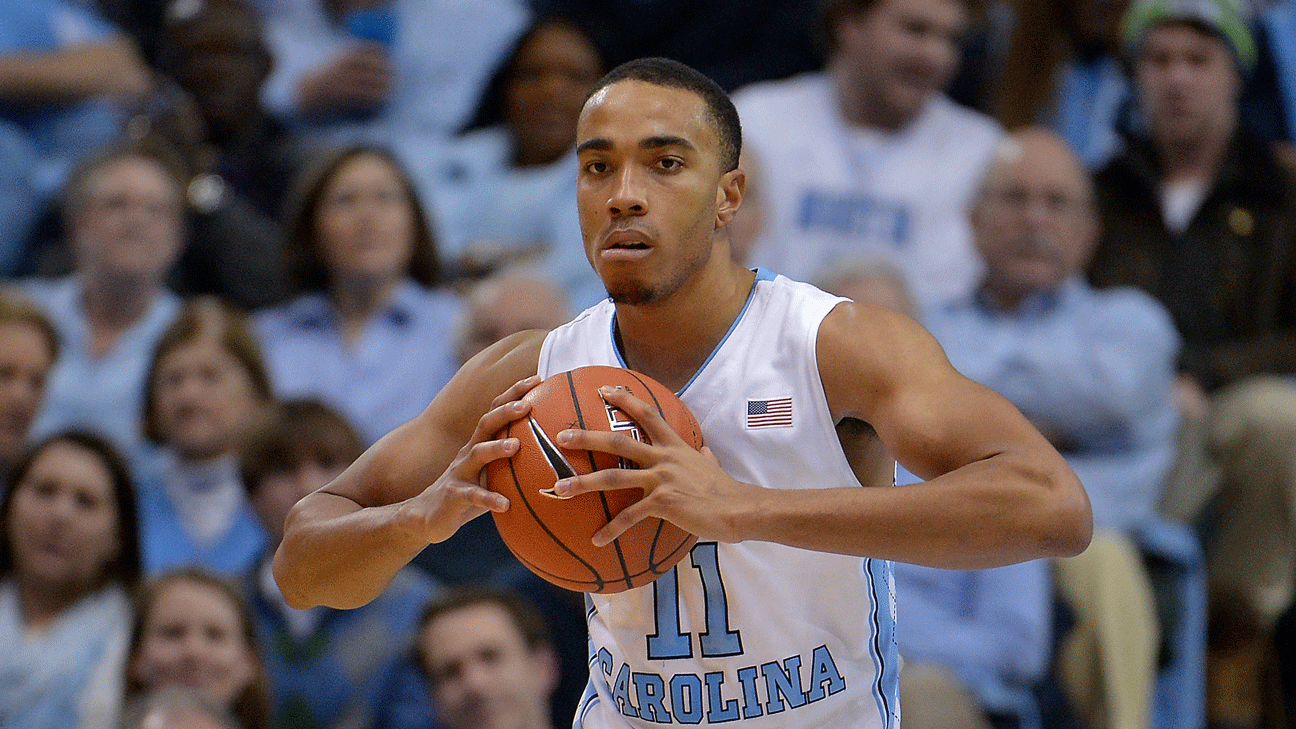 F Brice Johnson, North Carolina Back in October, Marcus Paige was getting all the accolades as the ACC preseason POY pick, and Brice Johnson was one of the lowest vote-getters on the second team. Now, Johnson is the All-ACC Tar Heel, one of only two unanimous selections (on the first team, thank you very much). That's what a breakout season -- in which the senior averaged 16.8 points and 10.5 rebounds per game -- will do, especially when it's for a team that was considered a lock for the Final Four way back in the preseason. Johnson's double-double against Notre Dame was his 23rd this season, setting a new Tar Heel record. If he records a few more in Houston, the Tar Heels will be hard to beat.

In the first half against Virginia, Malachi Richardson shot 0-5 with three turnovers. In the second half, Richardson scored 21 of his 23 points on 6-11 shooting and no turnovers.

In four games against ACC teams in the ACC and NCAA tournaments this year, the Tar Heels outscored their opponents by 66 points. In two games against Syracuse during the regular season, UNC won by a combined 16.

Much will be made over the next six days of Oklahoma's 78-55 win against Villanova in December, but don't let that poor showing lessen your expectations for this matchup. This showdown of No. 2 seeds could be one for the ages, with Oklahoma's Buddy Hield and that cast of strong shooters coming against Villanova's under-the-radar core. For every 3-pointer Hield connects on, Nova senior Ryan Arcidiacono (and his 58 percent success rate beyond the arc this tourney) will be there to answer. Jordan Woodard is averaging 16.8 points per game in the tournament -- Kris Jenkins is averaging 15.3. Villanova has plenty of work to do to shut down the Sooners' scorers (81.0 PPG, 22nd in the nation), but this defense -- which held Kansas to a season-low 59 points and allows just 63.6 points per game (15th in the nation) -- is up to it. 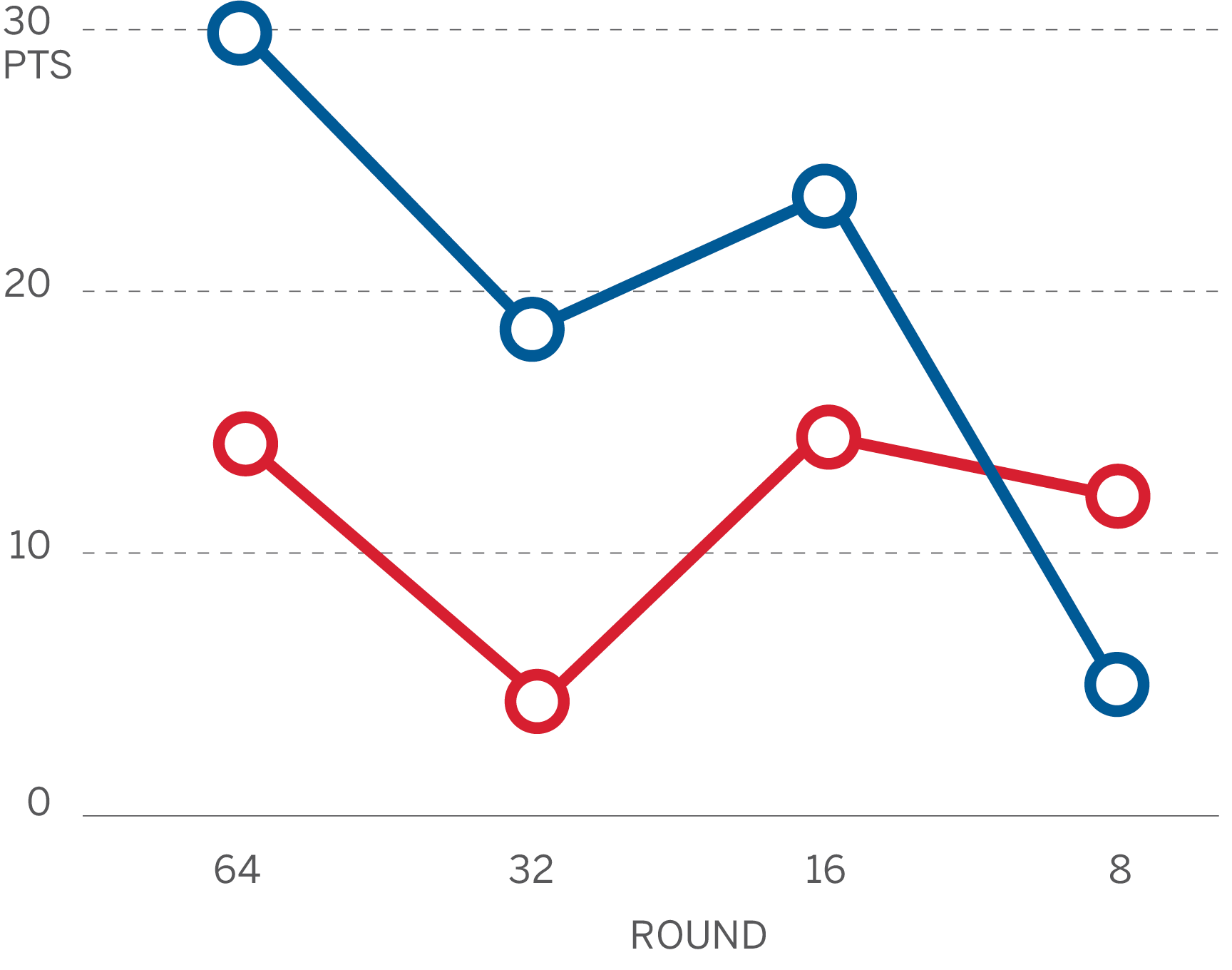 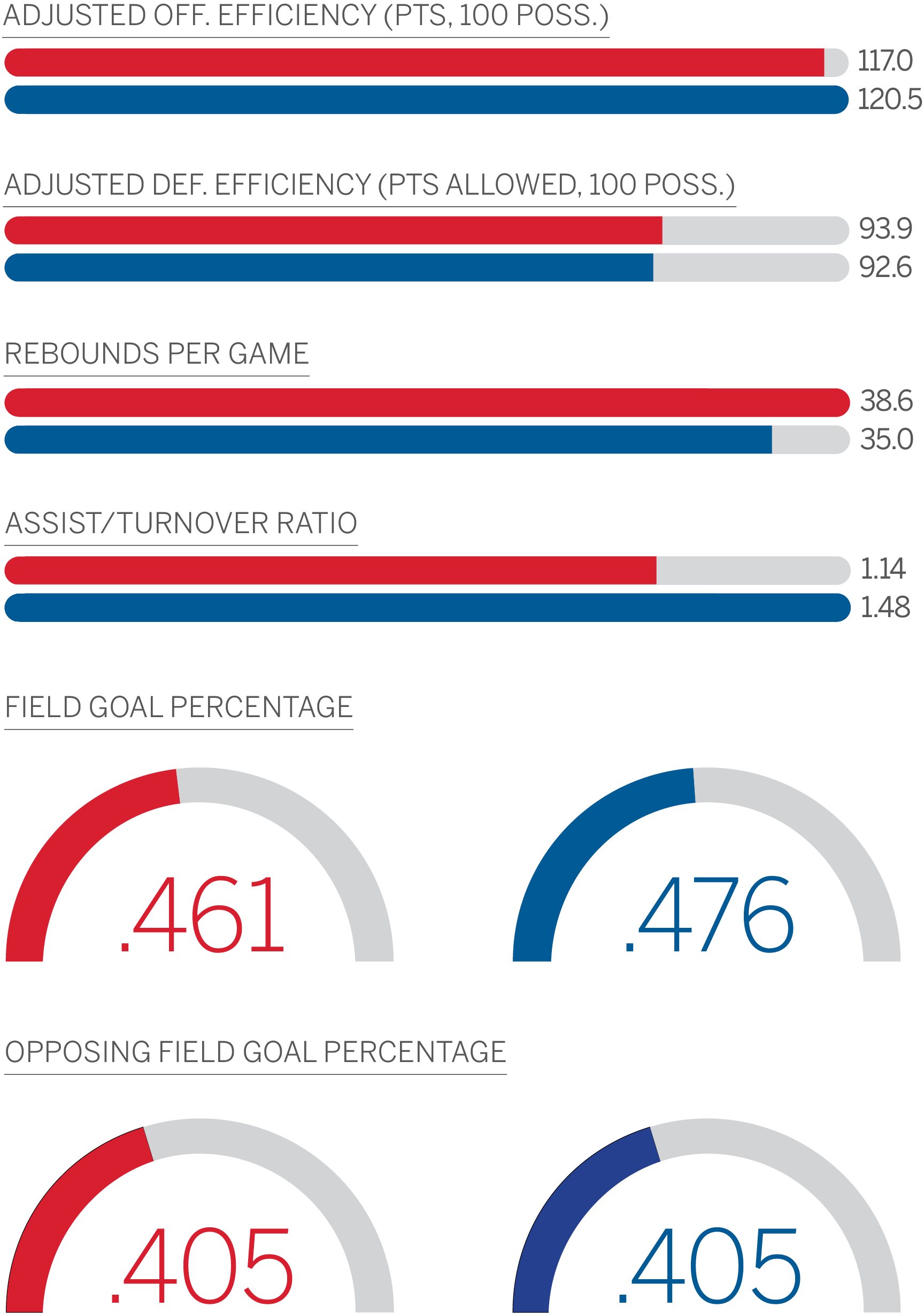 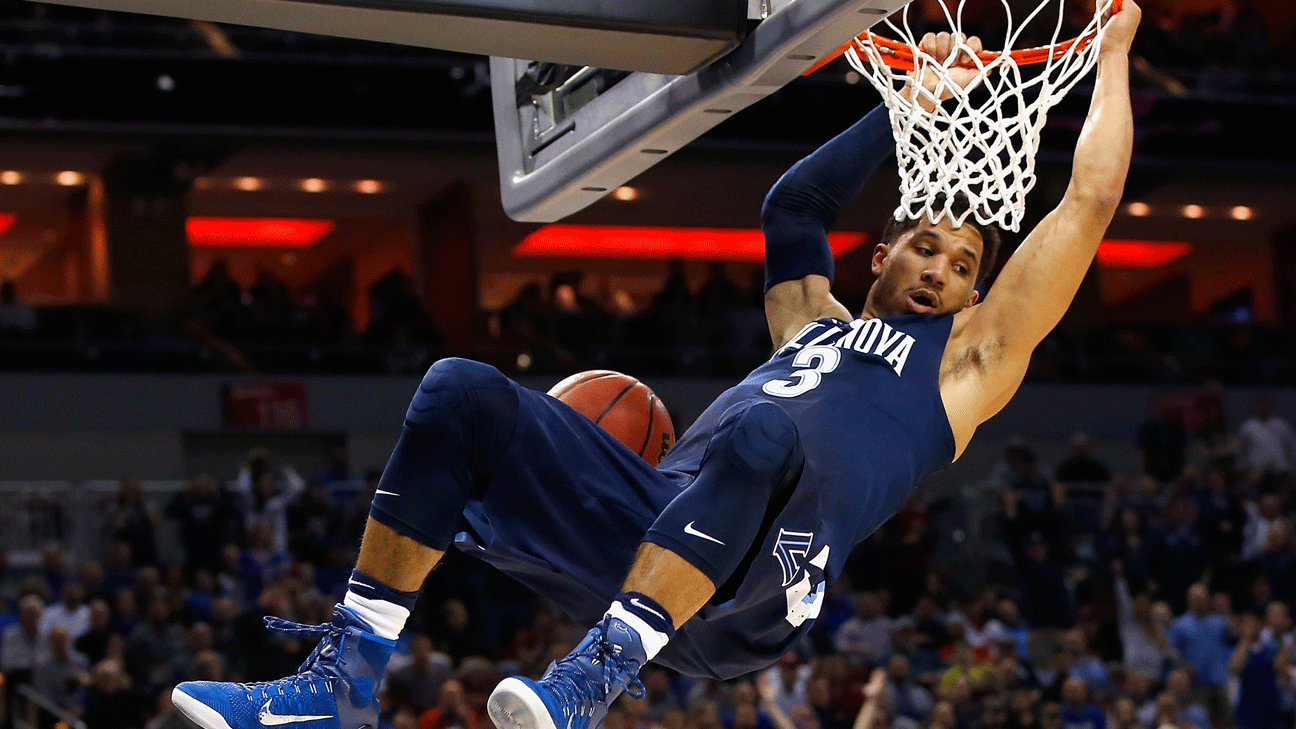 G Josh Hart, Villanova Last season's Big East's Sixth Man of the Year has had a heck of a 2016: In his junior season, Josh Hart is a starter, a swingman, and a national POY candidate as Villanova's leading scorer (15.3 points) and second-best rebounder (6.7). Hart has long been the team's best defender, and this season he's taking on more of the shooting responsibility. Though he took a full 25.5 percent of Villanova's shots this season, he actually raised his percentage on 2-pointers to 58.8 percent. He's averaging almost 14 points a game this tournament, and he's carrying Nova not only past its opening weekend hump, but all the way to Houston. 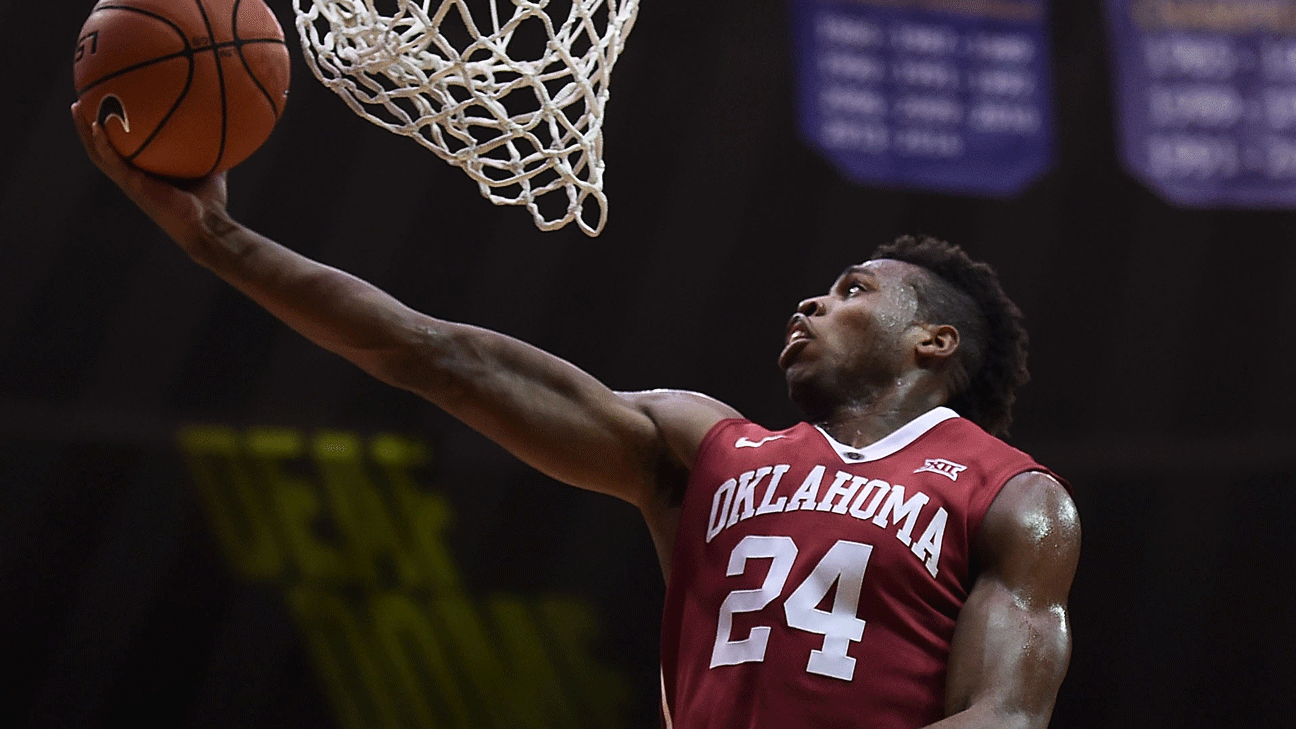 G Buddy Hield, Oklahoma It's tough to list all the accomplishments Buddy Hield set in a 37-point effort against Oregon: Most points in an Elite Eight game since 1990. Most 3-pointers (eight!) by an Oklahoma player in the NCAA tournament. Oh, and by the way, he became the Big 12's second-highest scorer in the first half. Hield's shooting has been on display all the season -- he's shooting 50.4 percent and leads all of the NCAA with 146 made 3-pointers -- and none of that changed in March. The only player with more points in a four-game NCAA tournament run? Some guy named Steph Curry.

Wins over the past three seasons for Villanova, the highest total of any team in NCAA. The senior class, including Arcidiacono and Daniel Ochefu, have 115 over four seasons.

It's not just Hield knocking them down behind the arc. Oklahoma makes 42.8 percent of its 3-pointers as a team, the second-best in rate in the NCAA this season.

Syracuse beat the odds by becoming the fourth double-digit seed and first No. 10 to reach the Final Four. But how good are their odds to emerge as national champions? According to recent history, No. 1 and 2 seeds are still your best bet. Since the tournament field was expanded to 64 teams in 1985, upper-tier teams have had big success at making it this far -- 80 of 128 Final Four teams (63 percent) and 23 of 31 national champions (74 percent) have been either a No. 1 or 2 seed. A breakdown of Final Four teams and national champions by seed since 1985: 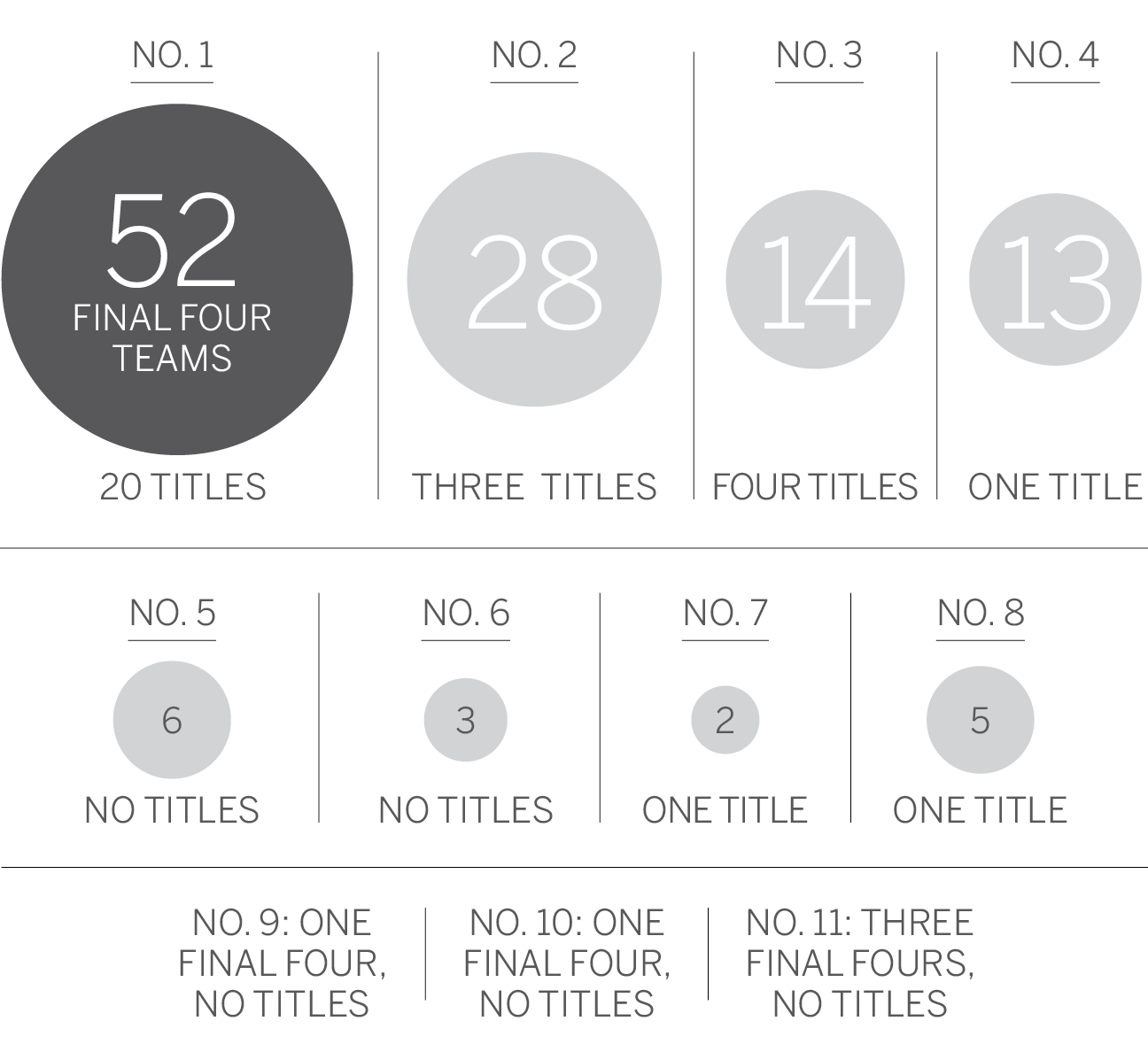 With one game between two evenly-matched 2-seeds and another matching up a 1-seed with a 10-seed, Saturday's games provide plenty of variety. According to ESPN's Basketball Power Index, which takes into account each team's strengths, among several other factors, get ready for a classic from Villanova-Oklahoma (and, well, maybe a not-so-classic in the late matchup). 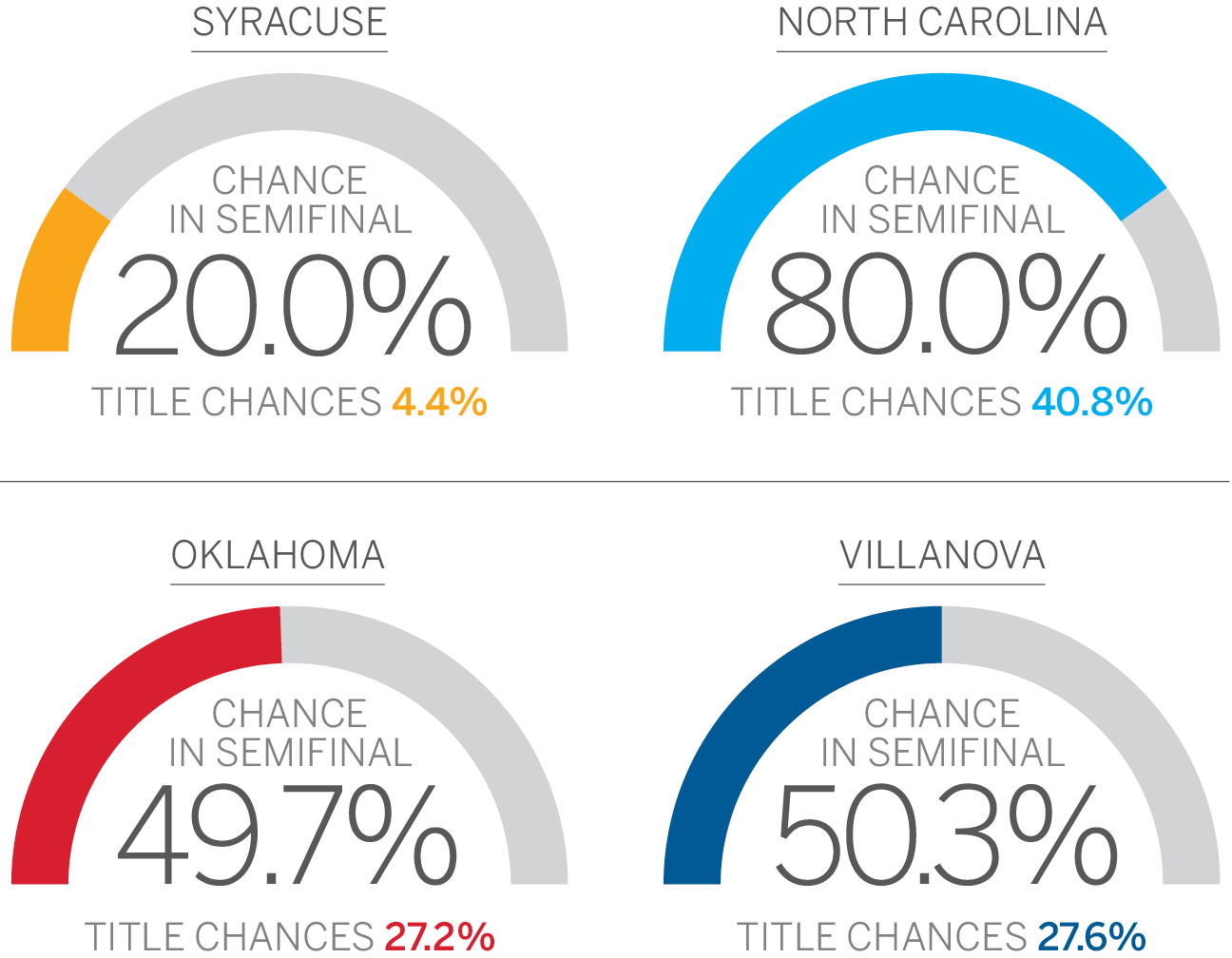