CINCINNATI (AP) -- Jon Kitna had the best game of his career
against the Pittsburgh Steelers last year. He followed it with the
worst performance of his life.

Question on the Steelers: Is this the type of game that could get Pittsburgh clicking?
Well, they beat the Bengals ... everyone looks good against the Bengals, unfortunately for their fans. But for the Steelers right now, any win is a good win. You have to start building somewhere, but I wouldn't look to this as a game that turns the Steelers' season around.

Question on the Bengals: Should coach Dick LeBeau start circulating his resumé?
I think he's OK. The way the Bengals run their front office, they don't want to pay two guys a head-coaching salary this season. So he should be safe for now at least.

Kitna threw three interceptions -- two to Lee Flowers -- and lost
a fumble while getting sacked, helping the Steelers roll to a 34-7
victory over the winless Cincinnati Bengals on Sunday.

Pittsburgh (2-3) also got a 99-yard kickoff return from rookie
Antwaan Randle El, the second-longest in team history, to open the
second half and put the Steelers ahead 31-0.

Pittsburgh's first convincing win of the season should come with
an asterisk, since it came against such a hapless team.

"They did us a favor out there, let's face it,'' said Flowers,
who matched his career total for interceptions. "We don't need to
get too high right now. We played well, but at the same time, we
were in the right position at the right time.

"Not bad-mouthing Kitna, but I thought he made some bad throws
today. It wasn't like we had to make great breaks on the ball.''

Kitna inadvertently drew up the blueprint for beating the
Steelers last December when he threw 68 times for 411 yards.
Pittsburgh went after him this time with a "Steal Curtain''
approach: Pressure the quarterback, let him throw it up for grabs
and steal it away.

"I've been playing since fifth grade,'' Kitna said. "I've
never played more poorly than I did today. I've never been more
disappointed in myself.''

Coach Dick LeBeau had joked that if his team won Sunday, he
would dive into the Ohio River. Instead, the Bengals went right
into the tank once again.

"We're the laughingstock of the league,'' running back Lorenzo Neal said. "It's embarrassing. It's a disgrace. Teams just look at
you with no respect.''

The Bengals are 0-6 for the fifth time since 1991, when they
started their run as the NFL's worst team. The bye week is coming
up, and it would be a good time for general manager Mike Brown to
make a change, if he's inclined.

"That is something I don't have to worry about,'' LeBeau said.
"He either will or he won't. That question will be answered for
me.''

Cincinnati has been outscored 123-17 in the first half this
season, setting up one blowout after another. The latest was the
worst of them all, and it started with the quarterback.

Flowers' first interception set up a 34-yard field goal by Todd Peterson that made it 10-0 and started a rapid-fire series of
turnovers that decided the game.

Flowers had another interception on the Bengals' next
possession, leading to Jerome Bettis' 41-yard touchdown run through
a huge gap in the Bengals' defense. Bettis ran 21 times for a
season-high 109 yards.

Two minutes later, Joey Porter hit Kitna from behind and knocked
the ball loose. Casey Hampton, a 320-pound lineman, caught the ball
in the air and outran his pursuers for 36 yards, switching the ball
to his left hand so he could stiff-arm lineman Matt O'Dwyer and
keep going. 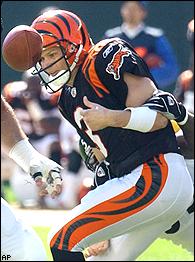 Corey Dillon finally caught Hampton from behind at the 7-yard
line, and Tommy Maddox threw a touchdown pass for a 24-0 lead
midway through the second quarter.

"Our defense played great,'' Maddox said. "We were able to
point points on the board and it snowballed from there.''

Kitna was 23-of-35 for 222 yards with five sacks and three
interceptions. He made best use of his passing shoulder by hitting
Flowers' legs on one of his interception returns.

There was plenty of slapstick by the Bengals' defense as well.

Pittsburgh receivers found huge holes in the secondary, making
it easy for Maddox. The 31-year-old quarterback had a tougher time
finding open receivers when he was slinging passes for the New
Jersey Red Dogs of the Arena Football League and the XFL's Los
Angeles Xtreme.

In only his second NFL start since 1992, Maddox was 16-of-25 for
216 yards with two interceptions against an Xtremely bad NFL
defense. Plaxico Burress had eight catches for 149 yards.

Game notes
The crowd of 63,900 was the fourth-largest in Paul Brown
Stadium history. ... Don McCall's 101-yard kickoff return against
Minnesota in 1969 is the Steelers record. ... Flowers hadn't
intercepted a pass since the fourth game of 2000, a span of 34
games without one. ... Bengals middle linebacker Brian Simmons was
limited to playing only passing downs because of a jammed left
shoulder.