CLEVELAND (AP) -- Kenny Lofton could barely talk, neither could
roughly 20,000 fans who stayed until the end or the shocked Seattle
Mariners. 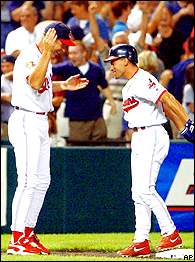 The Indians tied a major league record and became the first team
in 76 years to overcome a 12-run deficit to win, defeating the
Mariners 15-14 in 11 innings Sunday night.

Jolbert Cabrera's broken-bat, one-out single in the 11th, the
game's 40th hit, scored Lofton from second with the winning run to
end the 4-hour, 11-minute game that looked to be over when the
Mariners led 12-0 three hours earlier.

"I can't explain it," said Lofton. "It was unbelievable. I've
never been in a game like that in my life. My voice is gone from
hollering so much. It was fun. Wow."

Lofton slid headfirst into home plate ahead of left fielder Mark
McLemore's throw and jumped into the waiting arms of Eddie
Taubensee as the Indians poured onto the field and fans danced in
the aisles.

They refused to leave as the stadium speakers first blasted
Kiss' "Rock and Roll All Night", followed by "Cleveland Rocks."

"It's the turning point of the season," said Cabrera after the
Indians avoided another lopsided loss and crept within one-half
game of first-place Minnesota in the AL Central.

Cleveland scored two runs in the fourth, three in the seventh,
four in the eighth and five in the ninth -- after being down to
their last strike three times -- to become just the third team to
make up 12 runs in a game and win.

The only others to do it were the 1911 Chicago White Sox and
1925 Philadelphia Athletics, who scored 13 runs in the eighth to
beat Cleveland 17-15.

The Mariners sat quietly in their clubhouse shaking their heads.

"We had them down with two outs in the ninth," said Seattle
manager Lou Piniella, "and they came back and tied it. It's just
one of those things that happen. It's almost impossible to do, but
they did it."

John Rocker (3-4), Cleveland's fifth pitcher, struck out the
side in the 11th as the Indians snapped a three-game losing streak.

Lofton singled with one out in the 11th off Jose Paniagua (3-3),
and Omar Vizquel singled to right.

"I had to freeze to make sure it was going to drop," Lofton
said. "And when it did, I was off to the races. After I got up off
the ground, Eddie picked me up like a little kid. Man, that was
fun."

The Indians had 23 hits, with Lofton, Vizquel and Cordova
getting four apiece.

"I told Omar if he went up there and stayed patient, `You can
triple into the right-field corner"', Manuel said.

Most of the Indians starters, including Roberto Alomar, Juan
Gonzalez, Ellis Burks and Travis Fryman, had been replaced and many
fans headed home by the time the Mariners opened a 14-2 lead in the
fifth.

Cleveland's rally began in the seventh when Branyan led off with
his 15th homer, a shot off starter Aaron Sele.

The Indians closed to 14-5 later in the inning on a two-run
single by Cabrera off John Halama.

The Indians scored four more in the eighth, with Thome's second
homer -- his AL-leading 36th -- getting them rolling. After Branyan
was hit by Halama, Cordova homered to bring Cleveland within six.

Piniella lifted Halama, but Norm Charlton couldn't stop the
Indians, either, and Vizquel's RBI double made it 14-9.

Still, the Indians were down by five and had a runner on with
two outs in the ninth when Cordova doubled, and Piniella turned to
Jeff Nelson.

Wil Cordero walked to load the bases, and Einar Diaz went to a
full count before hitting a two-run single to make it 14-11.
Kazuhiro Sasaki, who came in with 35 saves, gave up a single to
Lofton, loading the bases for Vizquel.

Vizquel also worked the count full before ripping his triple
just inside the bag, scoring all three.

Suzuki and Mike Cameron had three RBIs apiece as the Mariners
appeared to be sailing to their 81st win.

Cameron's two-run double highlighted Seattle's season-high,
eight-run third when the Mariners were embarrassing the Indians
before a sellout crowd on national TV.

The Mariners (80-31) had their four-game winning streak stopped,
and for one of the only times this season, things didn't go their
way. Seattle's bullpen has been nearly perfect this season.

"They kept battling back," Charlton said. "We should have put
them away and we didn't do it. We don't like losing if it's this
way or 1-0. We don't expect to lose."

Game notes
Cleveland came back from a 10-0 deficit to win in 1984. ...
Suzuki's second-inning single tied Alvin Davis' club rookie record
with 161 hits. ... Burks, who hadn't played in the Indians'
outfield since July 15, started in left. Burks made a diving catch
to rob Olerud in the second. ... Hall of Fame football coach Don
Shula threw out the ceremonial first pitch.