CHICAGO (AP) -- As the Colorado Rockies threw the ball around the
infield, Ricky Gutierrez waited for his opportunity. 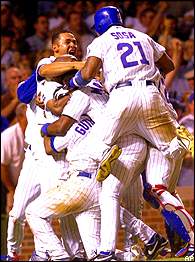 Gutierrez scored the winning run on a wild, botched
rundown by Colorado in the ninth inning to give the Chicago Cubs to
a 5-4 win Tuesday night.

"It was basically chaos and I'm not even sure it was
organized," said Joe Girardi, whose single started the chaotic
final play. "But it worked out for us."

With runners on first and second and one out, Girardi singled to
left field. Gutierrez fell coming around third base and quickly
retreated.

"I probably would have scored easy if I hadn't stumbled around
the base," Gutierrez said.

But Girardi was caught between first and second. Catcher Sal Fasano threw to shortstop Juan Uribe, who got Girardi in a rundown.
Uribe threw to first baseman Todd Helton, who took a few steps
toward home to make sure Gutierrez didn't try to score.

Helton threw to pitcher Gabe White, who was covering first, to
get Girardi for the second out. Gutierrez then sprinted home and
slid in safely ahead of White's throw.

"I was just trying to find a chance to score and I was able to
sneak in," Gutierrez said. "I was relieved. If I would have been
out, I probably wouldn't have been able to leave tonight. I'd have
to stay and wait until tomorrow morning."

The Cubs poured out of the dugout in a wild celebration. The
Rockies lost for the 34th time in 44 games but none ended in as
bizarre a fashion as this one.

"I thought their guy did a great job of scoring," Colorado
manager Buddy Bell said. "I think you have to give credit to him
rather than put blame on anyone else."

Kyle Farnsworth (2-3) pitched 1 1/3 hitless innings for the win
as Chicago moved 2½ games ahead of Houston in the NL Central with
the win.

Justin Spier (0-1) allowed singles to Gutierrez and Sosa to open
the ninth and got the loss.

Fred McGriff hit a two-run single that put Chicago ahead 3-2 in
the seventh. Ron Coomer had a pair of doubles and a sacrifice fly.

Helton hit his 35th home run and added a double for the Rockies.
Colorado scored two runs in the eighth off reliever David Weathers
to tie the game at 4. Helton had a sacrifice fly and Alex Ochoa hit
an RBI double.

Cubs starter Kevin Tapani allowed two runs and six hits in seven
innings, but remained winless in his past 11 starts.

Colorado starter Denny Neagle gave up one run and six hits in
six innings and left with a 2-1 lead.

However, reliever Jay Powell walked one and hit two batters in
the seventh to load the bases with one out. McGriff's two-run
single off Mike Myers put the Cubs ahead 3-2 and Coomer added a
sacrifice fly to make it 4-2.

With one out in the sixth, Coomer tried to score from third when
Neagle's pitch hit off catcher Adam Melhuse's glove. Melhuse
recovered and threw to Neagle who tagged out Coomer on a close
play.

Game notes
Cubs RHP Kerry Wood will miss his scheduled start on
Thursday with a sore shoulder. ... Coomer has 15 hits in his last
39 at-bats. ... The Rockies reinstated RHP Kane Davis from the
15-day DL. He had been out since July 8 with right elbow
inflammation. In 36 games, Davis is 0-3 with a 4.36 ERA.