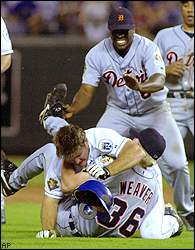 Sweeney delivered another hard hit, charging the mound and
throwing Jeff Weaver to the ground before the Detroit right-hander
even threw a pitch as the Kansas City Royals beat the Tigers 7-3.

Numerous punches were thrown as the benches and bullpens cleared
in the sixth inning. There was a 12-minute delay and Sweeney,
Royals pitching coach Al Nipper and Detroit bench coach Doug
Mansolino were ejected.

"I wish that it never happened. But in the same breath, he
called me out," Sweeney said. "I've always been taught to respect
the game and play the game hard. I thought he crossed the line
tonight."

The problems began as Sweeney got ready to bat with two outs and
a runner on second base. He asked plate umpire Mike Fichter to have
Weaver move the resin bag from a distracting spot on the top of the
mound.

Replays showed that Weaver said something to Sweeney and turned
his back. Sweeney threw his batting helmet at the pitcher and
rushed the mound.

Sweeney is regarded as one of the more mild-mannered players in
baseball while the 6-foot-5 Weaver worked as a security guard at an
April taping of the "Jerry Springer Show."

Sweeney said he charged after Weaver called him profane names.

"It's something I've never done before and it's something I'm
not proud of. But I had to do it," Sweeney said. "Weaver is a
talented young pitcher, but I'd like to see him respect the game
more. Tonight, what he did was uncalled for and I did what I did."

Weaver, on the other hand, claims he said nothing to Sweeney.

"I told the umpire that I was not moving the resin bag because
I didn't put it there," he said. "(Sweeney) saw me walk away from
the mound and then I saw a helmet being thrown at me. If I had
(said something controversial) I would have kept an eye on him. I
turned around and a helmet is being fired at me."

"He has no problems hitting me, so I don't know what the whole
deal was," he said.

Players, coaches and Kansas City manager Tony Muser got into the
fray.

As things started to slow down, Muser and Tigers outfielder
Wendell Magee began exchanging words. As more punches were thrown,
several players went after Sweeney, who had been pulled from the
mass of players.

Each manager, naturally, defended his players.

"When Michael Sweeney tells me something, I take it as
gospel," Muser said. "Weaver messes around with the resin bag and
then lays it up near the rubber, where it is distracting.

"Michael asked him to move it down. When he asked to have it
put down the second time, Weaver said something to him, and that's
when Michael went."

Detroit manager Phil Garner called it "the most vicious thing
I've ever seen."

"It was without provocation, as if that makes a difference, but
I don't think Weaver said anything to Sweeney. Sweeney charges the
mound when Weaver had his back to him, and fires his helmet, then
proceeds to knock him out of the game.

Sweeney probably is looking at a suspension, but he did not
regret his decision.

The Tigers were leading 2-1 at the time of the fight. When play
resumed, Dave McCarty replaced Sweeney and walked, and Raul Ibanez
hit a tying single.

After a wild pitch, Weaver (10-11) hit Mark Quinn with a pitch,
loading the bases, and was pulled.

"I definitely was trying to catch my breath. You lose a little
stamina," Weaver said. "What annoys me is that we let them do
exactly what they were trying to do, and that is take me out of the
game. I just wish I would be able to determine the outcome of the
game, and that's not what happened."

Reliever Matt Perisho got Dee Brown to hit a routine fly, but
center fielder Roger Cedeno had the ball glance off his glove for
an error that allowed three runs to score.

The oddities were not done, either.

Shane Halter led off the seventh with an inside-the-park home
run. The ball caromed off the top of the wall in left field, and no
Royals backed up the play as Halter circled the bases ahead of
center fielder Carlos Beltran's throw.

Paul Byrd (5-4) picked up the win, giving up one earned run in
six innings.

Blake Stein picked up his first major league save by pitching
the final three innings. After giving up the home run to Halter, he
retired the final nine batters he faced.

Game notes
Beltran wasted little time in setting the Royals' club
record with his 33rd consecutive stolen base. He stole second base
in the first inning on an 0-2 pitch to Sweeney, his 18th swipe of
the season. Beltran last got thrown out on Sept. 20, 1999, in
Seattle. The AL record for consecutive steals is 40, set by Tim
Raines with the Chicago White Sox between July 23, 1993, and Aug.
4, 1995. The major league record is held by Vince Coleman, who
swiped 50 straight between Sept. 18, 1988, and July 26, 1989, as a
member of the St. Louis Cardinals.St. Louis Cardinals