NEW YORK (AP) -- Derek Jeter dived headfirst into the stands. He
was not going to let this ball, or this series, get away.

As Jeter solidified his place in Yankees' lore, the three-time
defending World Series champions became the first team ever to win
a best-of-five series after losing the first two games at home.

And as Yankees manager Joe Torre and New York City Mayor Rudolph
Giuliani walked off the field arm in arm, fans stood and cheered a
team whose grit and determination mirrors that of the shaken city,
attempting to recover from last month's attacks on the World Trade
Center.

"There was no question we knew there was a great deal of
responsibility on our shoulders," Torre said. "We did have a
piece in our heart of what went on and all the people that we take
for granted."

After falling behind early, the Yankees seized on Oakland's
youthful nerves to beat the A's in five games for the second
straight year and advance to a repeat matchup against the Mariners
starting Wednesday in Seattle.

"We're not going home until somebody beats us," Jeter said in
the noisy Yankees' clubhouse.

Alfonso Soriano started New York with a two-run single, the
Yankees created two runs from three errors and David Justice capped
the comeback with a pinch-hit home run into the right-field seats --
his first RBI in 62 at-bats since Sept. 5.

Then came Jeter, whose amazing backhand flip to the plate
following an overthrow preserved the Mike Mussina's 1-0 win in Game
3 -- and turned the series.

After getting two hits to break Pete Rose's postseason record
with 87, Jeter showed the heart and skill of a champion. 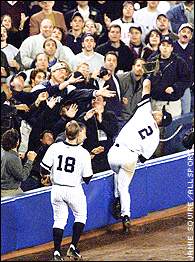 With a runner on first in the eighth, he dived into the
photographer's box behind third base to catch Terrence Long's foul
pop. The runner advanced, but was stranded, and after the inning
Jeter bandaged his elbow cut.

Jeter never thought about the possibility of losing.

"You make your own breaks," he said. "You worry about the
things you can control."

"Everything that this city has gone through and the fans have
gone through, just the opportunity to give them something to cheer
about was a joy," Roger Clemens said. "They were so loud."

And so there was joy in baseball's most storied landmark. Before
the game, as a policeman sang the national anthem, there were
poignant reminders of the tragedy and trauma.

New York, trying to become only the third team to win the World
Series four straight times, moves on with renewed confidence that
nothing is outside its grasp.

"If you lose playing well, you tip your hat," Howe said.
"Tonight we contributed quite a bit to our demise."

Clemens, his pant legs hiked up in tribute to teammate Orlando
Hernandez's victory in Game 4, fell behind 2-0 in the first two
innings. The Giambi brothers hit RBI singles that put Oakland
ahead, with Jason -- who went 4-for-4 -- connecting in the first
after Johnny Damon's leadoff double and Jeremy in the second
following Long's double.

"We actually were loosey-goosey," Howe said. "We scored a
couple of runs early and felt good about ourselves."

But then the Yankees' resolve, the refusal not to give in that
has led them to four World Series titles in five years under
manager Joe Torre, kicked in while the A's buckled.

"The fact that nobody's ever done this doesn't mean it can't be
done," Torre said.

Soriano, one of the rookies added this year to an ever-changing
roster, started it with a two-run single in the second off Mark
Mulder, who had shut down the Yankees in the opener.

Soriano's hit came after Scott Brosius, in a horrible slump,
loaded the bases when he was hit by a pitch on the foot.

Then the A's, the team seemingly on the verge of a breakthrough
season, turned from brash to bumbling, and an attitude that seemed
so solid in winning twice at Yankee Stadium last week went from
juiced to jittery.

An innocent strikeout by Bernie Williams started the collapse in
the third. The ball skipped away from catcher Greg Myers, who got
it in plenty of time to throw to first for the out, but his throw
bounced under the glove of Jason Giambi at first and into right
field as Williams reached.

Tino Martinez was hit on a hip by a pitch and Shane Spencer
loaded the bases with a two-out walk. Brosius then hit a grounder
to third and Eric Chavez, appearing distracted as Martinez crossed
in front of him, let the ball pop out of his glove as Williams
scored the go-ahead run.

"You can't give a team like that extra outs," Mulder said. "I
walked a few guys, hit a few guys and you can't do that with these
guys."

Jason Giambi hurt the A's again in the fourth after Chuck
Knoblauch led off with a single. Mulder picked Knoblauch off first,
with Giambi having plenty of time to make the play, but his throw
to second was wide and low.

Randy Velarde bunted Knoblauch over and Jeter's sacrifice fly
made it 4-2.

The best example of the struggles by the A's came in the fifth.

Jason Giambi hit an RBI single off Mike Stanton, who had just
replaced Clemens, but Miguel Tejada failed to go from first to
third on the play. It became costly when Chavez flied to right, a
ball Tejada could have scored on.

Giambi and Tejada had an animated discussion after the inning,
with the MVP first baseman jabbing his finger at his teammate.

"I didn't want to rush and get thrown out," Tejada said. "He
said I had to go. I told him I was watching the coach."

About an inning later, they had a talk in the dugout and
appeared to make up.

"I thought it was a great opportunity," Giambi said. "It was
no big deal."

These Yankees pounce on anything. A little thing suddenly
becomes big.

"Everything comes to an end -- the Lakers, the Celtics,"
Justice said. "Had they played a better game than us, we'd have
come to an end."

Game notes
New York was the 11th team to lose the first two at home in
a best-of-five. ... Clemens, pitching with an injured hamstring,
had troubles with most of his pitches but kept his team in the
game. New York was the 11th team in a best-of-five series to lose
the first two at home, but played as if pressure was nonexistent.
... Oakland put a jersey in its dugout of Jermaine Dye, the cleanup
hitter who broke his left leg on a foul ball Sunday. ... Both Andy
Pettitte and Mike Mussina warmed up in the bullpen during the game.
... Oakland C Ramon Hernandez left in the third inning because of a
sprained right wrist. ... With Justice's 14th postseason homer, he
moved into fifth place on the career list. He leads with 55 RBI.