SAN FRANCISCO (AP) -- Curt Schilling says he's better this season
than last. And he appears on his way to proving it. 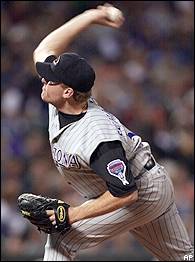 Schilling became the first 10-game winner in the majors
Wednesday night, retiring the first 15 batters in the Arizona Diamondbacks' 7-3 victory over the San Francisco Giants.

"This is as important a game in May as there can be,''
Schilling said. "We're leaving here in first place no matter
what.''

The Giants fell 1½ games behind Arizona in the NL West going
into Thursday's series finale.

But a series of miscues in the sixth led to three San Francisco
runs.

Schilling hit Tsuyoshi Shinjo with a pitch and Ramon Martinez
singled for the first hit. Both runners advanced on Schilling's
wild pitch to Damon Minor and scored two outs later on David Bell's
triple that ricocheted at a weird angle off the right field wall.

Bell scored on Barry Bonds' line-drive double off the wall in
right to narrow Arizona's advantage to 5-3.

Schilling's only loss in 12 starts this season came April 17
against St. Louis. He has won all three starts following Arizona
losses.

Last season, Schilling won 22 games for the Diamondbacks and was
runner-up to teammate Randy Johnson for the Cy Young award.

Ortiz got out of a jam in the first inning when he loaded the
bases with no outs. But he struck out Mark Grace before Jose
Guillen lined into a double play.

He wasn't so lucky in the second. After loading the bases again,
he hit Junior Spivey with a pitch to make it 1-0 Arizona.

The Diamondbacks scored four runs in the sixth. Damian Miller
and Craig Counsell each hit RBI singles, while Mark Grace drove in
a pair of runs on a double.

"I just kept trying to make the best pitches possible and not
give in to them one bit,'' Ortiz said. "I just couldn't get ahead.
The times I did get ahead I got guys out. But I ended up getting
deep into counts and throwing a lot of pitches.''

Bonds, batting .293 with six career homers against Schilling
going into the game, was 1-for-3.

Bonds remained one homer away from matching Frank Robinson in
fourth place on the career list with 586. This season, Bonds has 18
home runs to match Chicago's Sammy Sosa for the major-league lead.

The Diamondbacks, tied with San Francisco for the NL lead with
58 homers, have not hit one in five straight games, their longest
drought of the season.

Game notes
Arizona C Damian Miller left the game in the seventh
inning with a mild groin strain. ... Shinjo left the game in the
seventh inning after he was hit in the arm by Schilling in the
sixth. X-rays were negative. ... Erubiel Durazo was not in the
Arizona lineup for the third game because of soreness in his right
hand. Durazo also was in the midst of an 0-for-16 slump. ... Giants
reliever Jason Christiansen, who has been on the disabled list
since April 20 with left elbow tendinitis, was scheduled to undergo
ligament reconstructive -- or "Tommy John'' -- surgery on Thursday.
The 32-year-old left-hander was expected to miss 11 to 14 months,
Giants' trainer Stan Conte said.